Saturday morning was Mario Kart 8 time for the kids with the release of the first DLC pack. The courses are pretty good, but even if they hadn’t been I’m sure they still would have had some good fun.

It’s rare they want to spend that much time together without getting into a fight or three. 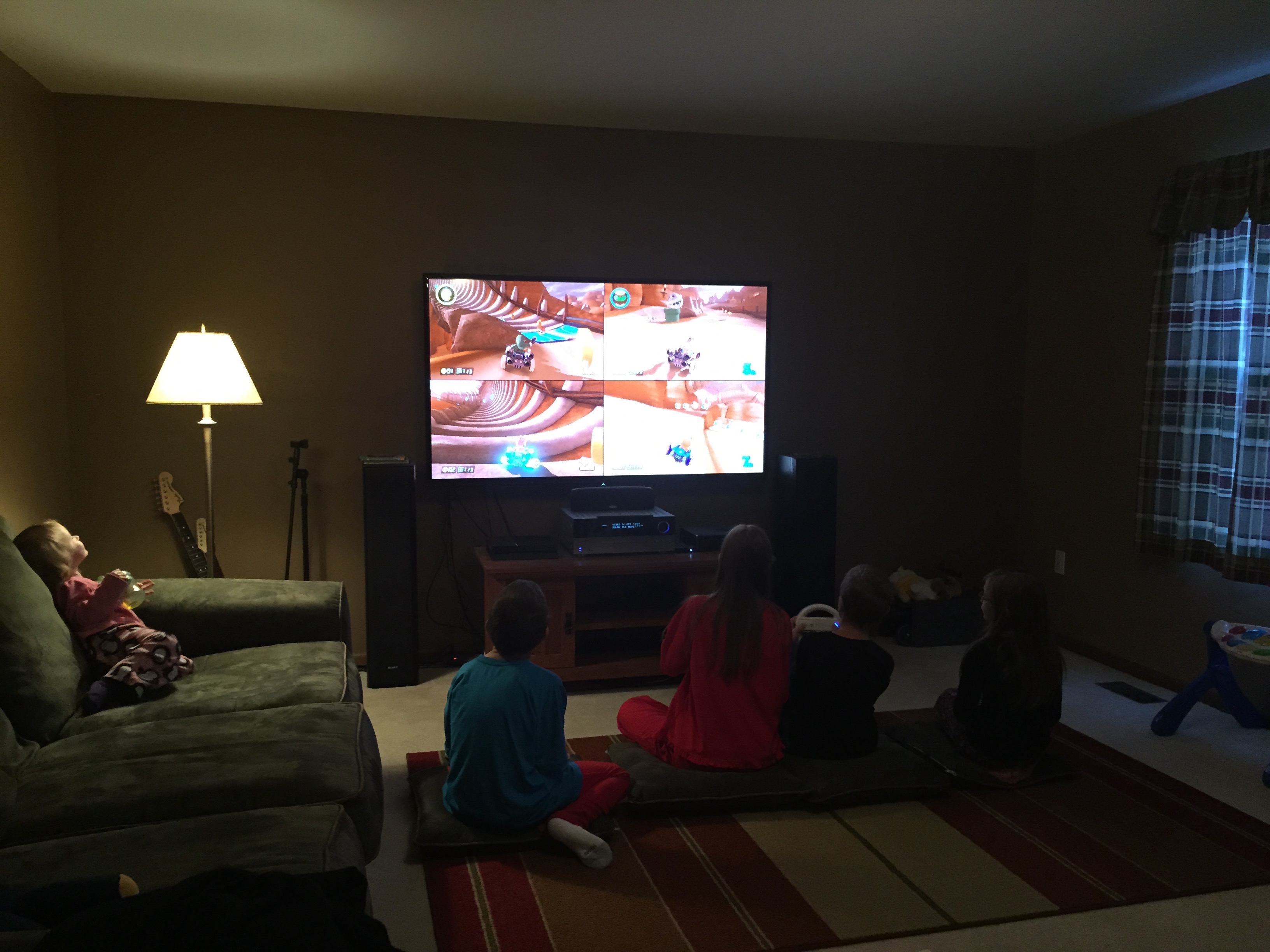 I somehow missed this when it was first published, but Kotaku has republished a really fascinating look at Nintendo’s Treehouse division, what they do, and the amount of work they contribute to making their North American localizations what they are.

Say what you will about Nintendo’s hardware, its recent software design foibles, or their crazy attitudes towards online services—they know how to do localization well. And it’s a team that appears to have long-term cohesion:

After a brief tour of the facilities, I was ushered into one of the conference rooms—I think it was the one named Magikoopa—to meet with some of the core members of the Treehouse, all people who have been there for at least a decade. With me was Nate Bihldorff, best known for writing English for all of the Mario & Luigi RPGs; Leslie Swan, who helped found the localization department almost a decade and a half ago; Tim O’Leary, a grizzled veteran translator; Rich Amtower, who helped localize several Final Fantasys and other big Square RPGs; and Reiko Ninomiya, who ran translation on the critically-acclaimed (and super-popular) Animal Crossing: New Leaf.

It’s an enormous amount of work to translate some of the games Nintendo is producing:

“[We spent] three years working with the development team, cause again they consulted us really early, talking about [in-game events] and some things like that,” said Reiko Ninomiya, who headed up localization on New Leaf. “And then actual heads-down in the files… a year and three months.”

And somewhat unsurprisingly, there’s a strong culture of saying “no” to things that won’t work:

Give it a read; it’s pretty fascinating. No matter what the future holds for Nintendo, with their current mainline console flailing in a competitive market, I hope they never lose this kind of thing.

Buried within an announcement of another Pokemon movie, The Pokemon Company revealed today that Pokemon X and Y for 3DS have reached sales of 12 million units. According to the company, the latest installments in the gotta catch ’em all RPG series have helped the franchise reach sales of 245 million games sold to date.

Pokémon is still amazingly relevant. And the games are still really good. If you haven’t bought X or Y yet, go for it.

Jeremy Parish is continuing his rather interesting Anatomy of a Game series with a look at Super Metroid:

Sometimes it seems a little hard to believe that Nintendo created Super Metroid. It’s such an un-Nintendo-like game — so somber and moody, so straight-faced, so rich with narrative innovation that feels nothing at all like what we’ve come to expect from Nintendo. And yet, it’s quintessentially classic Nintendo in many ways: It leads you along with unspoken hints, gives you many tools without over-complicating things, rewards you both for being focused and for being curious, and like A Link to the Past represents such a perfect expression of a game concept that no one has managed to truly best it without building on its foundation.

There probably hasn’t been a better time to add his RSS feed to your reader. Super Metroid is perhaps the finest 2D game ever made and if you have never stopped to think about how it’s put together, you’ll likely enjoy reading along.

If you stop and think about it, on one system, in the space of a handful of years, Nintendo was arguably at its peak, with Super Mario World, The Legend of Zelda: A Link to the Past, and Super Metroid all appearing on the SNES. All three games are masterworks, and if you have never experienced them, I would urge you to get your emulator on and see what the fuss is all about.

Oh, Nintendo. This is not the problem.

Tiny Cartridge reminded me of this quote from John Gruber’s most recent post regarding the 3DS and Nintendo’s level of doomed-ness:

I’d argue this is a bit out of touch; I don’t know too many parents who don’t see a big, big difference between a $169 3DS XL ((The 3DS XL is the model I’d argue anyone who wants a 3DS should purchase.)) (or especially the 2DS’s new $129 price point) and an iPad mini that retails for a minimum of $329. ((And I ask my children to save their money and purchase the devices themselves. They get $5 a week in allowance, so my son’s diligence in saving for his 3DS was commendable.))

I said earlier today that these devices are in different markets; the price points simply underline that.

Hey, so people are still talking about this, apparently.

In case you missed it, lots of people are discussing Nintendo’s introduction of a 3DS system (which is crazily but accurately called the 2DS) that lacks one of the main points of the system (the glassless 3D) just to drop the price $40. This has stimulated a lot of talk about how Nintendo is doomed. To many, the only way to save the Nintendo ship is for them to start making iOS games, and quickly.

I could link articles on this all day, but I’d rather keep what I have to say. Comments or questions are welcome. Salient points:

It’s too Early to Judge the 3DS (or the 2DS, for That Matter)

It’s not as popular as it was ten years ago, but Pokémon is still a force. I predict it will drive a lot of 2DS unit sales. ((For the record, I’m bullish on the 2DS.))

Nintendo waited two years before releasing Diamond and Pearl for the DS, just like they have for the 3DS. Nintendo plays a long game in general—but in another segment, that’s not working in their favor.

Yes, The Wii U Is a Failure, and Here’s Why

They launched the Wii U without any compelling games and a split SKU strategy that made no sense. ((Nintendo appears to be fixing this bit I think it’s happening way too late.))

New Super Mario Bros. U is actually a really good 2D Mario game, but it’s not a barnburner by any stretch of the imagination, nor does it do anything unique with the hardware available. It was the only interesting thing available at launch that wasn’t available on other platforms, and other interesting games are only just now starting to appear.

The Wii U hardware itself is pretty novel and it has some promise that’s still not being exploited properly. It’s just that Nintendo hasn’t done anything to show off what it can do to the point that I’m curious what (if anything) they had in development when they designed the hardware.

For a company that designs hardware and software in tandem, it sure doesn’t look like it (yet) with Wii U.

Wii vs. Wii U: Markets Change

Nintendo’s other mistake when launching was courting third-parties to port (in some cases pretty old) titles to Wii U for launch. I just looked at my game shelf. I have a good number of Wii games sitting there, and not one of them is a multi-platform title.

The Wii was a weird aberration; an underpowered piece of hardware with a (then) novel control system. In many ways, it mirrors the original DS. Nintendo found a success marketing to people who hadn’t been marketed to before, and captured the attention of a consumer segment that until then wasn’t interested in buying a game console.

In 2013, the Wii U suffers from a dearth of Nintendo franchises ((So far, it’s Pikmin 3, a New Super Mario game and DLC pack, and an upcoming remake of an old Zelda game.)), mini-game collections have largely (if not completely) been subsumed by iOS free-to-play games, and the music game genre has dwindled to near-nothing due to overexploitation.

Given the current state of the games market, Nintendo’s reaching out to independent game studios is a good sign, but it’s not a compelling reason to buy a Wii U instead of something else. Much like the Virtual Console, it’s a reason to spend money once you have one.

Nintendo should do what it did with the DS once upon a time: create compelling first-party experiences using their franchises to sell units. A new IP or three wouldn’t hurt, either. ((Marco Arment realizes this. So does John Siracusa.)) (Nintendo hasn’t created a successful new IP since the Gamecube days.)

iOS Is (Hopefully) a Different Beast

Making iOS games is not in Nintendo’s DNA and I firmly believe they will go down fighting before they publish a game on iOS. (They have already published an app in the form of the Pokédex.)

Reasons I say this:

Apple’s not really competing in the same space. I agree with Lukas Mathis that the 3DS and other game systems are not the same market as iOS gaming. The use cases are fundamentally different.

I do think that this new segment of mobile gaming is stealing consumers from the more traditional handheld market. They are taking those market segments the Wii managed to reach and siphoning them off; it’s questionable traditional game consoles will see them again, though not for lack of trying.

There’s still a core audience that will continue to purchase and use consoles and handhelds. I’m not sure how much longer that’s going to last, but you should want it to if you like games. Take a look at the iOS top 25 grossing games chart and see the types of games that are in there.

I don’t want that becoming the dominant force in games, and if you care about the form, neither do you. ((cf. The Loudness Wars, The Megapixel Myth.))

All This Distracts from Nintendo’s Real Weakness

(But that’s a topic for another day.)

I don’t know why, but I find this tweet/picture amusing:

Mr. Miyamoto meant it when he said he wanted In-N-Out! pic.twitter.com/6JR1PuCiXH

The biggest surprise of this whole thing (especially if you have never used one before) isn’t really how much better the updated Wii U will be, but how bad the launch version of the Wii U is with loading times.

And games are just about as bad so far from what I have played. LEGO City Undercover is a great game, but it has some horrible load times.