With patch 2.0 to Destiny 2 this past Tuesday, the way weapons and ammo are organized within the game has fundamentally changed. It’s been confusing for some people, so I thought I’d try to explain it, if possible.

To start, here’s the easiest way to look at it:

If pushed to write this in one sentence, it would be: weapon slots and ammo types have been decoupled.

Trust me: that’s the easiest way to phrase it I can come up with right now. If you want to learn more about the system, keep reading, and let’s talk about Destiny 1 and 2 and their weapon and ammo systems and how they have evolved.

Since I have been thinking a bunch recently about broadcast graphics and best practices, I decided that it might be a good idea to take a look at some examples of television broadcasts and what they have established.

I’d written about this before, but it’s often the case that Twitch broadcasts don’t pay much attention to “broadcast safe” areas even though it’s true that many people now watch Twitch streams on televisions. TVs have to deal with the rather annoying but real matter of overscan. (I may write more about this later.)

Something specific that I use on my stream and I’d love to see more of on event streams—specifically fighting game tournament streams—is a ticker across the bottom of the screen. (I’m actively researching and hoping to build one.) ESPN has been using one for a long time. Here’s what I found when I took a look at it:

I had to match them up by eye, and the screen capture isn’t an exact science, but I’m pretty sure they reserve the bottom 100 pixels of a 1080p signal for the ticker. The bottom 50 pixels receives absolutely no information; it’s just a grey stripe. This is “blank” because many televisions will not display this information at all due to overscan. The ticker information is placed within the next 50 pixels, and there’s even a bit more margin before the text baseline.

You can also see that there is a bounding line to the left, where they do not place any text information. That line is 84 pixels from the left of the frame.

It’s clear that if you want a fighting game to be broadcast safe, you will have to adjust at least the UI elements of the scene, if not the output of the console itself. As I mentioned in a tweet recently:

BBCF leaves you exactly 40 pixels at the bottom of the frame if you display the game at full-size and are compositing at 1080.

(There is even more information available in that thread talking about this, including the fact that Mortal Kombat’s meters are pushed way to the edge of the frame.)

As was pointed out to me on Twitter by @logichole, who has had some pretty great back-and-forths with me on this subject:

Having everything inset by 15% during Evo finals for ESPN2 was a reaction to that. Weird compromise, but broadcast standards…

Is this something streamers should concern themselves with? Do we care if our broadcasts are being shown on televisions with overscan? Toss me a tweet reply or write up a post and let me know what you think.

Yes, I bought an iPhone 4S. And today I needed to eat lunch. So with that in mind, let’s consider the following situation:

What is the natural outcome?

The subject of today’s post is the Reuben sandwich. Consider the Reuben. It is an uncommon concoction of bread, cold cuts, kraut, and salad dressing.

It is also uncommonly good. You know the situation: you look at the menu and you see the Reuben. Your eyes then go over the remainder of the menu, but always come back to the Reuben.

Maybe you order it, however reluctantly. But in the end, no one ever says, “I wish I hadn’t ordered the Reuben.”

So let’s make one.

First, get the griddle nice and warm: 350° F. Then we throw the first steps on there: 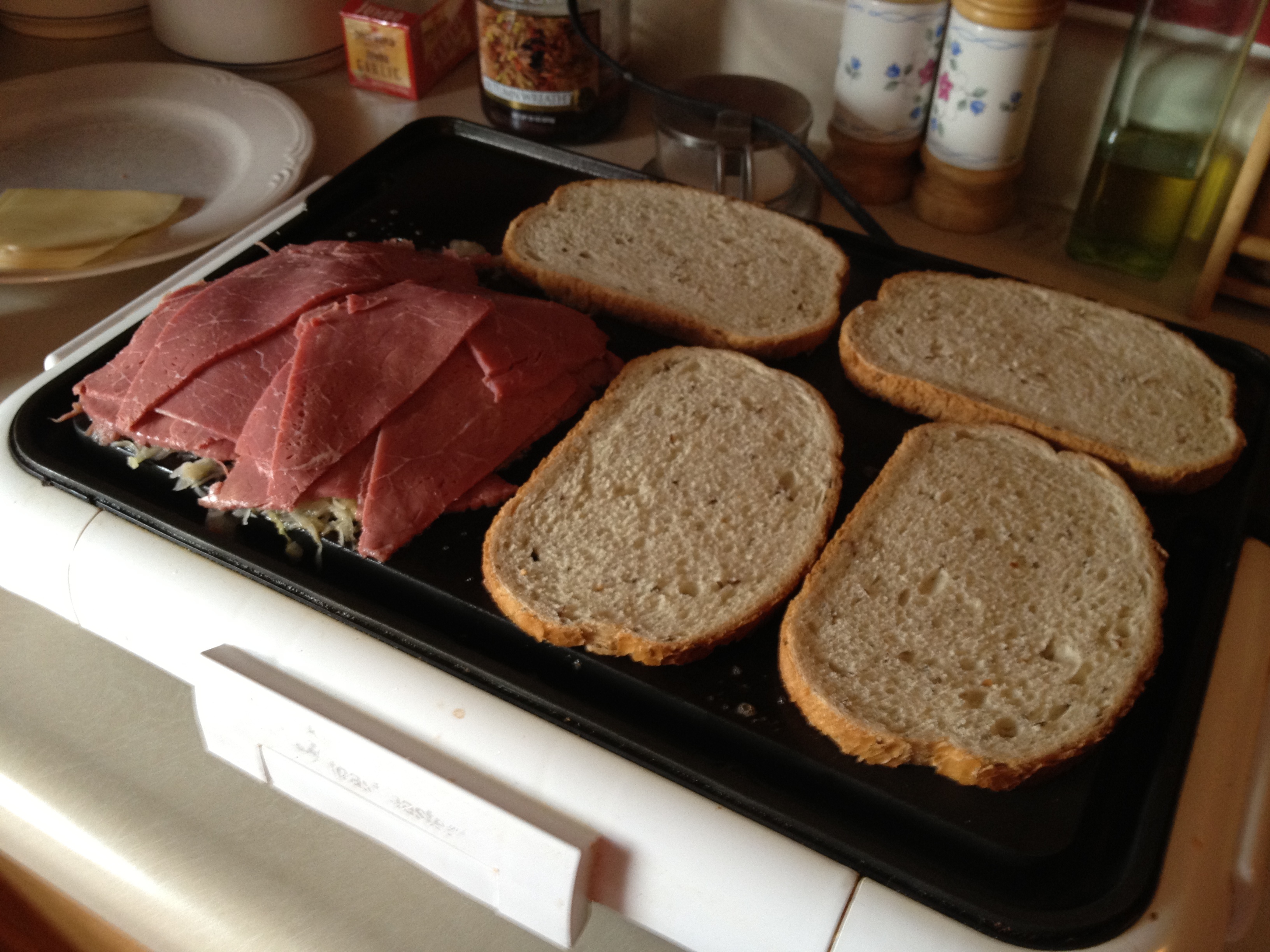 Coat the griddle with butter, then place the bread slices on there. Soak up the butter with the bread and start it toasting. Use rye bread. Marble rye is best, but don’t get the soft stuff; it’s for babies and it has extra sugar added to it.

Cook everything until the bottom of the bread is nice and toasty. Now, we flip everything over. 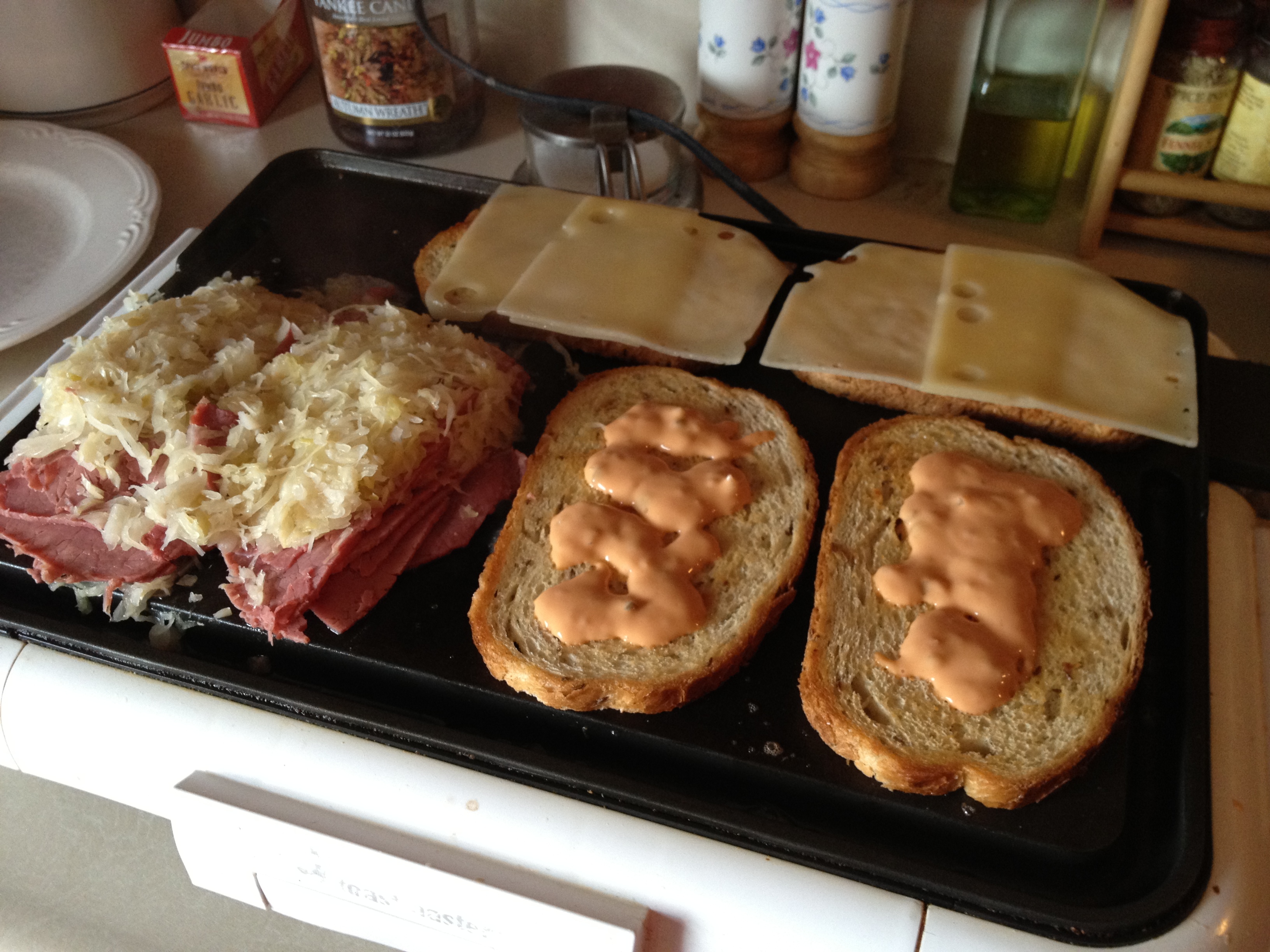 (Yes; we are going to toast both sides of the bread.)

So now we get the corned beef heated up an extra bit, and begin assembling the final product. Put a tablespoon or so of the thousand island dressing on one slice of the bread, and the Swiss cheese on the other slice.

Do this until the corned beef is heated through and the Swiss has started to melt. It should only take a couple of minutes. 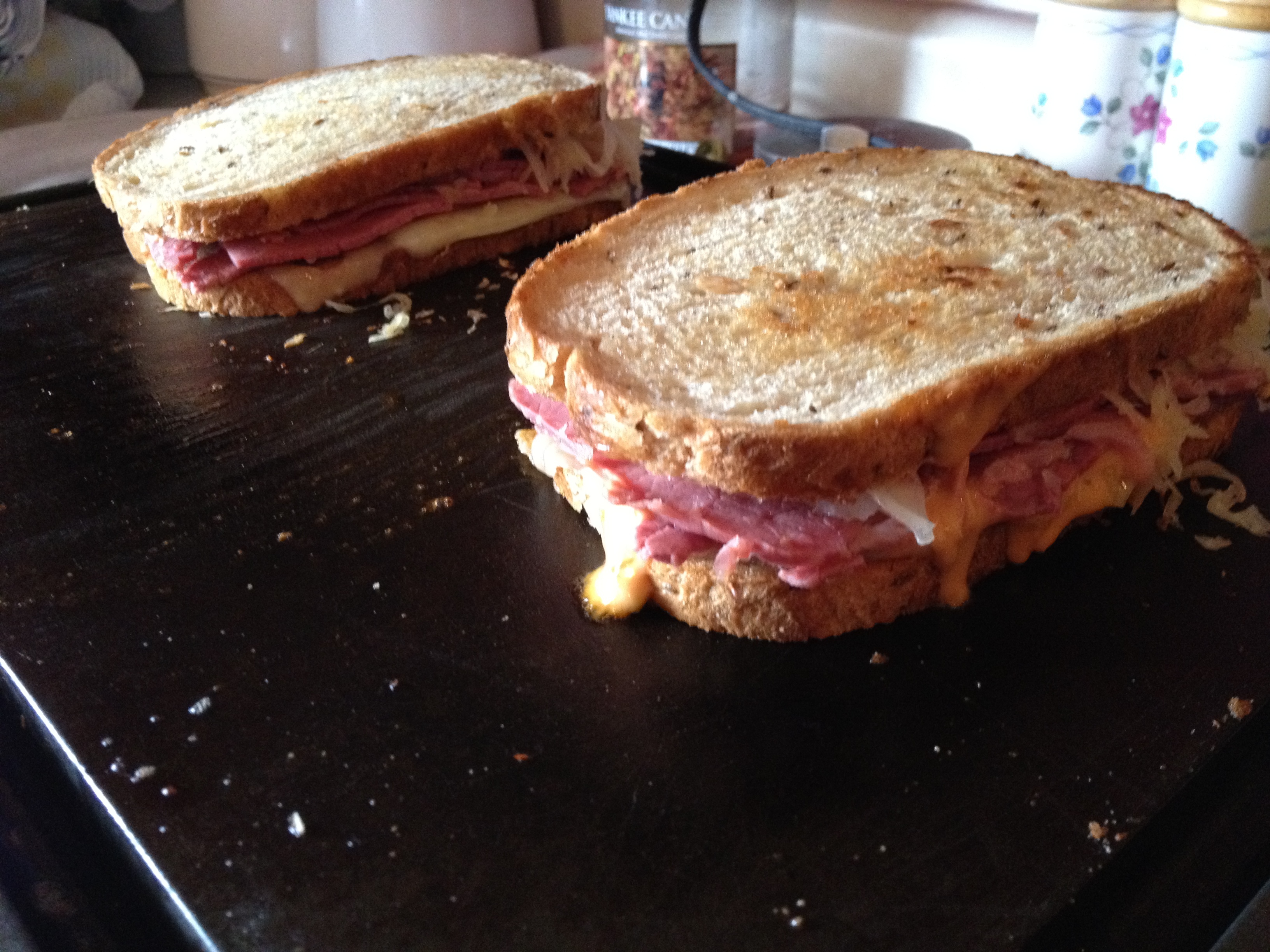 Quickly slap everything together for a final toasting and mingling. I like to put the kraut on top of the dressing slice and then cover with the beef and the cheese-melted slice.

Finish off the toasting of the sandwich to your personal specifications. 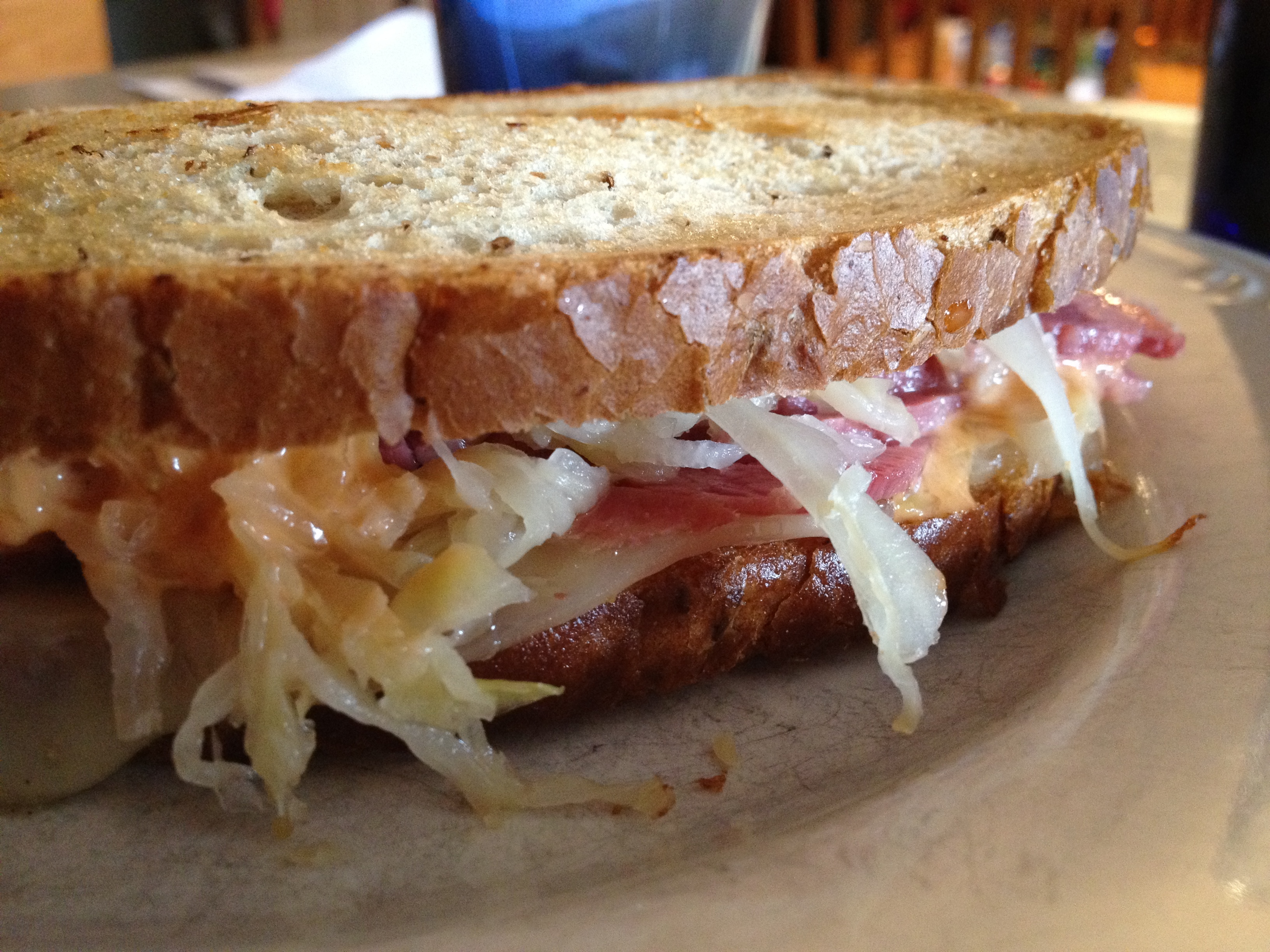 Serve and enjoy while it’s hot.

A good first start for talking about how to play or watch a game is to begin with speaking of how you win said game. The objective of the game of baseball is deceptively simple:

At the end of nine innings, the team that has scored more runs is the winner.

This is a simple concept for those who have followed baseball for years, but for someone new to the game, I have just introduced three new concepts in that one sentence. We’ll break things down even more over time, but to help you in your understanding of how a game is won, the best place to start is to also teach you how to read the line score.

An Example Line Score and How to Read It

The best example is a real one. Here’s the completed line score as seen on from a game between the St. Louis Cardinals and the Chicago Cubs, played in St. Louis: 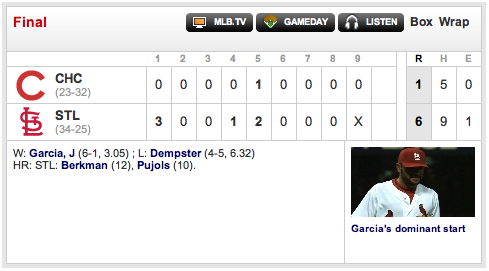 A few notes about how the line score is composed:

A game of baseball is broken into nine innings. Each inning has a top and a bottom, according to the place in the line score. I’ll put the line score back up so you can see that again:

In the top half of each inning, the visiting team plays offense and the home team plays defense. This continues until the defense records three outs, which is called retiring the side.

After the third out, the teams switch sides and play the bottom half of the inning, likewise until three outs are recorded. The home team plays offense in the bottom half of all innings to give them an advantage, especially in later innings.

As an example, look at the fifth inning in this line score.

Note that there’s no clock in baseball of any kind. A team is permitted to continue their half of a given inning until three of their players are put out. There’s no limit to the number of batters who come up in a half-inning, and no rule placing a maximum on the number of runs that can be scored.

Two things to note about innings and how they work:

What you’ve read here is the minimum necessary to understand how the game is scored and how your team wins the game. In future posts, I’ll cover more of the concepts listed here, such as how an out is made, how runs are scored, and how teams play offense and defense.

If you have any questions, please leave a comment. I’ll be happy to answer them for you.

For lots of Americans, the game of baseball is something that has deep cultural and family connections. For people like myself, my father, and my children, we have grown up listening to and watching baseball, both in person and through various media. Because of this, lots of Americans have an ingrained understanding of the game, the rules, and the various complexities behind it.

Baseball is, as a game, very interesting and rich in strategy and statistical depth. You can watch it and follow it on many different levels.

But what if you haven’t been steeped in this American tradition? What if you come from lands distant, or if you had never seen a baseball game? Are you going to a game for the first time? Are you interested in learning about another sport, one with a storied history and tradition? Are you marrying someone who is a baseball super-fan but you don’t know the first thing about a foul ball, a bunt, or an infield fly?

The following posts are for you. In them, I’ll try to explain the basics of baseball, then moving into more complex aspects of the game, using “real” language and images whenever possible to highlight specific things about the game. It can be difficult to get a handle on the game at first, as many of the rules and concepts are inter-related. It’s hard to know where to start.

If, as you read, and as I write these posts, you have questions or you feel confused, please feel free to add a comment and ask your question or suggest an additional post. I will do what I can to build on this guide based on the needs of its readers.

I’ve added a link in the navigation for this site for these posts; I’ll also try to update this lead post with a table of contents of sorts to try and keep things organized.

A couple of neat-o things I hit on today:

This covers Firefox gradients as well, but I wish these people would just get together and make one syntax for it in CSS. This is like late-90’s HTML all over again.

A Guide To Using Custom Scrollbars On Your Site

Also like older CSS (remember when you’d see custom scrollbar colors?), but much nicer-looking. Could be useful for web apps.

Best iPhone Apps is a reliable guide to the best, most useful, and most entertaining iPhone apps, concisely cataloged and described. This colorful catalog gives you the quick lowdown on each app, with brief tips on how to use it. This is the guide for discriminating downloaders.

Very rarely have I seen an idea for a book that will be as out-of-date as soon as it is published. I like O’Reilly, but this is a weird idea.

This must be for an audience that isn’t me.