The electrical work was finally completed on Saturday morning; I now have a second dedicated circuit as well as a cat6 dedicated run to the office. Once that stuff was in place, I was able to start moving things into the room proper and wiring everything up for the new environment. 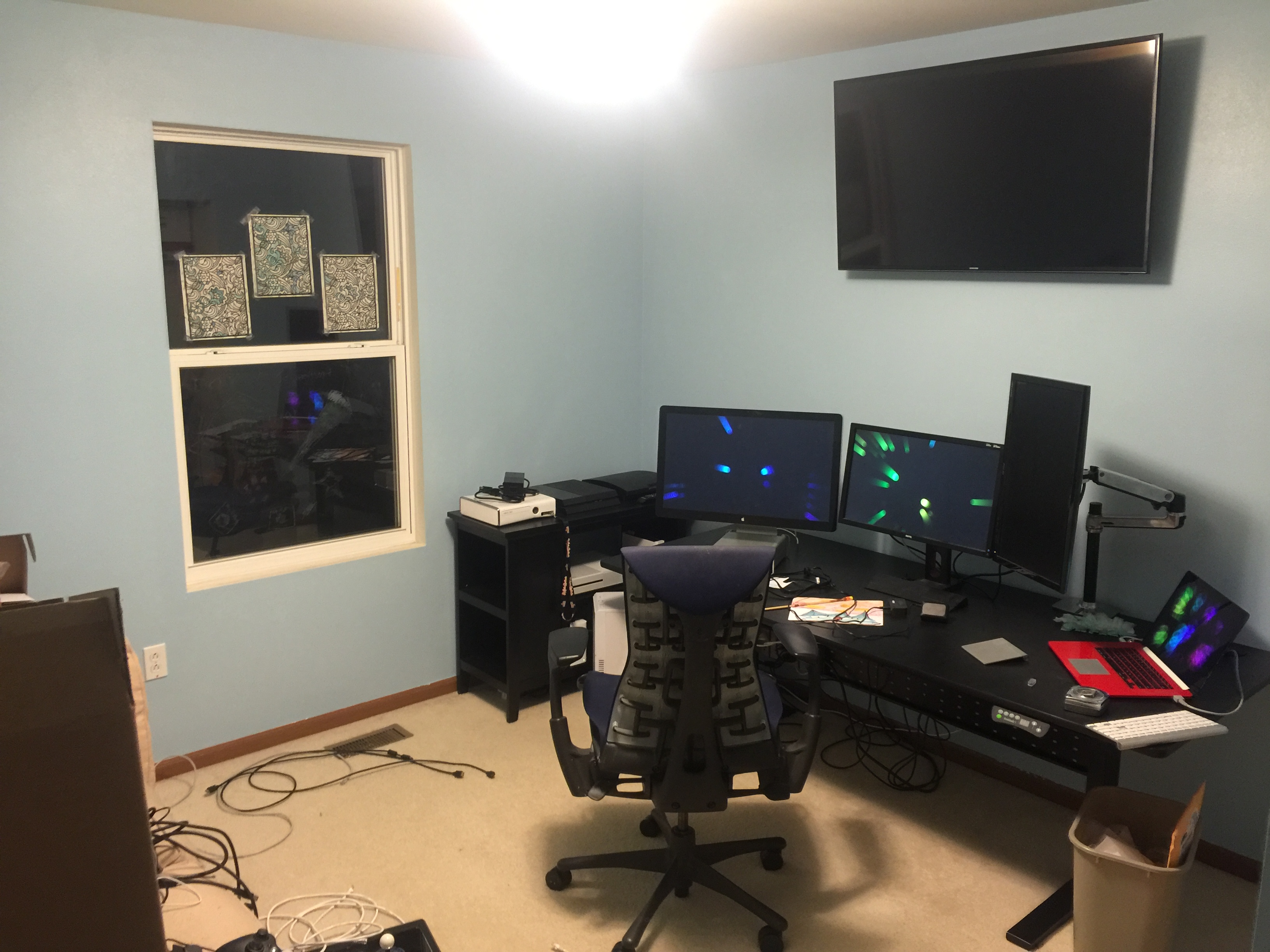 The electrical work was done by Jeff Foutch at Loco Electro, and for the most part it was a very pleasant experience and the work was well-done. The finishing in the room itself is great and the basement work is top-notch. He very clearly understood the correct way to route cat6 so it didn’t run into EFI problems with the power run, and secured the cables the correct way.

However, the process of getting it installed was needlessly destructive to the walls. They tore up a fairly large section of wall in the garage before finding it was in the wrong place and then having to move two studs over and do it again. And because my home has what was to them an unusually large gap between floors, they ended up having to cut into the ceiling as well. 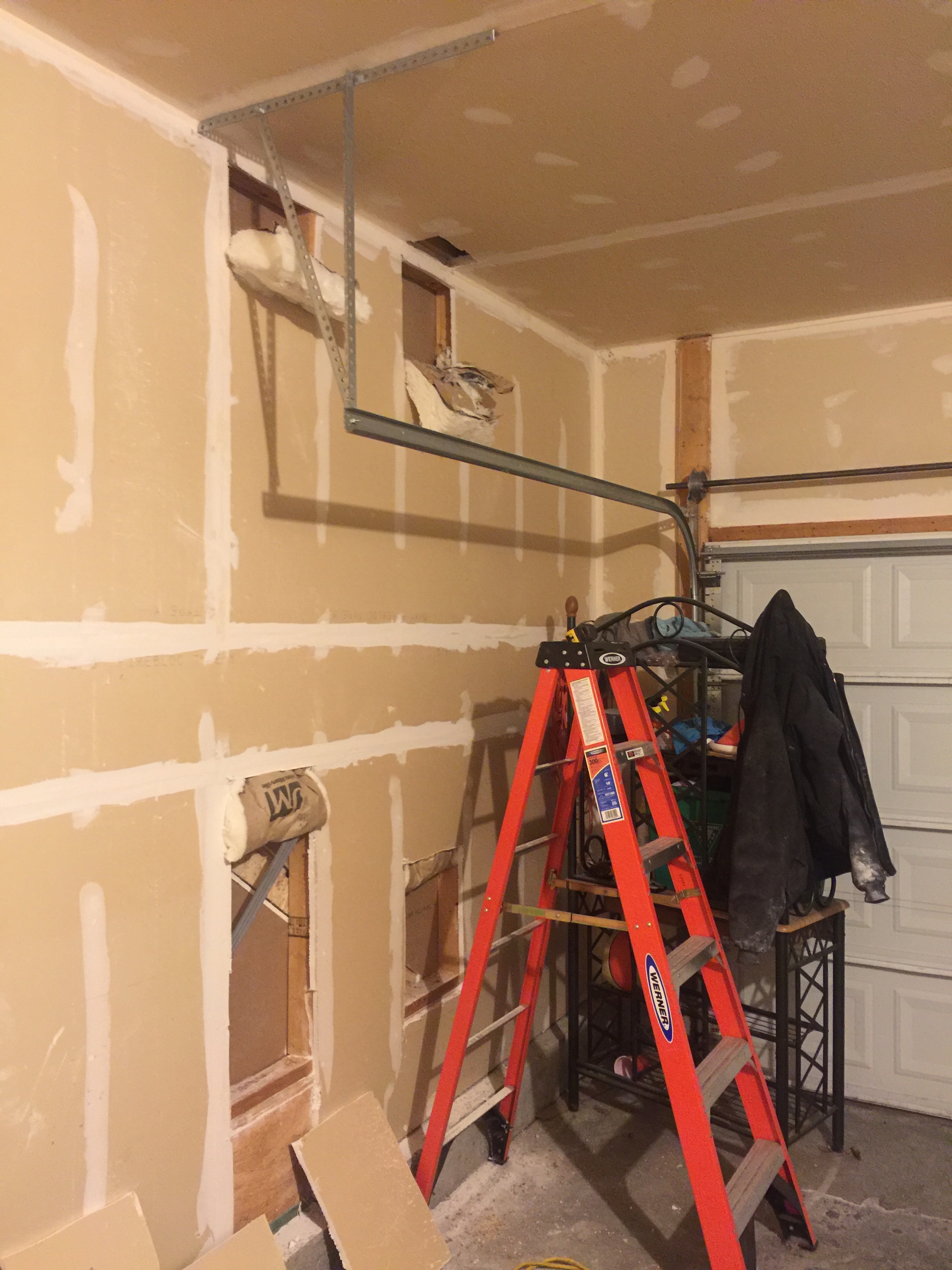 And because of that same gap, they had to take a larger-than-I-would-like chunk out of the boys’ room as well, which because of the proximity to the baseboard, is going to be more problematic to repair than it should have been: 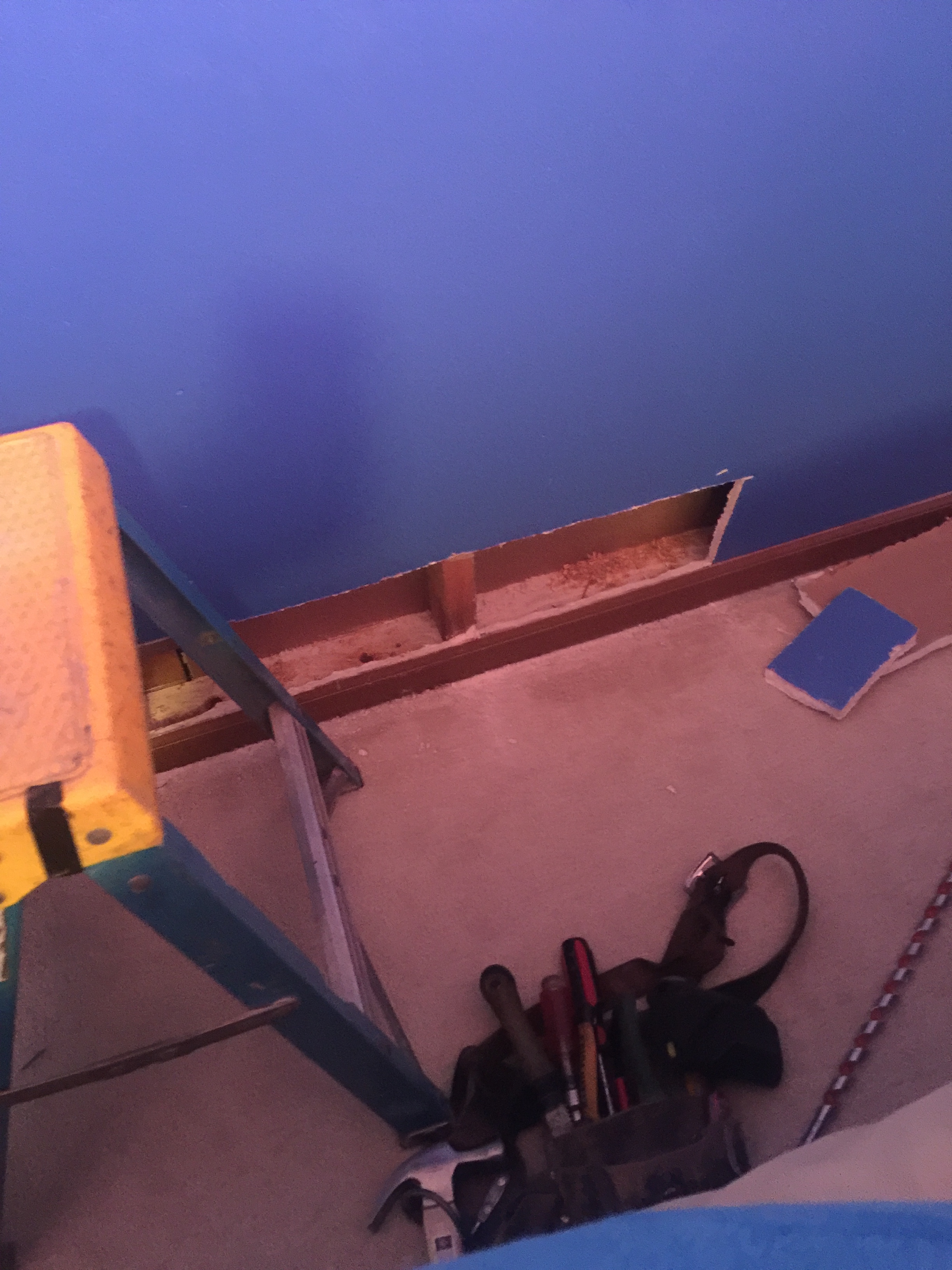 My final opinion on his work is that he is an amazing electrician and the right one for the job (he even came in under bid) but I’m going to have to pay out more than I thought I would to fix the cutting into my home, and I can’t even get started with any of that until the electrical is inspected later this week. I’m disappointed in that aspect of the project. I blame part of it on the ridiculous construction of my home, which is probably fodder for a whole other post.

I would hire this out but I’m not even sure how much that would cost. (Read that as I’m dreading how much it’s going to cost.)

After another few hours of finding the right cables and trying to wire things up proper, I at least have the room in a condition where I can work, but it’s going to be another half-week at least before I can stream from it just because I need to wait for some different cable lengths.

The shelf of consoles is put together, but I haven’t hooked most of them up to power yet, and I need to get some more ethernet cables to hook them up without insane amounts of coiled cable everywhere. 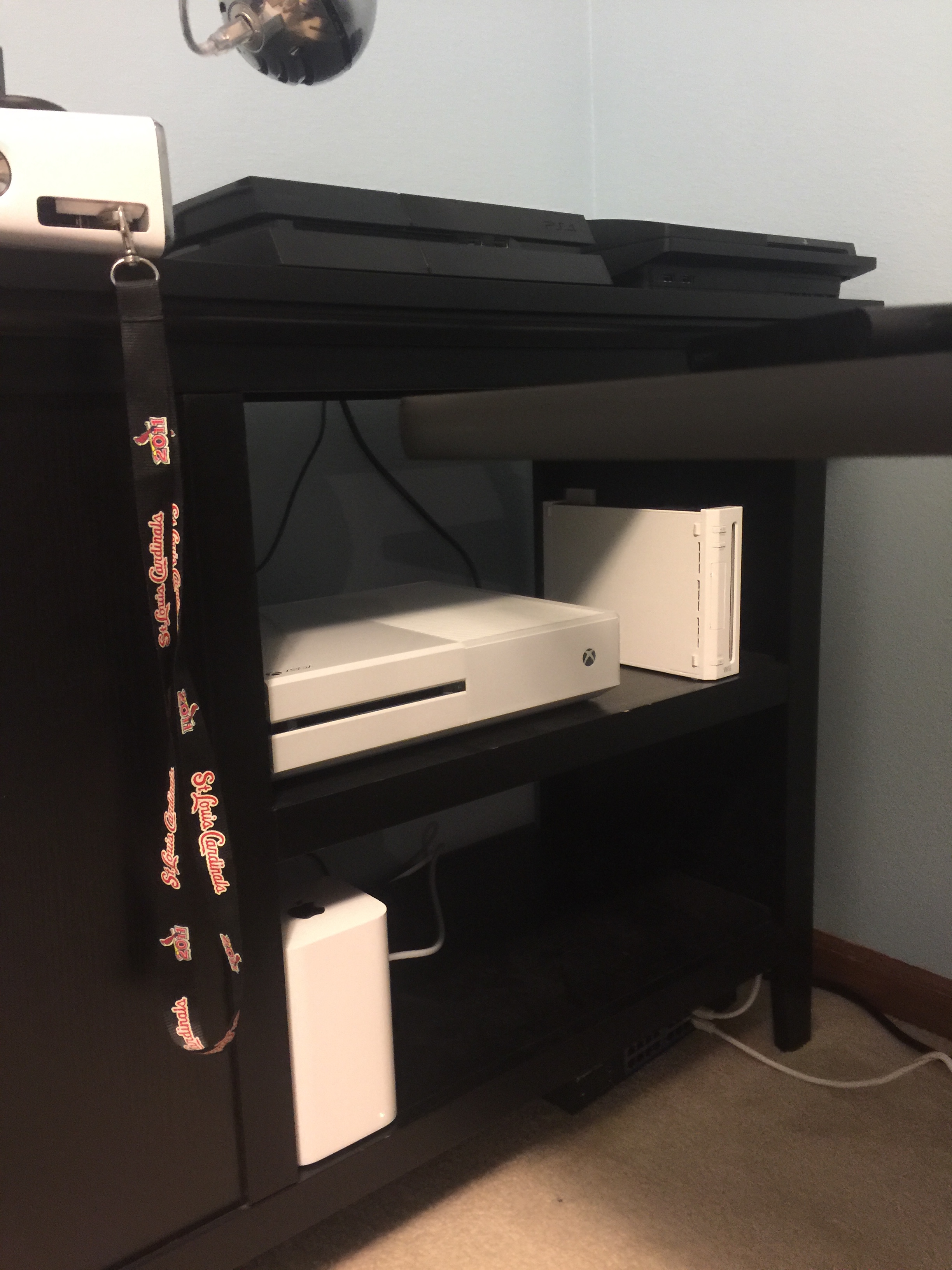 You can see that I had to finally upgrade to a 16-port switch there under the shelf. Really, after a couple of days of trying to get everything wired together, it’s close enough that I can see light at the end of this tunnel. 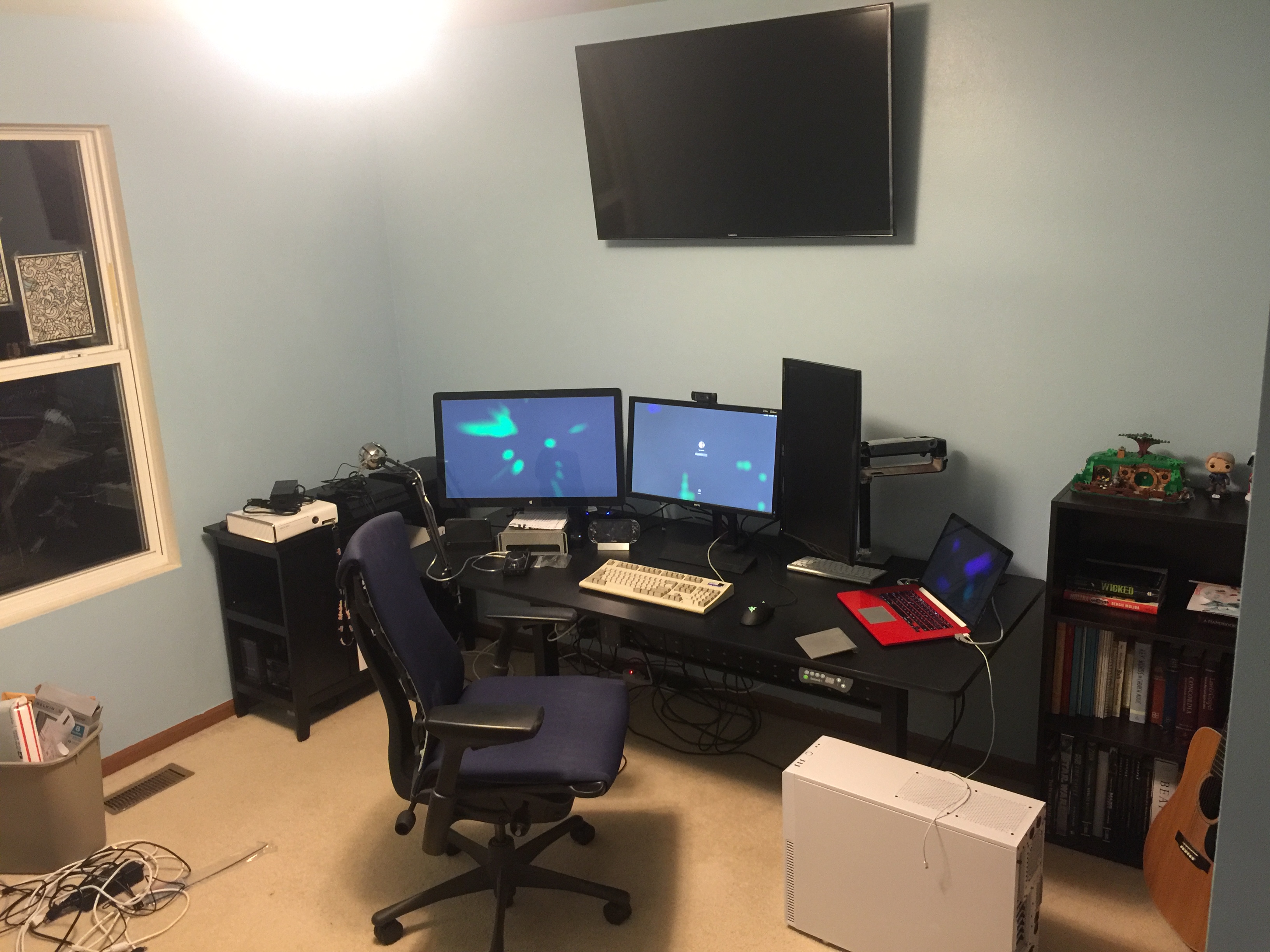 (The PC is the big loser in the setup right now and the main reason I can’t stream yet.)

I even found a place for my 3DS and Vita charging cradles.

Now, I just need a longer power cable for the TV, one for the PC tower, and some various ethernet cables and USB runs. When I have everything together, I’ll try to remember to post about the connections and the various bits of hardware that come together to create my office environment.

I call this the “beta release” of the office because I can technically work out of it now but it’s not what I would call “complete.” Hoping for RC1 this weekend. :)

As I write this, there are sounds of drilling and cutting going on in my home as the electricians I hired to finish the work on my office are doing their thing and running cable that I’m not equipped to handle.

Other than some wall patching I’ll have to do after they are gone, this is basically the last step in getting to Home Office Release 3.0.

This past week, Amanda and I just went ahead and painted the office space. First thing to do was shove everything that was in the office to one place so we didn’t get paint on it:

Of course, we started with taping, which I did in the course of a workday, going upstairs with my standing breaks to tape a bit at a time. 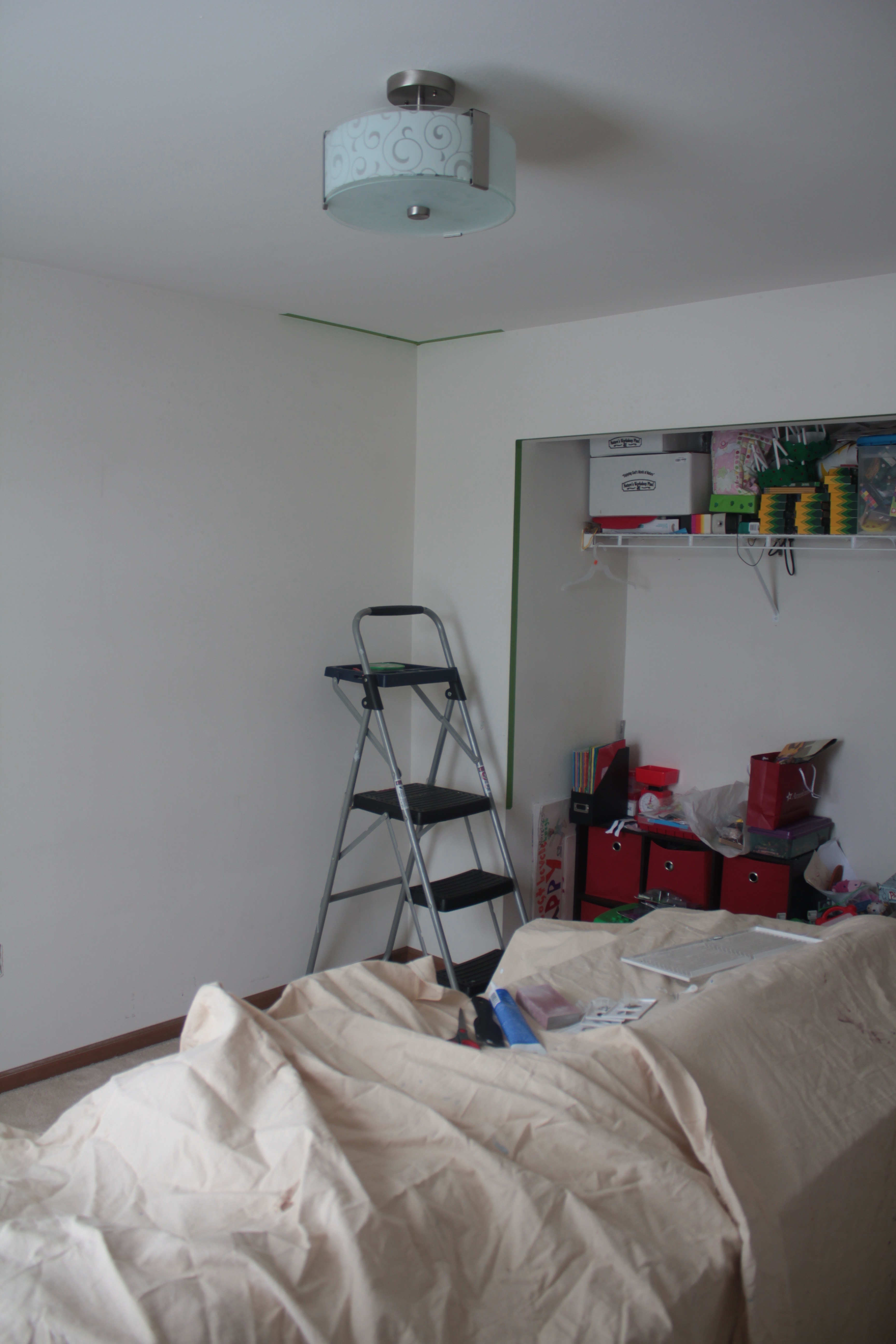 We didn’t really waste much time and instead decided to just get on with it. I hated the area around the doorframe and when I started Amanda threatened to just do the whole thing herself because I’m insufferable when I have trouble doing something like this. 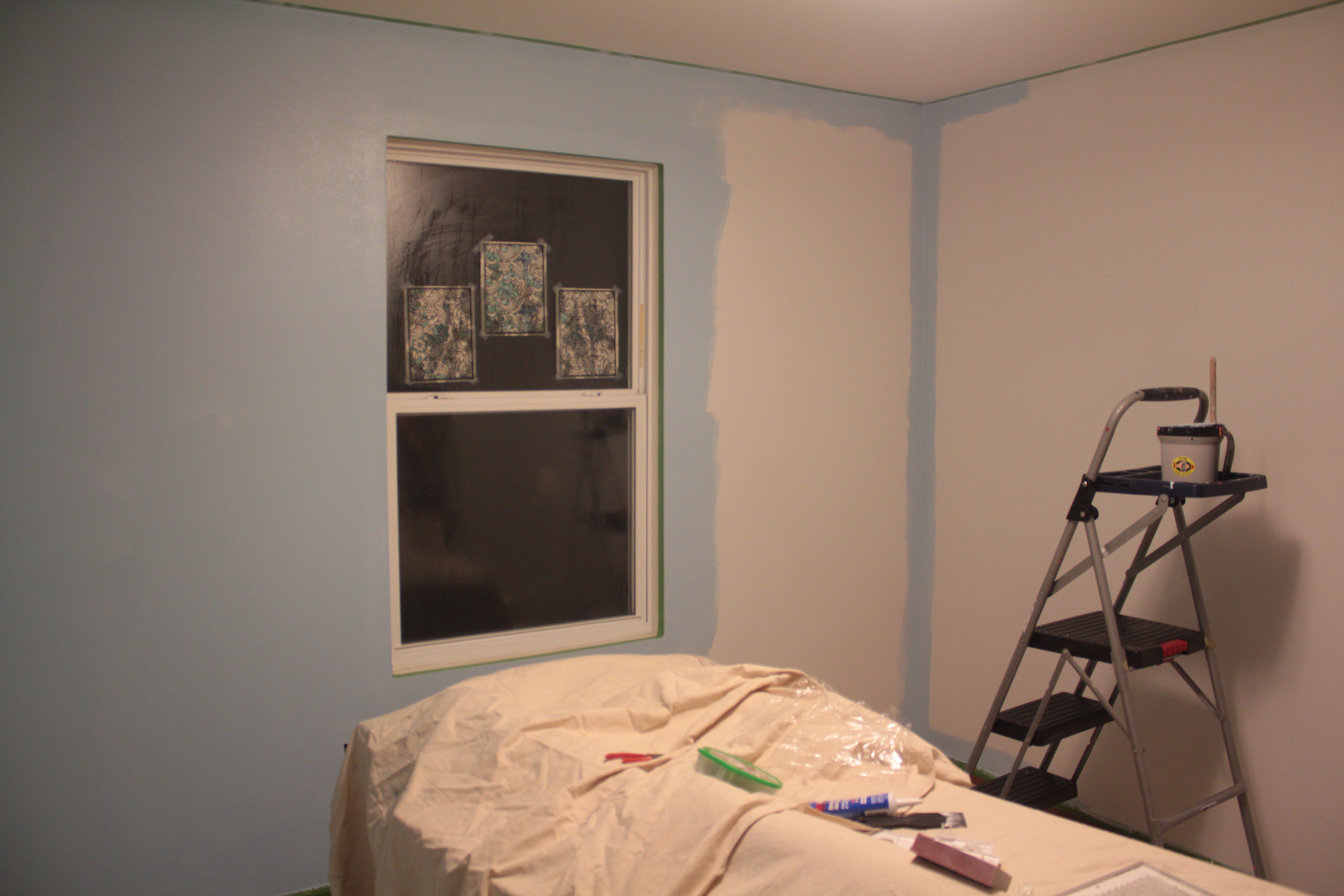 We did a coat of primer that was just sucked up by the walls (they had not been painted yet and were still just spray texture), and then a single coat of the color, which looks very nice if you ask me. 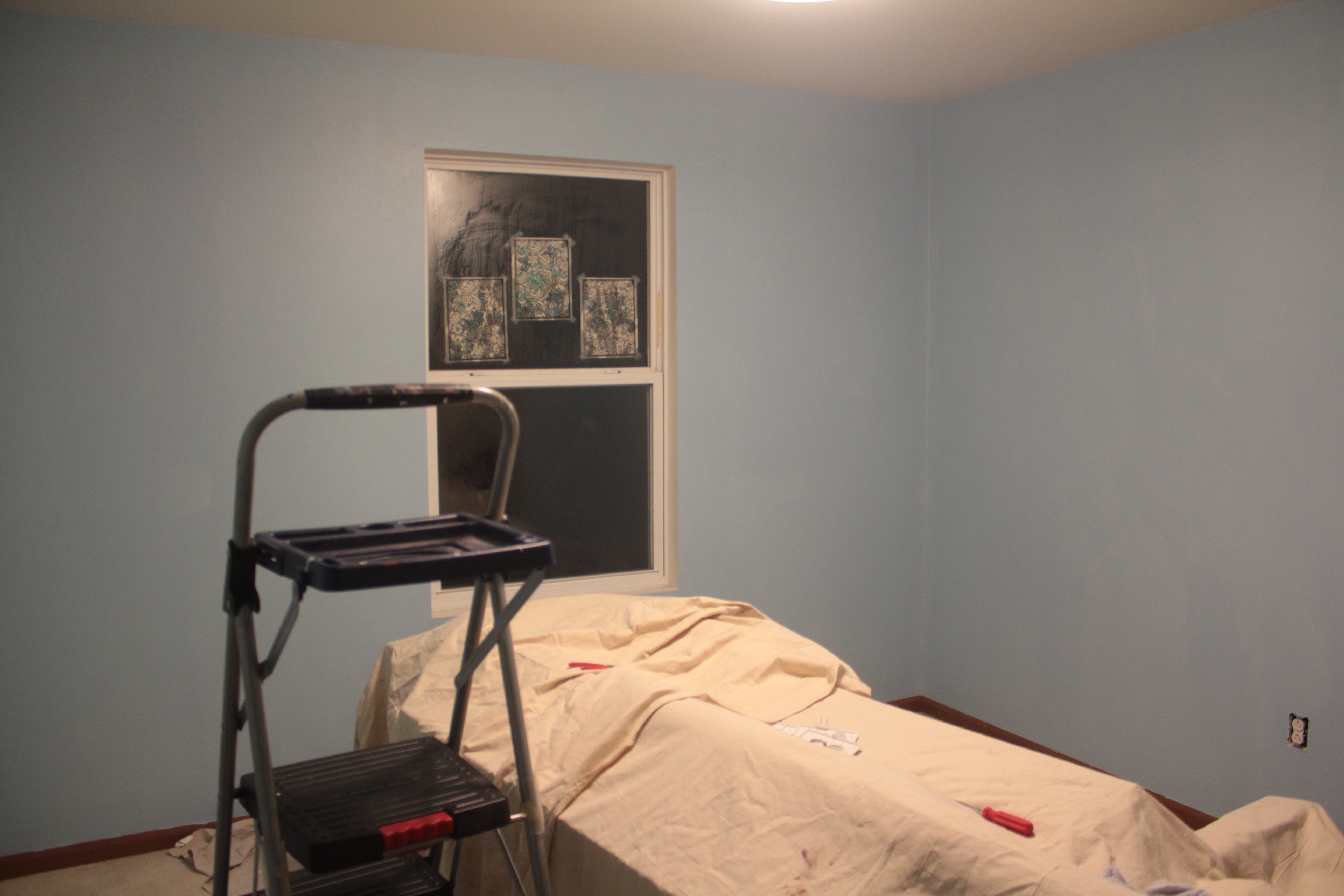 By the end of the night, we had a fully painted room, and in the morning sunlight Amanda did all the touch-ups while I was working.

I worked at the old folding table for about one afternoon, but at that point I got antsy about bringing stuff up to the room and got my desk up there, where it sits now waiting for the electricians to complete their work. 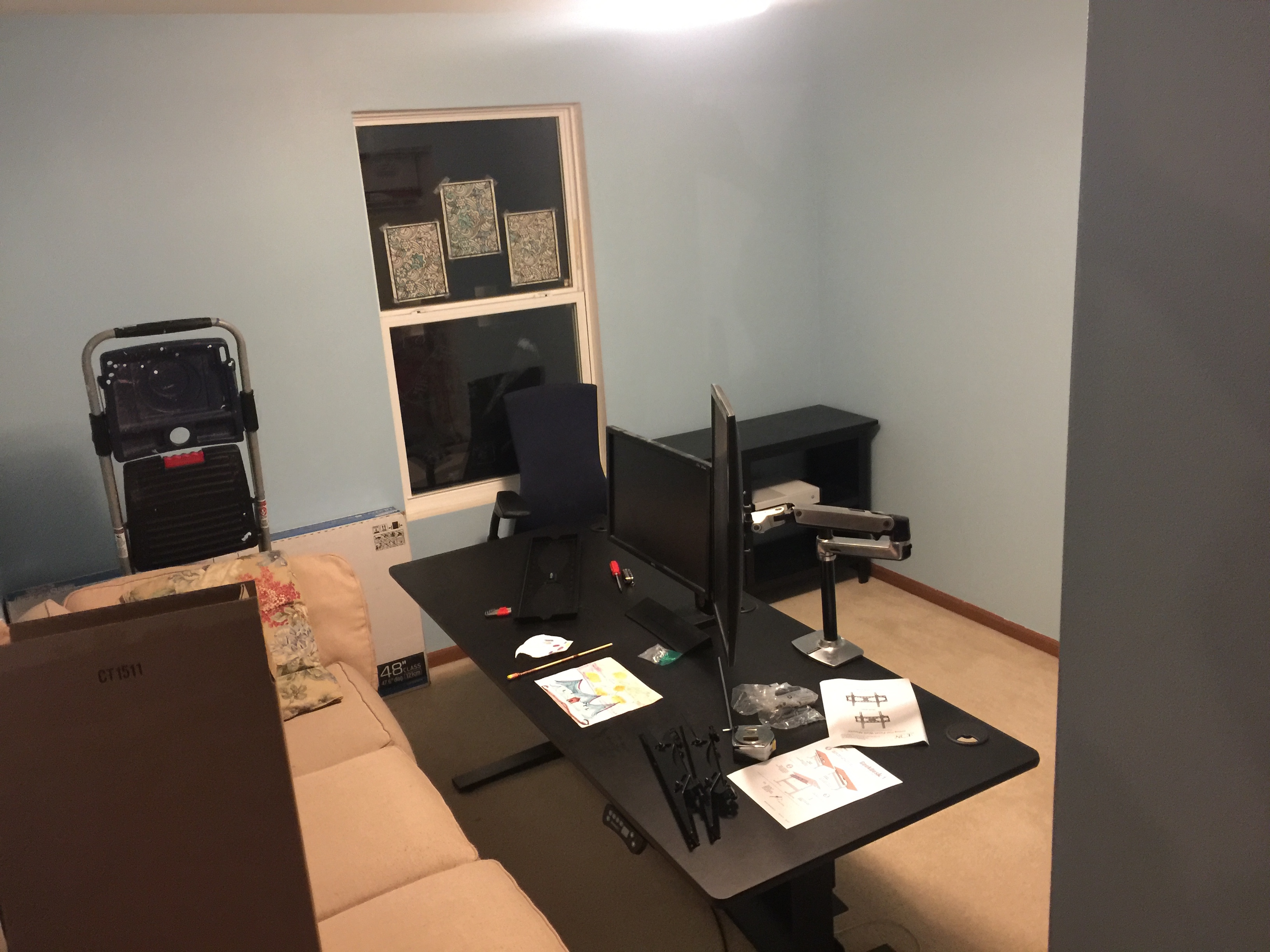 Hopefully, there’s not too much additional work that needs to be completed after they are done this morning. I need to mount a screen on the wall, move the desk to the correct place, and then wire everything up. It looks like I’ll need to do some wall patching in the boys’ room (where the wall is they ran the electrical up) and there are some huge drywall holes in the garage right now (but those can wait).

For the last two-and-a-half years, my office has been a good friend and a nice space in which to get things done. For a while, I’ve had some bookshelves behind the desk, but last week Amanda and I moved those around to fit another shelf and instead put the couch behind my desk, which worked OK: 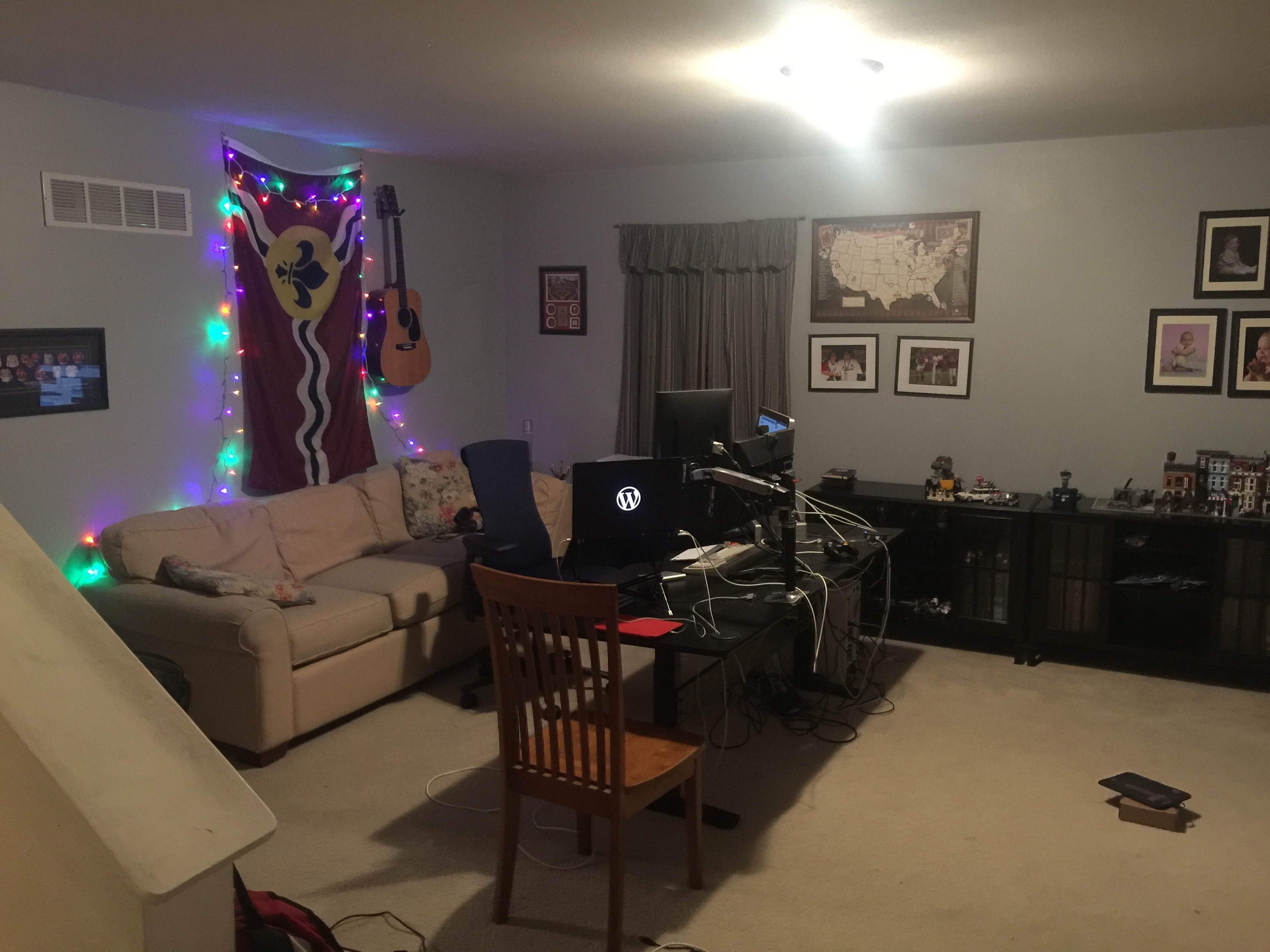 But after putting it there, I sat down on the couch and Amanda sat across the room, and we looked at the desk. We realized that it was now the most out-of-place thing in that room.

So the question became where to move the desk and my office space. We have a fourth bedroom that is not normally in use except as a library for all of our books. (We have many.) There was also a bed in that room as it is normally where my parents stay when they are visiting—or any other guest with us.

And the furniture moving began.

And then the furniture purchasing.

Less than a week later, my coworkers have been very generous and patient with me as I have been without the comforts of my desk and standard work environment, because the room I normally work in looks like this right now: 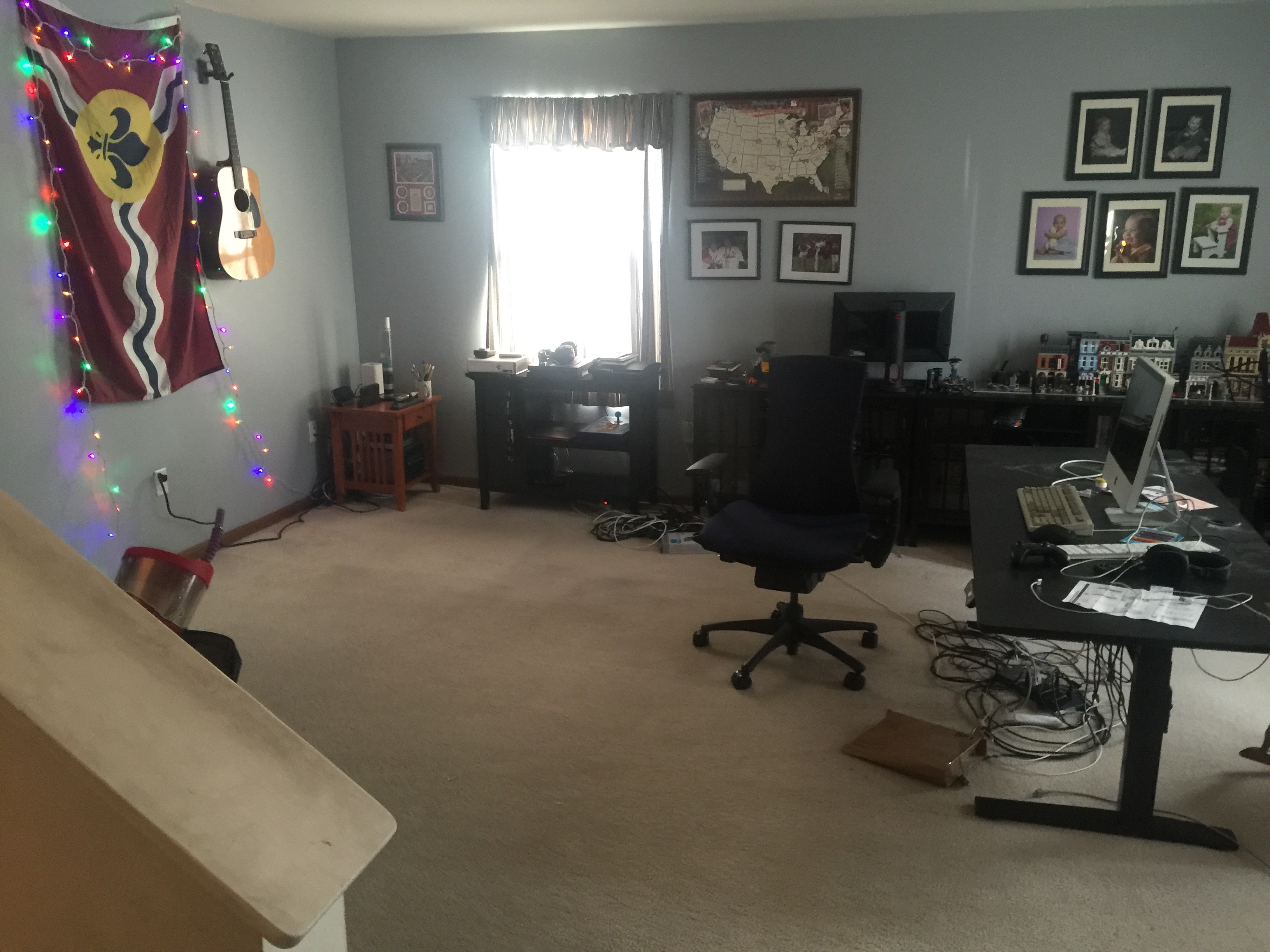 (Actually, there is even less in there now. The wall hangings to the left are down and there is new furniture in the room. It is no longer my office.)

The room that will become my new office is in this state right now: 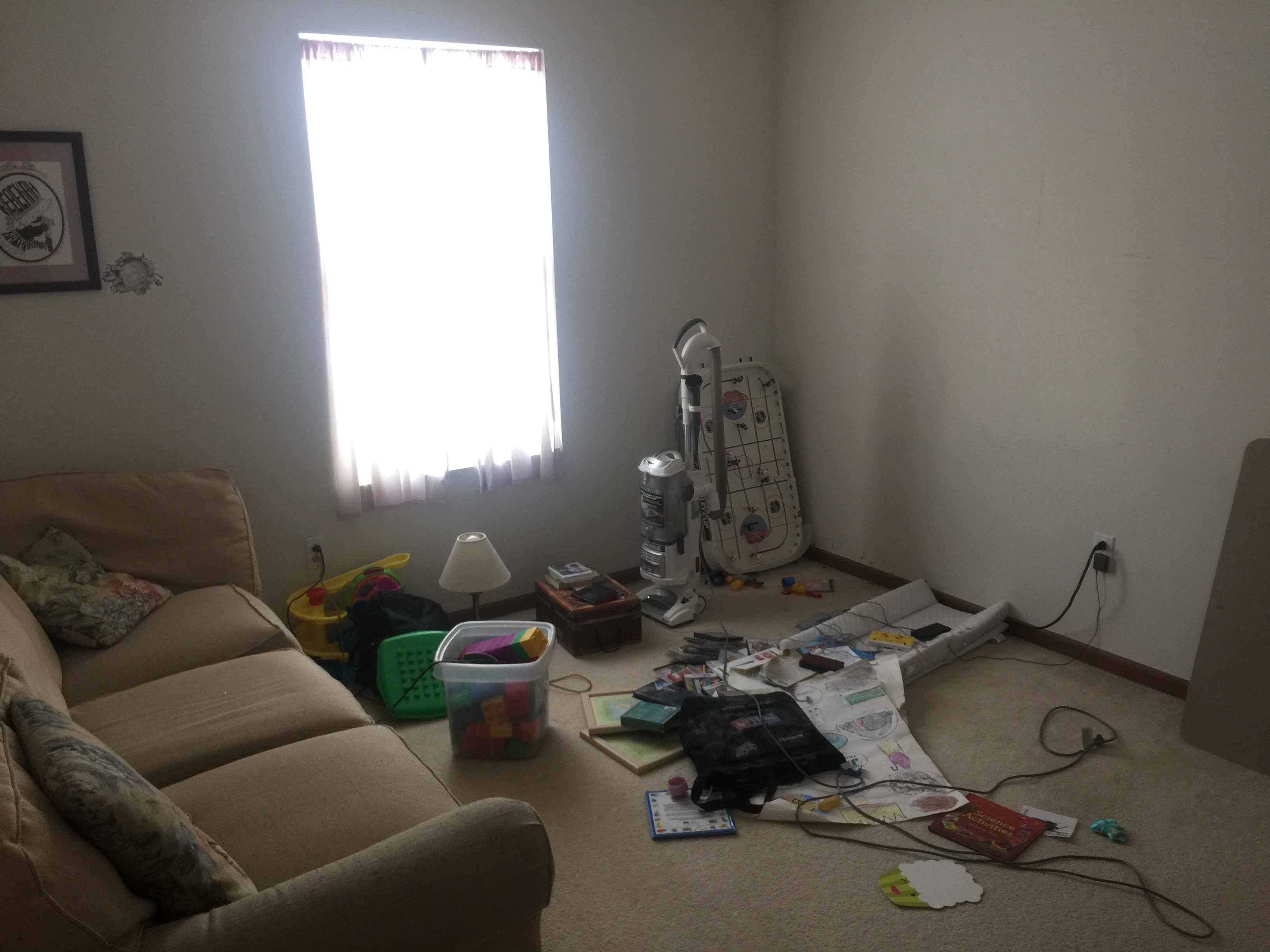 I haven’t moved my desk in yet, because there is still a whole lot that needs doing in that room before I can do that. The list, in order of what gets done when:

Sadly, the electrical work is probably not going to happen for a couple of weeks, so I’m nomadic within my own home for a while. At the very least, I have created a cozy nook in my bedroom using one of the chairs we moved out of the lower level of the house. 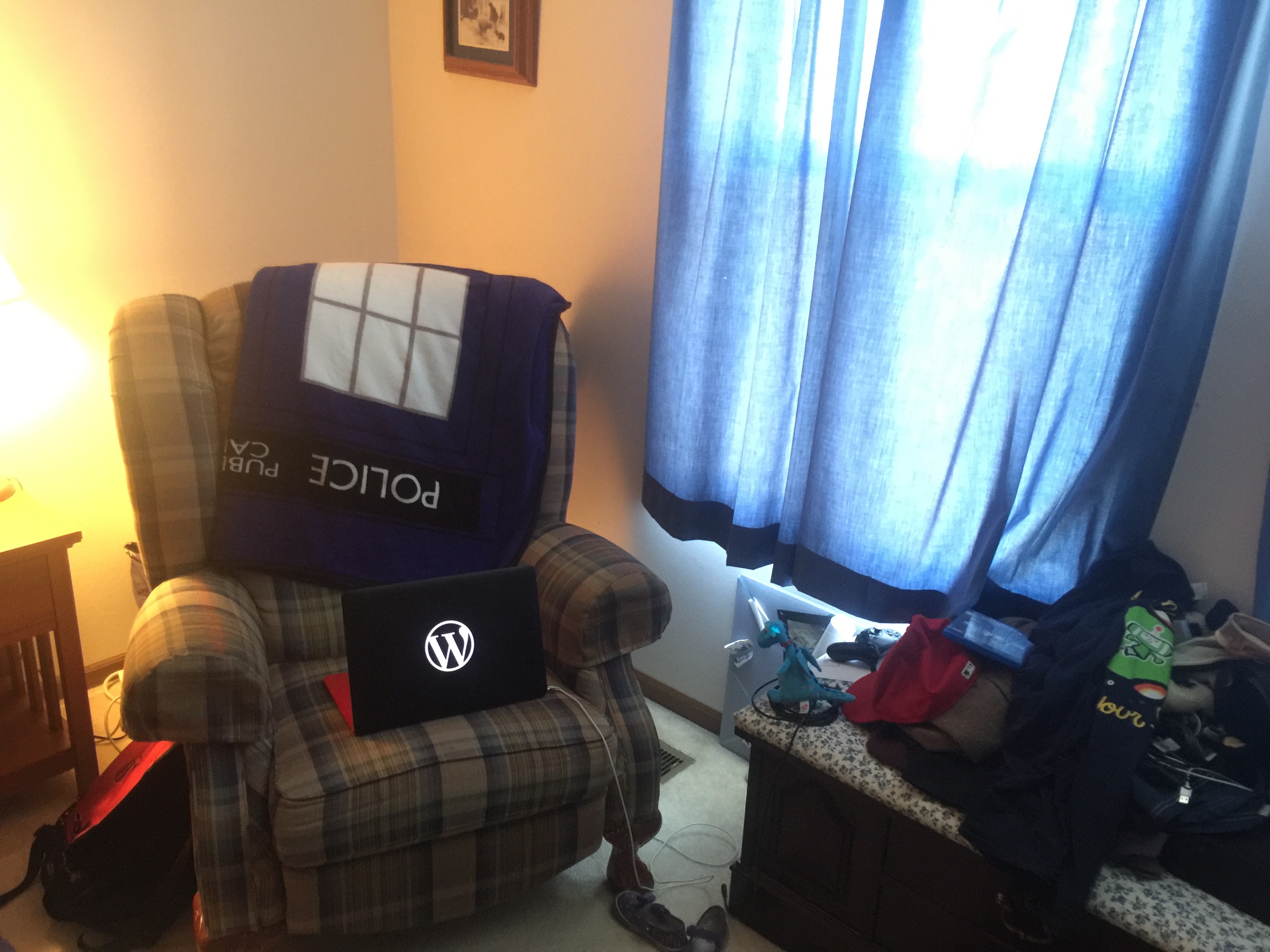 I’ll be working out of this space for the near future as I wait for the work to be done on my new office. I’m really stoked for the new space, so I’m happy to put up with some inconvenience to get there.

And—oh yeah—we managed to throw out a ton of stuff, which is pretty cathartic, even if it is very sad at the same time because it feels like we are saying good-bye to the “parents of tiny humans” phase of our lives as our youngest will be turning four soon. 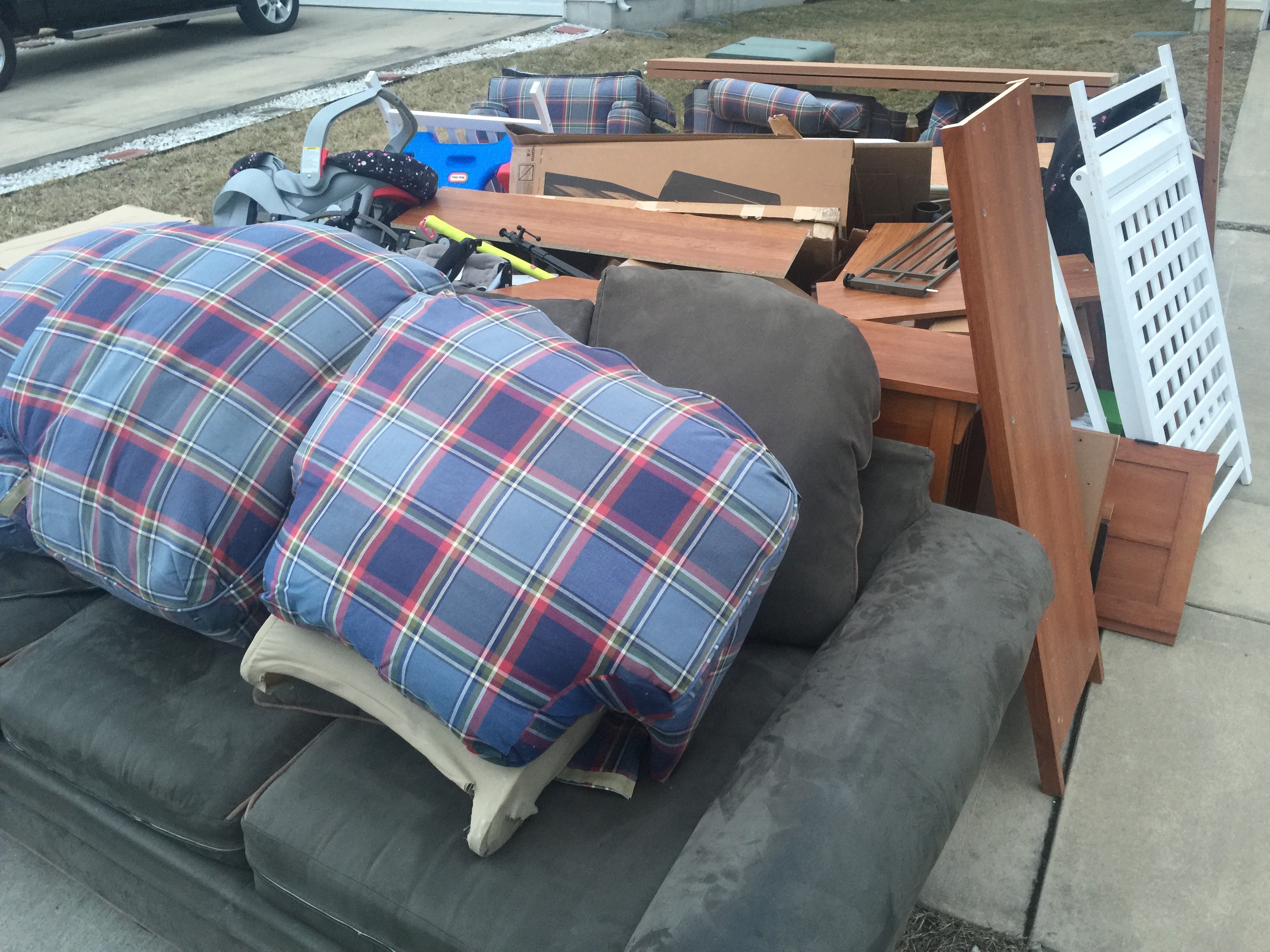 I got a bit tired of my workspace a few weeks ago and decided to do something about it. I never really liked having my back to the door (having read Dune, of course), and didn’t think the space was very helpful though it was nice and bright. 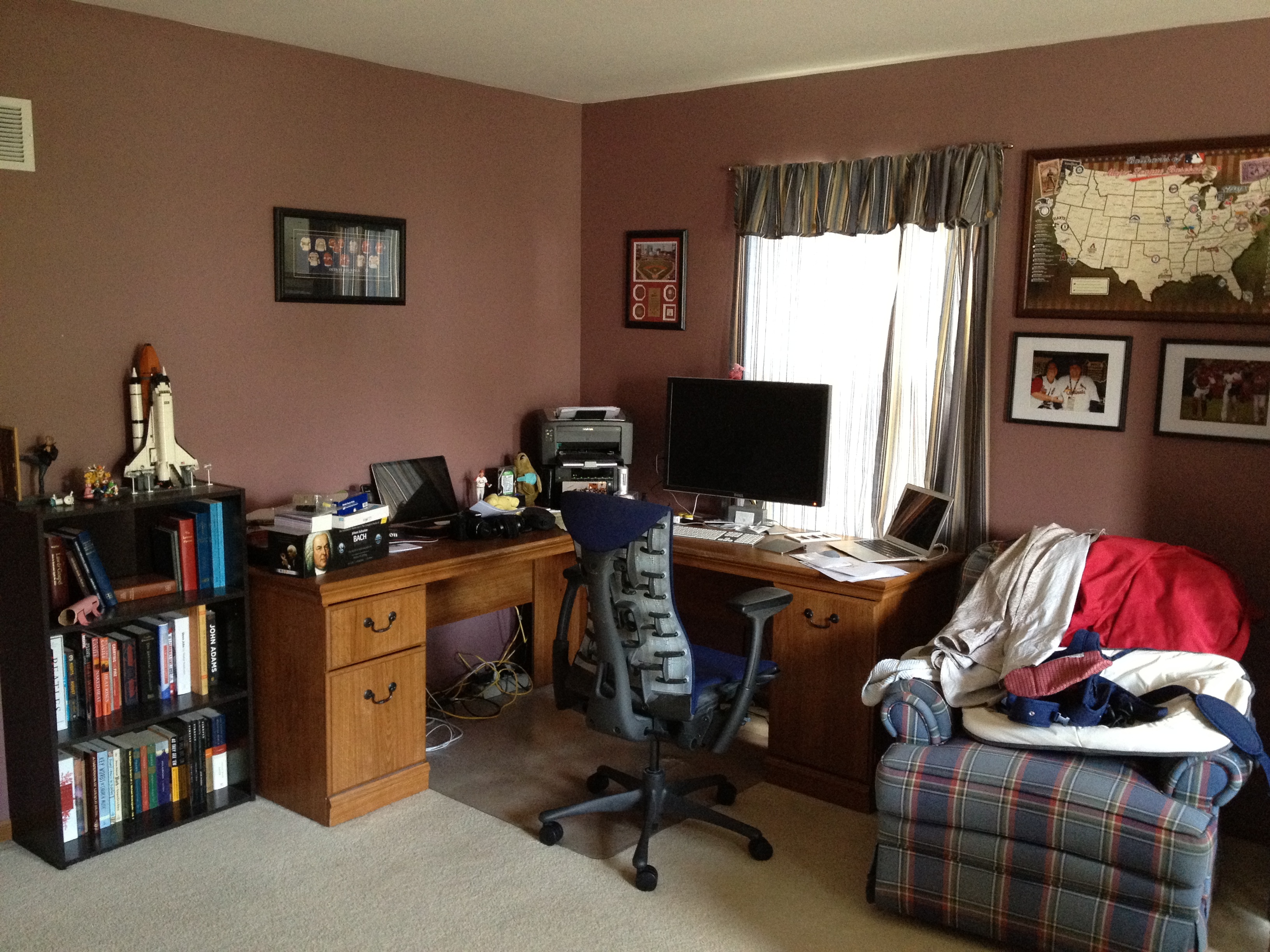 The biggest change I like is that I got rid of the chair mat I was using that kept shattering every six months and bought a small area rug that’s pinned under the desk and protects the carpet.

I have a couple of Lack shelves for the wall that is now behind my desk but I’m dragging my feet on installing them. I think maybe that’s Office 2.5.