I don’t have a big picture for this update, because there’s not much that’s changed in the room visually at this point—but that doesn’t mean nothing got done.

Today’s work is almost solely the result of an awful lot of hard work by my wife. She did a bunch of touch-ups this morning while I was getting some other things squared away, and this evening she went through the room and used up the remainder of the two gallons of paint we bought to do an entire second coat on the room all by herself.

As if that wasn’t enough, she also steam cleaned the perimeter of the room (the chair and piano are still in the center of the room) after vacuuming up the last of the drywall dust. It was an insane amount of work, but my wife is a superwoman and I clearly don’t deserve her. And all this with her starting school with my children next week as well as getting Caleb ready for his first day on Friday.

I bought her a pizza and some of one of her favorite beers as a thank you this evening, but I’m certain that wasn’t enough. I should try to be more creative.

I did put the frame together for my new desk: 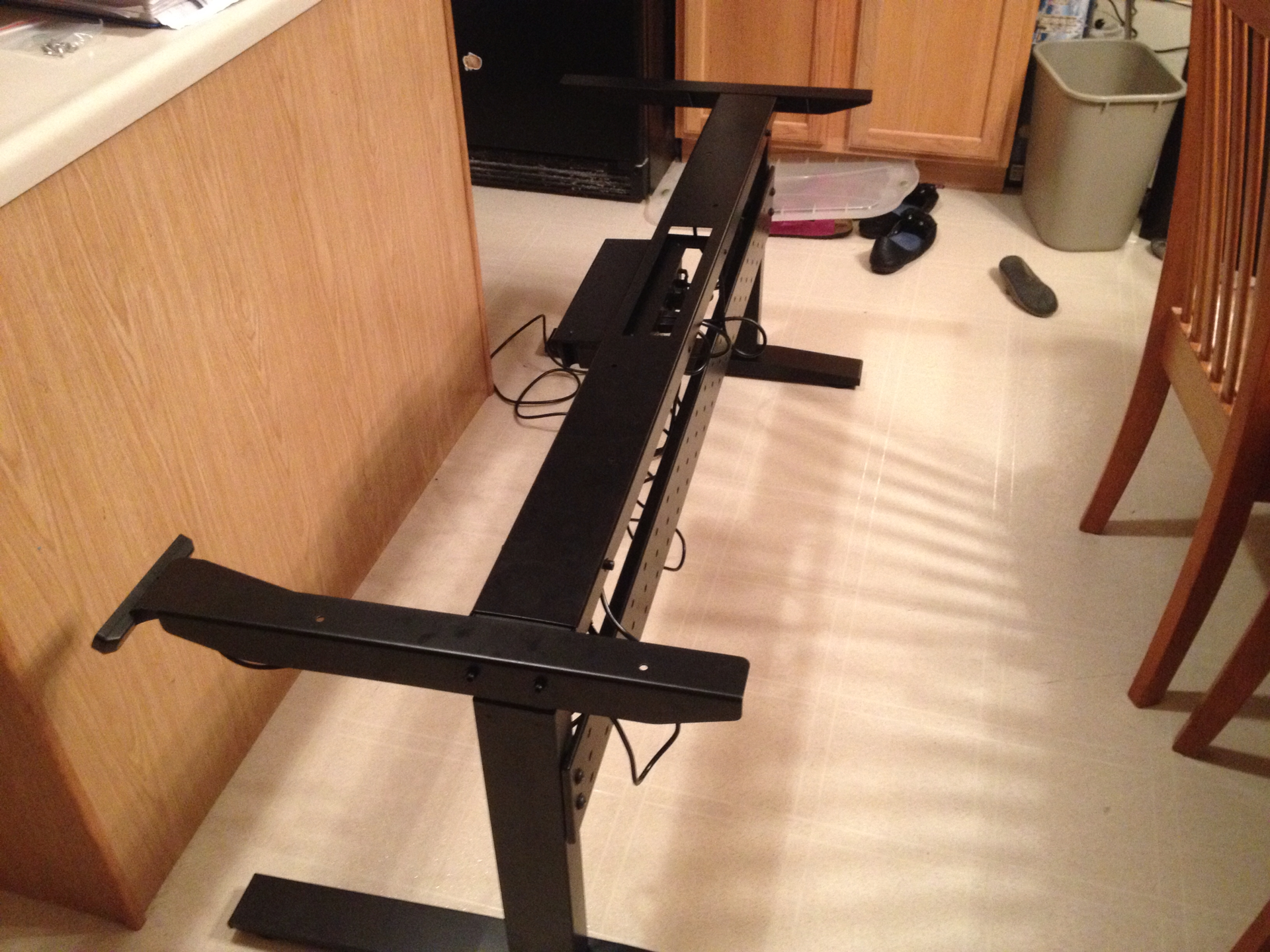 The top for the desk is still propped up in the garage, but I plan on installing it tomorrow. I’ve tested the desk frame and everything is working great. Yes; it’s in my kitchen right now.

The reason she ended up doing that work by herself was that I summoned my main man Ken over today and we got to work on the living room project. There are a couple of bits of furniture I want to move from the living room out to the office, so I wanted to get that project rolling. I had planned on helping Amanda with the painting after I was done with it, but I’m upstairs now and it’s after 1 a.m. and it’s still not done.

Here’s the setup I had before today’s work: 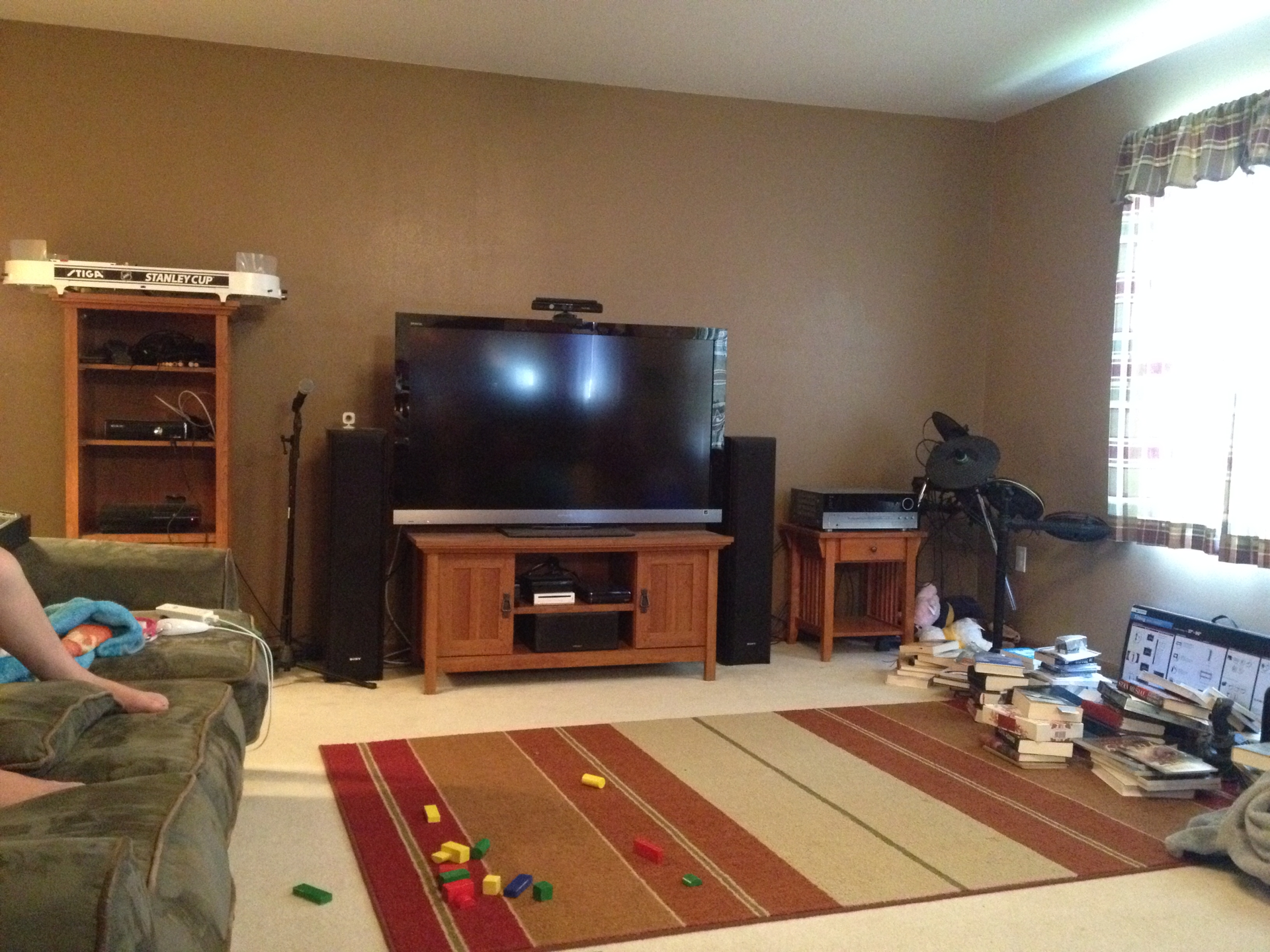 It’s served me well to date, but there was a lot about it I didn’t like. The audio pier—of which I had removed the door long ago for cooling reasons—has  been an awkward piece of furniture, and the receiver being located off-center made wiring the room difficult. (I have speaker connections I ran just after the house was built that go to the surrounds on either side of the entrance area of the room.

The only solution for these problems that made sense was to mount the TV on the wall. As I tweeted previously, this was a decision that was probably a long time coming, and Matt asked me about that:

@ryanmarkel why resist before, and why do it now?

I promised there was a blog post coming about it, and so here’s the word. I have resisted mounting the screen for the following reasons:

Here’s what swung me around to wanting to put the screen on the wall:

After an evening’s worth of work, here’s where we are with that room: 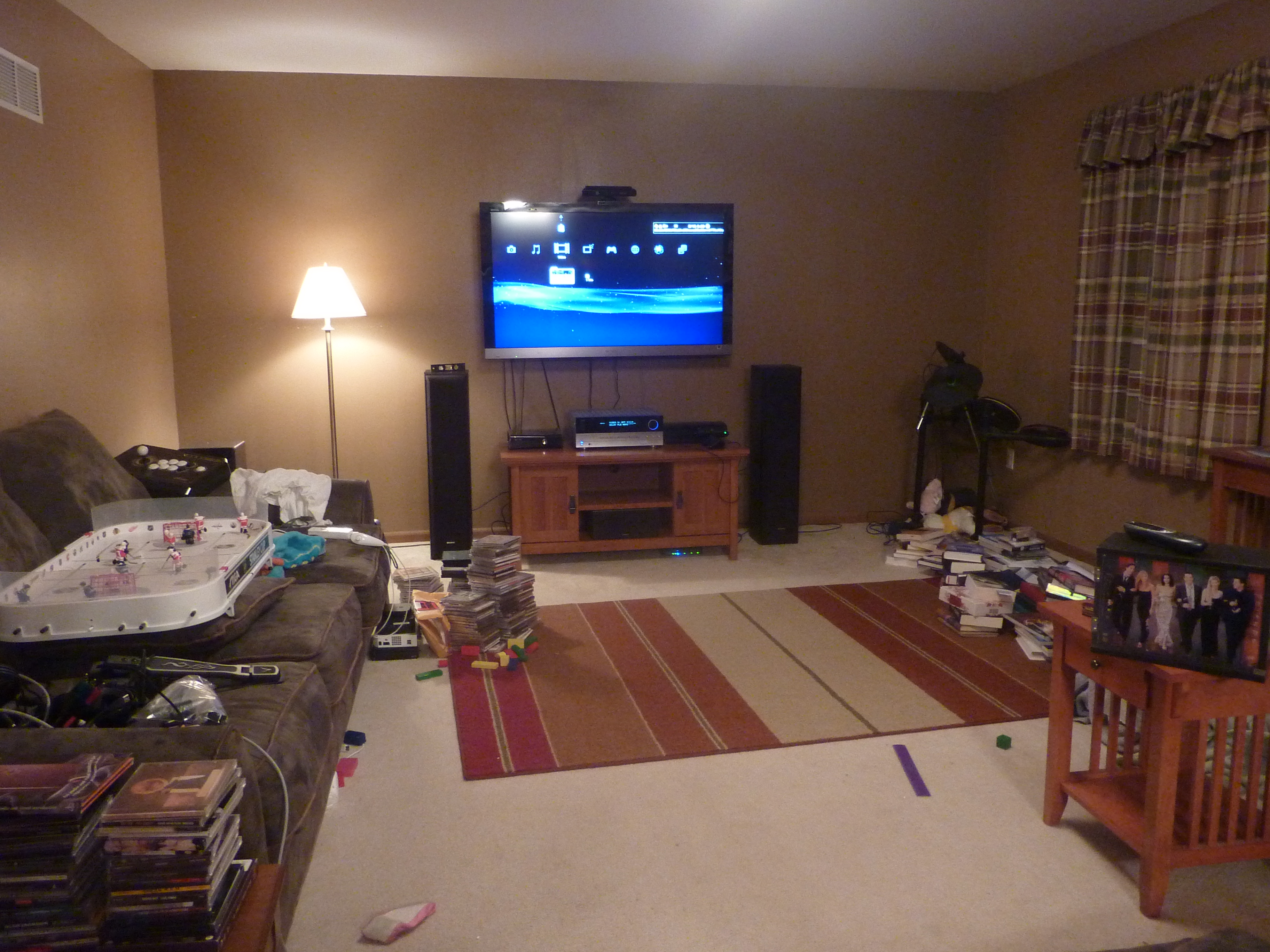 A few notes about this image:

@ryanmarkel If you don't have a mount yet, get one with micro leveling adjustments. But also try to "nail" the level mounting of the mount.

With Ken’s help, I was able to get the bracket level, but had more of a problem leveling the brackets on the back of the set. Thankfully, the adjustment pins on the back of the mount took care of that problem for me. According to a torpedo level, it’s correct now. Tomorrow, I’m hoping to get the rest of the components installed and then I’m just going to twist-tie the wiring into a bundle. I did buy a cable management solution I really like, but I’m going to wait to do that until I can find the pictures I took of the framing of that wall because the stud finder ended up with some very interesting results.

Then, I’ll be going through the rest of the junk that was in the various bits of furniture and pitching or storing anything I don’t need most of the time.

The whole thing is starting to come together, and I should have some much closer-to-final images to share tomorrow. This has so far been a lot of fun, and it even got me writing again, so it’s been well-spent. :)