This is one of my favorite moments in all of video games as well. The sound of the SNES-noise-generated rain along with the thunder in the distance and the feeling of foreboding set an amazing tone.

Worthy winner of the PC 4kB intro competition at Revision 2012 and latest example of the compact-coding tradition exercised within the demoscene, Hartverdrahtet by Akronyme Analogiker is a three minute long audio-visual trip into a procedural fractalverse, compressed into a minuscule piece of software. No bigger than 4096 bytes – less than an empty Word document, as demoscene activists like to point out – the executable file contains all the mathematics needed to generate the unfolding visual complexity and audible ambience upon a double-click. A solo effort by a talented coder who calls himself Demoscene Passivist, Hartverdrahtet reveals a mesmerizing cosmos observed through what could be an electron microscope – ethereal, greenish and a little eerie. 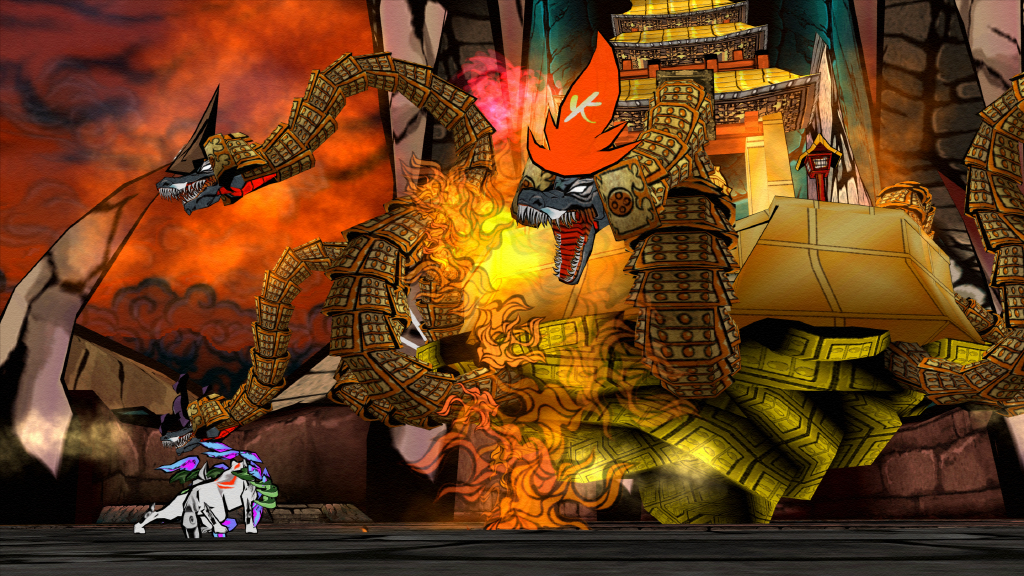 This is one in a series of images from Okami recently posted at Dead End Thrills.

Seeing games like Okami or Xenoblade Chronicles running in high-definition via Dolphin only reinforces to me that the Wii had some amazing art direction in its games lineup that was hampered by the low resolution of the system’s output.

Not upscaling when using backwards-compatibility on the upcoming Wii U further compounds the error. These games would look great with a little upscaling and full-scene effects love, but we’re not going to get to see it.

My youngest daughter is what can only properly be termed a “free spirit.” This is an example of the kinds of things she draws: 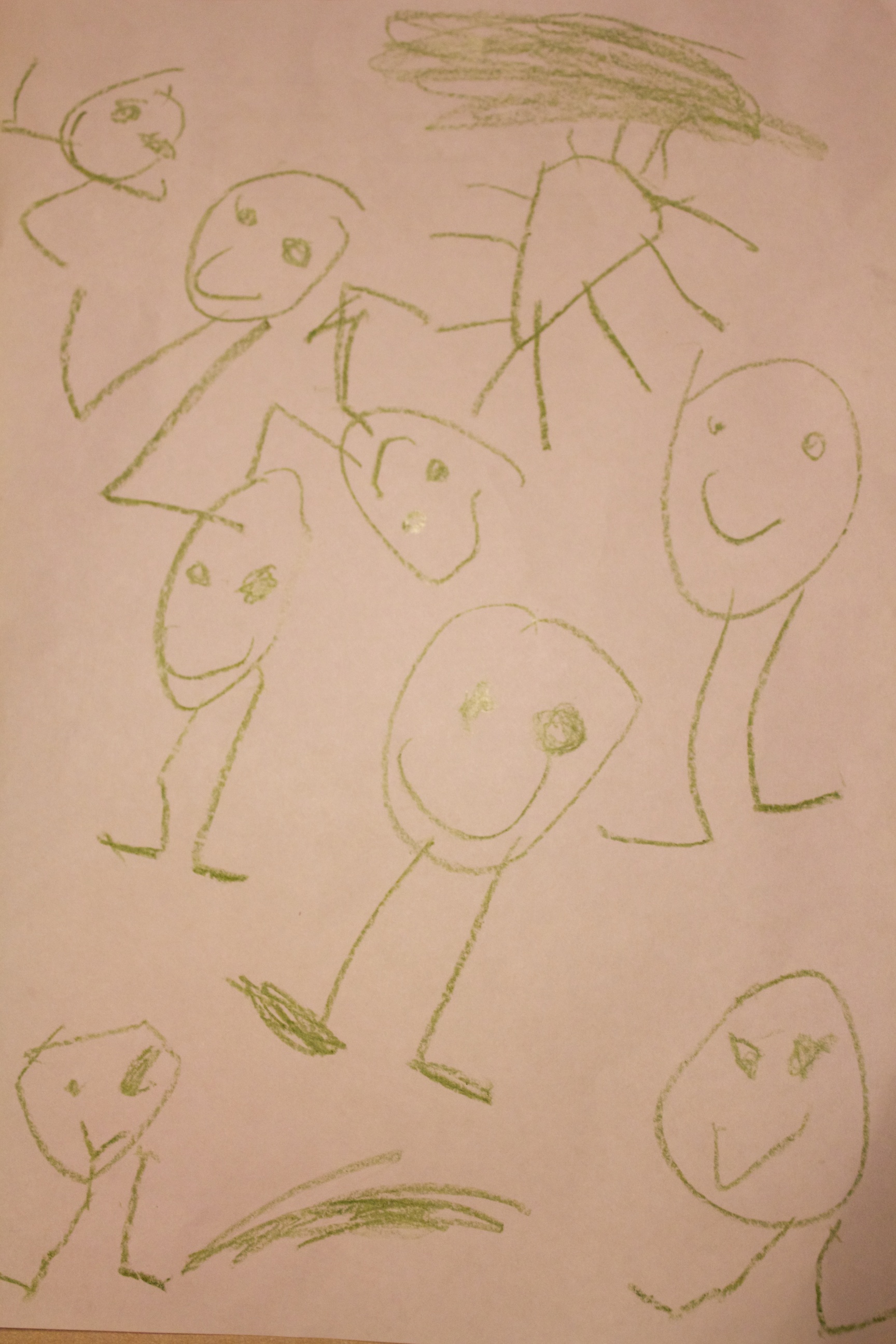 I honestly believe this is how she perceives the world around her. The sun is always shining, and people are incessantly happy. This is because she is incessantly happy. She is the girly-girl of the family, the one who skips through the house while singing songs of her own devising. And thinks ponies are awesome.

It is possible to discourage her, though it is largely an act when she responds and she is never discouraged for very long.

I wish more people had this view of the world. If we did, maybe the world would look more like this.

Mark J. Ferrari, who also illustrated all the original backgrounds for LucasArts The Secret of Monkey Island and Loom, invented his own unique ways of using color cycling for envrironmental effects that you really have to see to believe. These include rain, snow, ocean waves, moving fog, clouds, smoke, waterfalls, streams, lakes, and more. And all these effects are achieved without any layers or alpha channels — just one single flat image with one 256 color palette.

Unfortunately the art of color cycling died out in the late 90s, giving way to newer technologies like 3D rendering and full 32-bit “true color” games. However, 2D pixel graphics of old are making a comeback in recent years, with mobile devices and web games. I thought now would be the time to reintroduce color cycling, using open web technologies like the HTML5 Canvas element.

This demo is an implementation of a full 8-bit color cycling engine, rendered into an HTML5 Canvas in real-time. I am using 35 of Mark’s original 640×480 pixel masterpieces which you can explore, and I added some ambient environmental soundtracks to match. Please enjoy, and the source code is free for you to use in your own projects (download links at the bottom of the article).

Ferrari really was a talented artist in the medium. Monkey Island and Loom are classics partially because at the time they were visually arresting.

The demo of the HTML5 Canvas elements has to be seen to be believed. Show the additional options to see the palette shifting apart from the image itself.

And the code is LGPL to boot.

Last night, I started playing the beginning of Heavy Rain. Based on what I’d read about the game so far, what I had expected was a new type of experience in games, one leaning more toward what director David Cage calls “interactive drama.”

What I found was something more intense.

(Mild spoilers for the first 30 minutes of Heavy Rain follow.)

Ethan Mars is one of the four main characters in Heavy Rain, and his story is the first one you’re exposed to. The prologue of the game takes place in a rather ordinary setting. You’re taught how to manipulate the controls in the context of Ethan’s son’s birthday. You wake up, take a shower, get dressed, work a little bit, and play with Ethan’s two sons in his backyard.

A picture is painted—that of a successful architect, with a loving wife and two sons, who lives in suburbia, works out of a studio in his home, helps his wife with the groceries, and has trouble opening a cabinet in the living room. The scene is that of a sunny day. You can take a walk around the yard, look out the front door, and even lay down on the grass and enjoy the moment.

Between this opening scene and the dramatic turn that comes next—the shopping mall scene—the first teases you see of Ethan’s life and that of the game world of Heavy Rain are filled with light and color. The characters may have concerns, but things look generally optimistic and bright.

The moment that closes the prologue changes everything. After a sequence where he tries to find his son in a busy mall (and can’t), Ethan is forced to dive in front of an oncoming car in a desperate attempt to save his son’s life. As the prologue concludes, it is clear that he is unsuccessful. The closing scene is Ethan’s son’s bright red balloon floating into the air while the cries and pleas of his wife are heard over an astonished group of onlookers.

After the credits, you are reintroduced to Ethan two years later. He is unkempt: his hair is a mess, he hasn’t shaved in a while, and he has moved to a broken-down home in the city. His wife is nowhere to be seen. You spend your next moments picking up Ethan’s younger son from school, fixing him dinner, and helping him with his homework, but it’s clear he doesn’t want to be around Ethan—he barely responds when talked to.

And it’s not just the interactions that give you context. The city is a place where a heavy rain falls without pause. The sky is a foreboding grey, rumbles of thunder are heard in the distance, and the color (as you can see in the screen above) has been leeched out of Ethan’s world. It’s clear that either he has given up, or everyone else has given up on him.

It is not often that a game puts before us a protagonist who is so beaten, forlorn, and exasperated. It’s hard for people to associate themselves with a character who appears to be going nowhere. But in this case, in around 30 minutes of “play,” the prologue of Heavy Rain gives you a context for Ethan’s development (or regression, if you want to see it that way). Losing his son changed his life for the worse—as I imagine it might for a great many people.

As a father, this had an astonishing amount of impact. It makes you think. What would your life be like if it were you going through similar circumstances?

It is a refreshing change of pace that a game has triggered these feelings and thoughts. I also know from what I’ve read that things are only going to get worse for Ethan; I’m interested to see how far this experience pushes the bounds of storytelling. 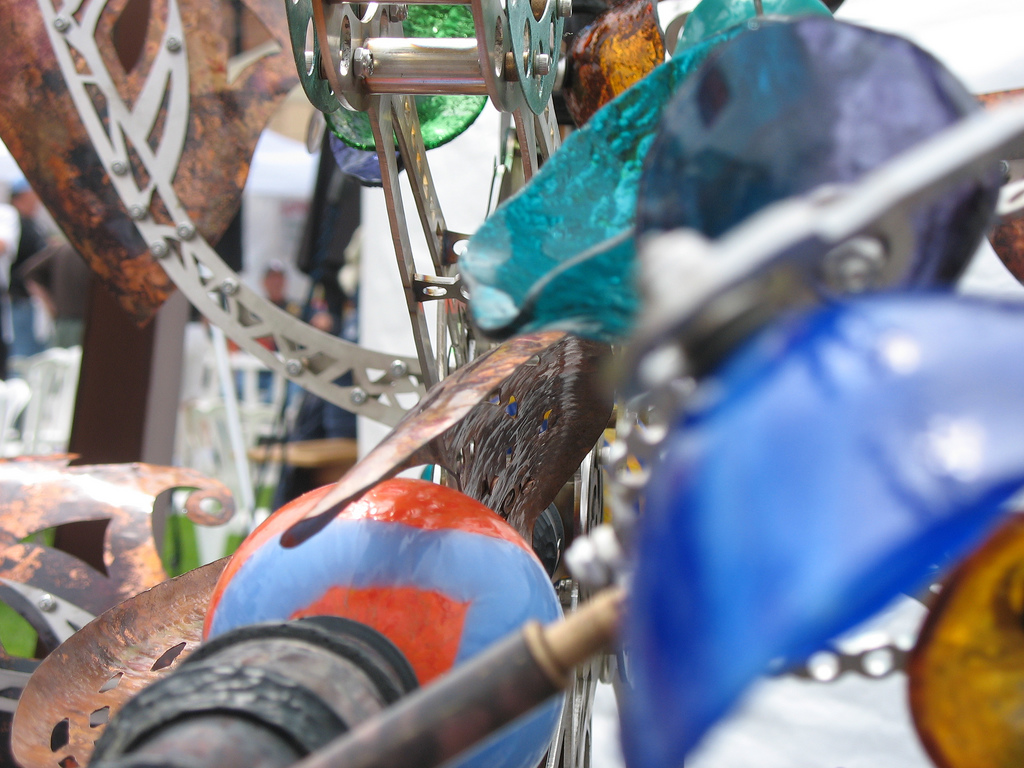 Each year, Belleville, Illinois plays host to Art on the Square, which is a rather unique gathering of artists from all over the country (and in some cases, the world). They descend on Belleville to set up in the downtown square in individual tents, proudly displaying their craft and offering fine art, photography, sculpture, jewelry, glasswork, and woodwork of all shapes and sizes. It’s really a fascinating sort of event. They block off about four blocks’ worth of street in the downtown area just to hold it, including the roundabout that’s right in the center of town.

This year was the second time we’d visited. There’s no way we can afford many of these pieces of art (some of them cost into the thousands of dollars), and I’m always nervous taking the kids for a walk around the square when just about everything around is breakable, but it’s always an enjoyable time. This year, the weather was nice and cool, the sun was shining, and as always the people were friendly. It’s a great thing to be able to engage the artist, to ask about their work, how and why they create it, and where they are from.

We plan on continuing to go each year. Someday we’ll take back a piece of art to adorn the walls of our home.

I’ve prepared a small flickr photoset with additional images of the event. If you’d like, check it out.

“Art is a collaboration between God and the artist, and the less the artist does the better.”–Andre Gide

I desperately want to join in on forum threads and read up on the Internet about what I have just experienced this evening, but since I have not yet completed all the tasks in front of me, and I’m trying very, very hard to remain spoiler-free, I am simply avoiding all talk about it with others.

However, I do have this avenue of communication, so I’m going to write down a few thoughts about what I’ve been doing most of the night for the past three or four nights, because it has been amazing.

BioShock spoilers will abound after the break. I urge you: if you ever plan to play BioShock (and you should), you should not read ahead until you have had a chance to give the game a playthrough and at least decided if it’s for you or not. Playing the game without being spoiled in any way has been tremendously rewarding for me so far in the process, and I would hope never to disrupt that kind of enjoyment for someone else.

Know this, however: BioShock is so finely crafted and meticulously designed that it is not merely intended to be played, or even to be experienced, but to be relished the way one appreciates a gourmet meal or a fine wine. When your time comes, I hope you will take every opportunity to enjoy it.