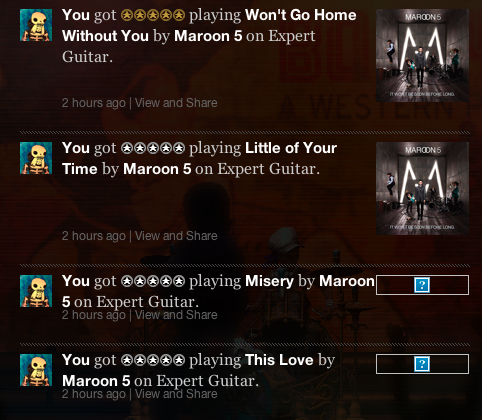 Good sight-reads (includes one track that was released in the first pack but I hadn’t cleared in RB3 yet). :) Chord-heavy, but generally fun to play and some decent challenge in there with the patterns.

Maroon 5 is one of those bands I enjoy listening to for reasons that aren’t quite clear even to me. I was happy to see some more tracks in the Music Store.

A couple of weeks ago I picked up the Pat Benatar pack for Rock Band, mostly out of curiosity. Last night I played “Love Is a Battlefield” for the first time and found it to be a lot more fun than I was expecting. I suppose I hadn’t listened to what the guitar was doing in the background before.

I did 95% on sightread, which was good enough for 1,496th on the leaderboard.

It’s not the best Benatar on Rock Band, though; that honor goes to “Heartbreaker.”

My Rock Band activity page is here, by the way. I really wish Harmonix provided RSS feeds or another way to ingest this information elsewhere. I turned on the Facebook integration today, but I prefer to bring this stuff into my own site where I can control it.

Sold. A thousand times sold, just for “Black Magic Woman,” but “Somebody to Love” is an unexpected treat.

I’m not sure I want to put myself through this again, though honestly “Through the Fire and Flames” has some good memories attached to it. And it’s kind of stupid fun, even if it is ridiculous.

I present as proof:

I hate Poni Hoax’s “Antibodies.” It isn’t fun to play. It’s not even really a good song. And it’s ridiculously under-tiered in Rock Band 3 for Guitar. 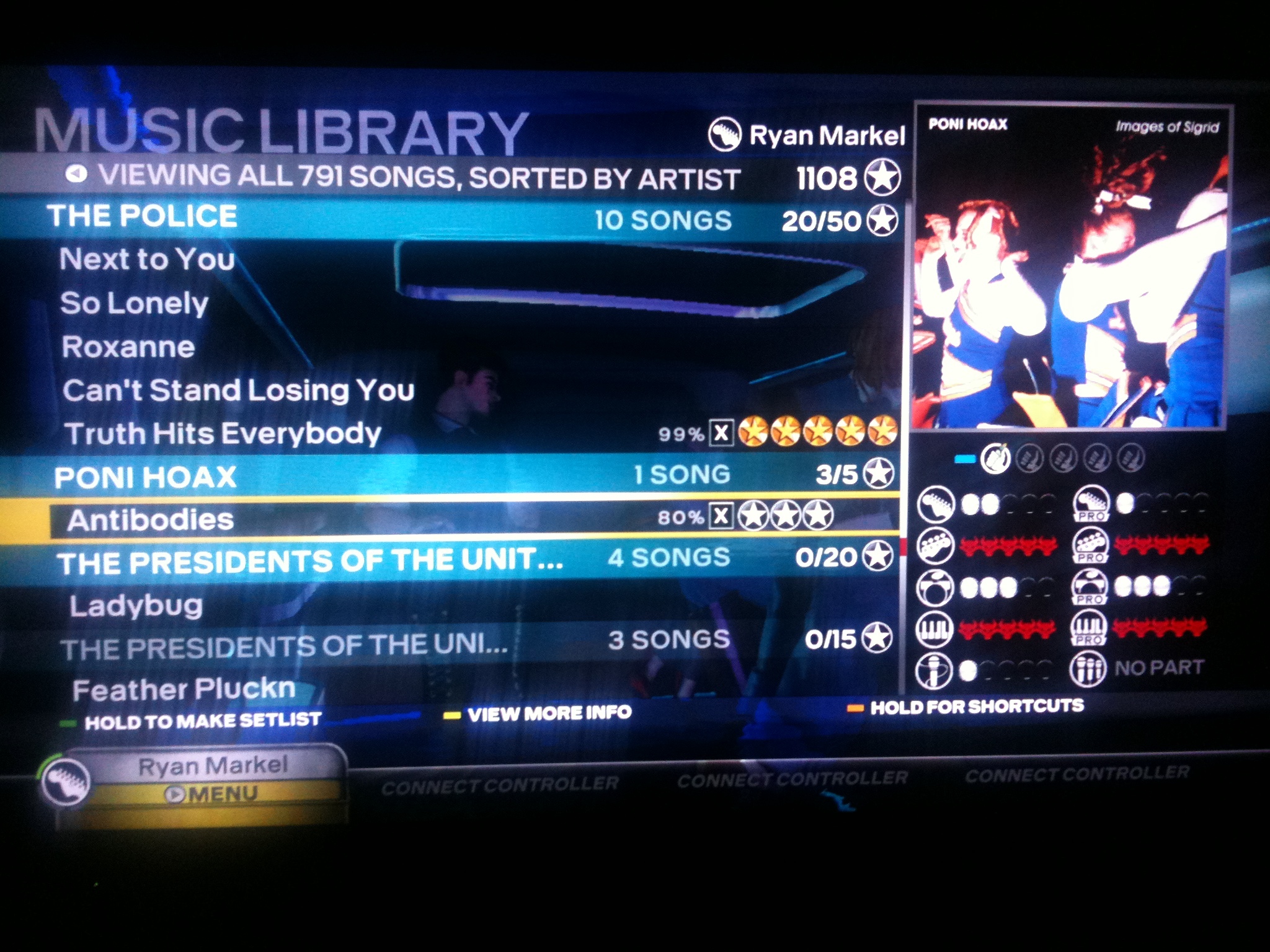 It’s possible this is just one of those songs I can’t wrap my five-button-brain around, but I expect much better of myself for a Tier 3 song. I couldn’t one-lighter this one fast enough.

Ken and I spent a good portion of the day rocking out with RB3.

Will try to blog some on it tonight.

Rock Band Pro mode is all about potential. It’s about the individual player’s potential to move on up to the next, optional level of difficulty in the game, and, eventually, the player’s potential to make real music with a real instrument. And as Harmonix reps told us, it seems “designed to show the potential of what the music category can do in gaming” — if anything can answer that question of whether music games can translate to the real world, this mode will do it.

My anticipation for the new challenges inherent in Pro Mode is at a ridiculously high level. It’s like taking Expert in Rock Band 2 and then pushing it over a cliff.

But it’s a really awesome cliff.

You can safely file this under the “things that dominate small corners of my brain” department.

The focal point is in a bad place, and the buttons on this thing are too loud. All I did was take the Mino and slap it on the headstock of the fake guitar with some putty. If I wanted to take this all the way, I’d design some kind of a mount for it to elevate the camera and get some angle on the buttons, and then a counter-weight for the body of the guitar (it added a not-insignificant amount of weight to the headstock).

As unfair as it is, what initially gave us hesitation about Mad Catz and Squier’s Stratocaster Pro guitar controller was that, well, it’s Fender’s second-tier brand. Despite these prejudices from our youth, Harmonix pretty much sold us on it with one pretty badass trick: the ability to simultaneously play Rock Band 3 on Pro Expert and rock the same tune through an amplifier.

Watch the video to see it in action. This is a crazy step forward for music video games and could be a downright interesting way to teach people how to play guitar.

Really, the main focus of Rock Band 3 development was finding new ways to experience the music and actually doubling down, if you will, on our investment in compelling game play.

“We are adding a new instrument (a 25-key, fully functioning MIDI keyboard) and we’re adding a whole new mode, which is designed basically to answer that staleness factor.”

The result, he says, is “an experience that is both accessible to players who are just getting into this thing, and builds something for the hard-core player who is maybe a little bored with where music games are.”

This is one of the weirdest places I can think of for this news to be broken, but this has me so re-excited about music games. Stuff to look out for:

That screaming sound you heard was my wallet, begging for mercy.