For some time now I’ve wanted to have a gadget that would allow me to grab footage from games I’m playing and either stream that content to a service like Twitch.tv or post it to YouTube or VideoPress. Over the last two weeks I’ve purchased a couple of solutions to try them out and after some testing I think I’ve found the winner, at least for now.

The one I won’t be returning is the Elgato Game Capture HD, and for most people who would like to capture gameplay, I can recommend it as a starting point for capturing gameplay video. I’ve done some tests with the device and will insert them throughout the review; all YouTube videos in this post were captured in my living room using the Game Capture HD.

What’s in the Box?

The Game Capture HD is a pretty simple package. You get:

In short, everything you need to use the device comes with it, which is very handy. As far as the computer hardware you need, it’s best to look this up on Elgato’s site, but it works with USB 2 (something its competitors sometimes don’t), is completely external, and works with both PCs and Macs. (I did my testing on a Mac.)

The device itself is not much larger than a deck of standard playing cards:

As you can see, there isn’t much to it. On one end, there is an HDMI out, which is a passthrough to your TV or other monitor, and the mini-USB connector that goes to your computer: 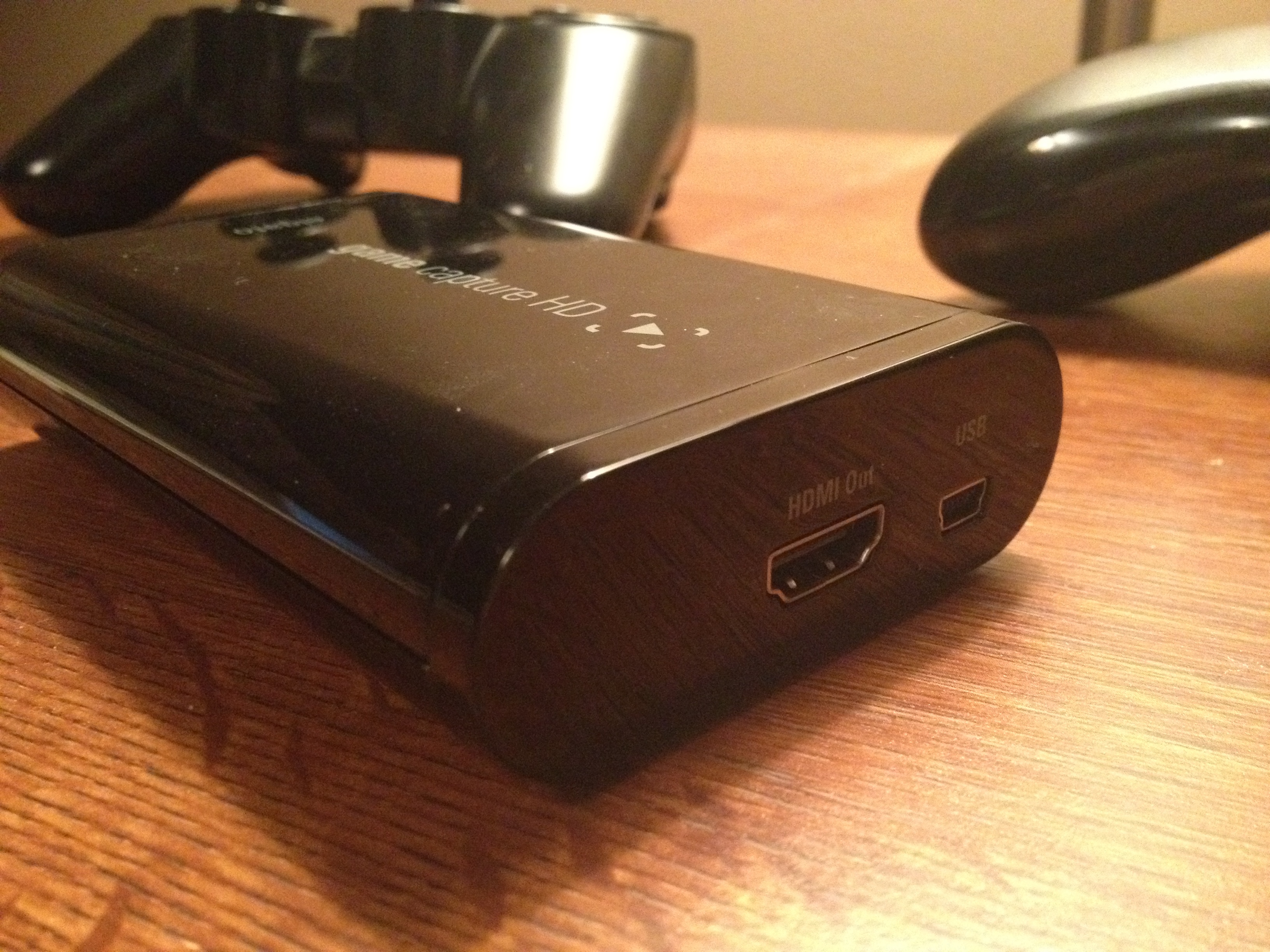 And on the other end, there is the HDMI in and the DIN in, which can accept either the Ps2/Ps3 cable or the component breakout: 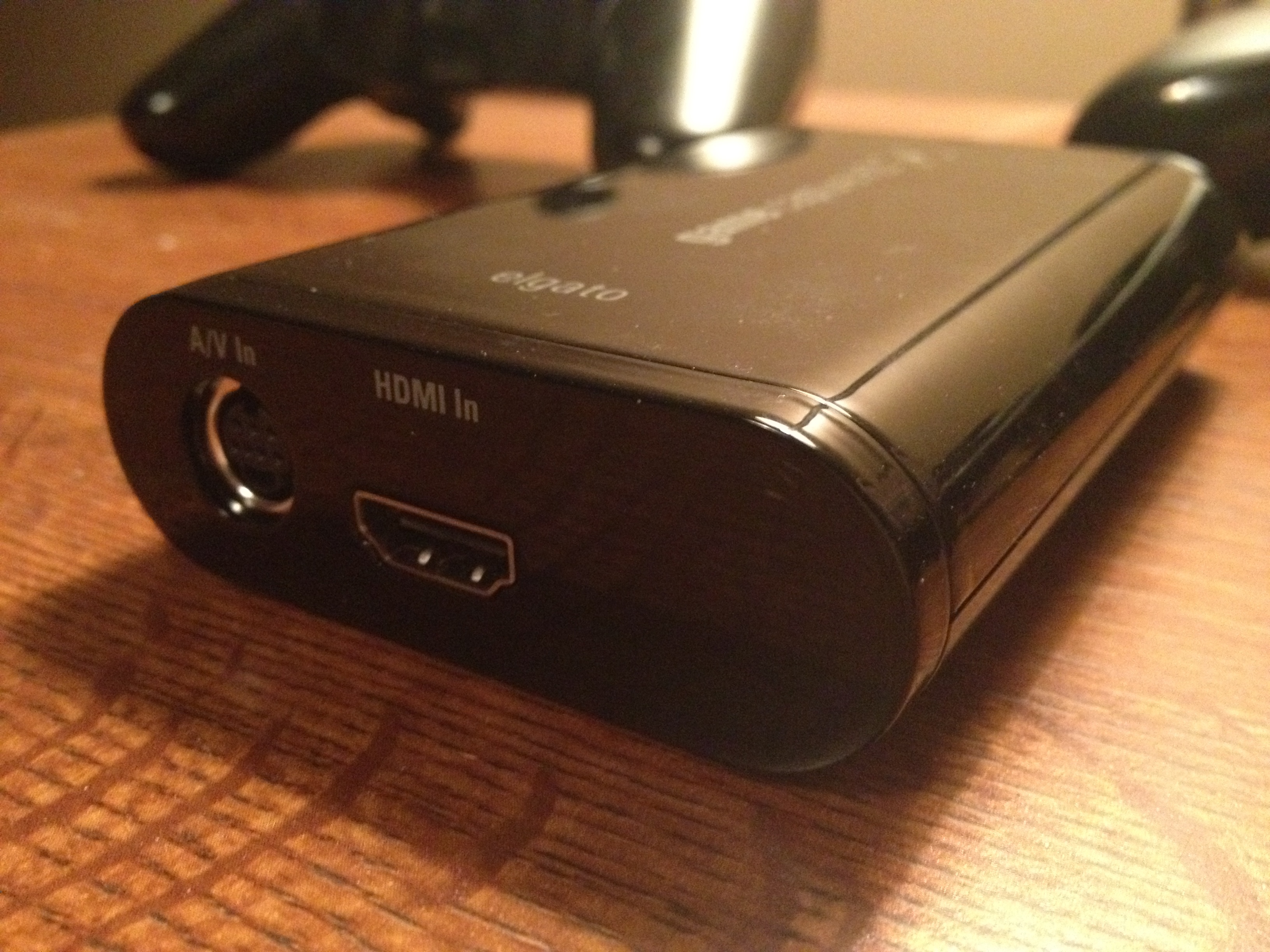 That’s the extent of what you get when you buy it. You’re not left without anything, which considering the price of the unit, is quite nice. All the cables you need to hook it up come with it. You will need to download the software from the Game Capture site, which is a small (<100 MB) download and consists of only one application that is installed to your computer. It’s as minimalist as I think a capture box can be.

What About the Software?

The software itself is pretty simple and easy to grasp. When you start it up it will wait for you to connect the device if you are in the Capture screen. 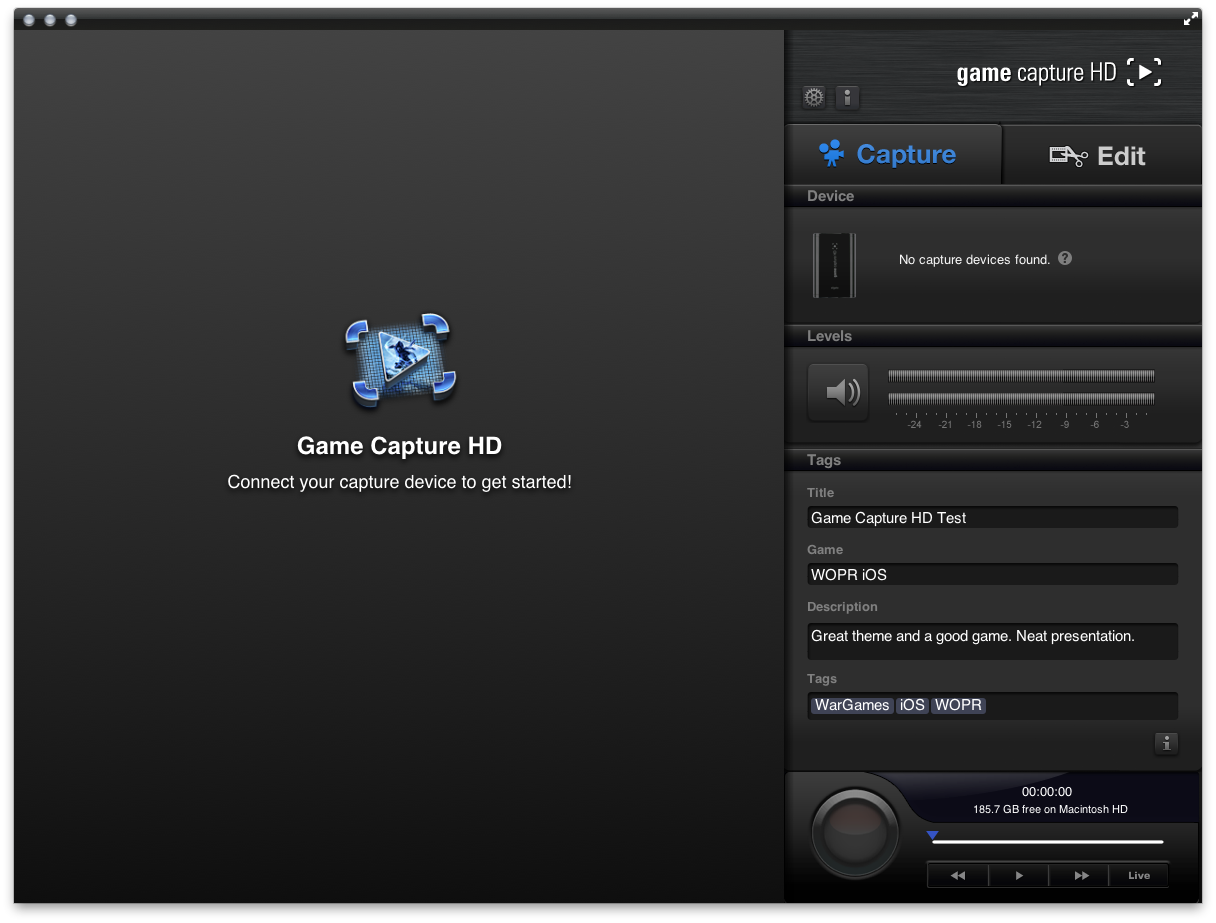 Your input to the capture device is shown on the left. To the right, you can set options for the GCHD, check sound levels if input is running, give title information for the video before you start, and start the recording. The options that are available are pretty easy to figure out as well: 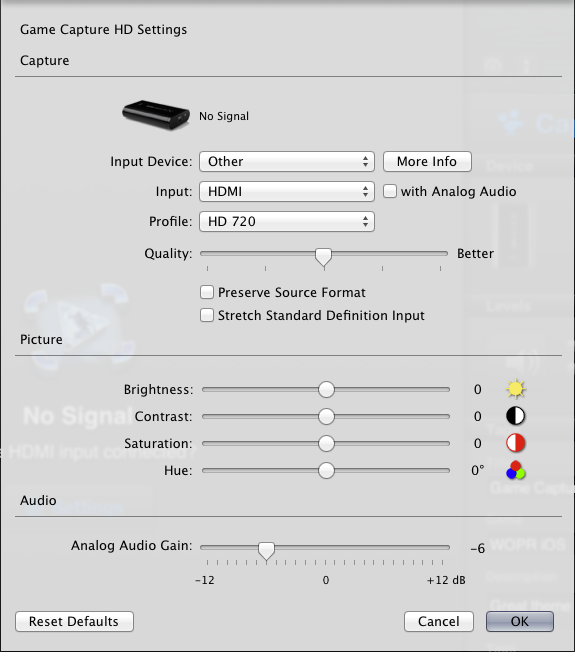 “Input Device” will tell the GCHD what to expect, from a choice of Xbox 360, PS3, and iPad, though as long as you have the input source selected properly, I found that it was pretty good at adjusting to whatever I had hooked up to it. You can adjust the bit rate of the compression used as the device sends the video to your computer for storage, and if you want you can also make some image adjustments – though those adjustments will also be reflected on your display, so I didn’t use them.

On the Capture screen, there is a short timeline in the corner near the big giant record button:

This acts as a buffering interface, much like a DVR. If you are running your game through the GCHD, it will automatically buffer the last hour of gameplay for you. If you want to begin recording, the default option is just to start with the current live point of the video, but if you would rather back that up to catch something awesome you did before starting the record, you can scrub the marker back on the timeline and adjust the starting point.

This is a nice feature and if you are cool with running your game through the GCHD all the time, can save a moment here and there that you might not otherwise have caught.

When you want to work with the video you have already collected, you use the Edit screen. 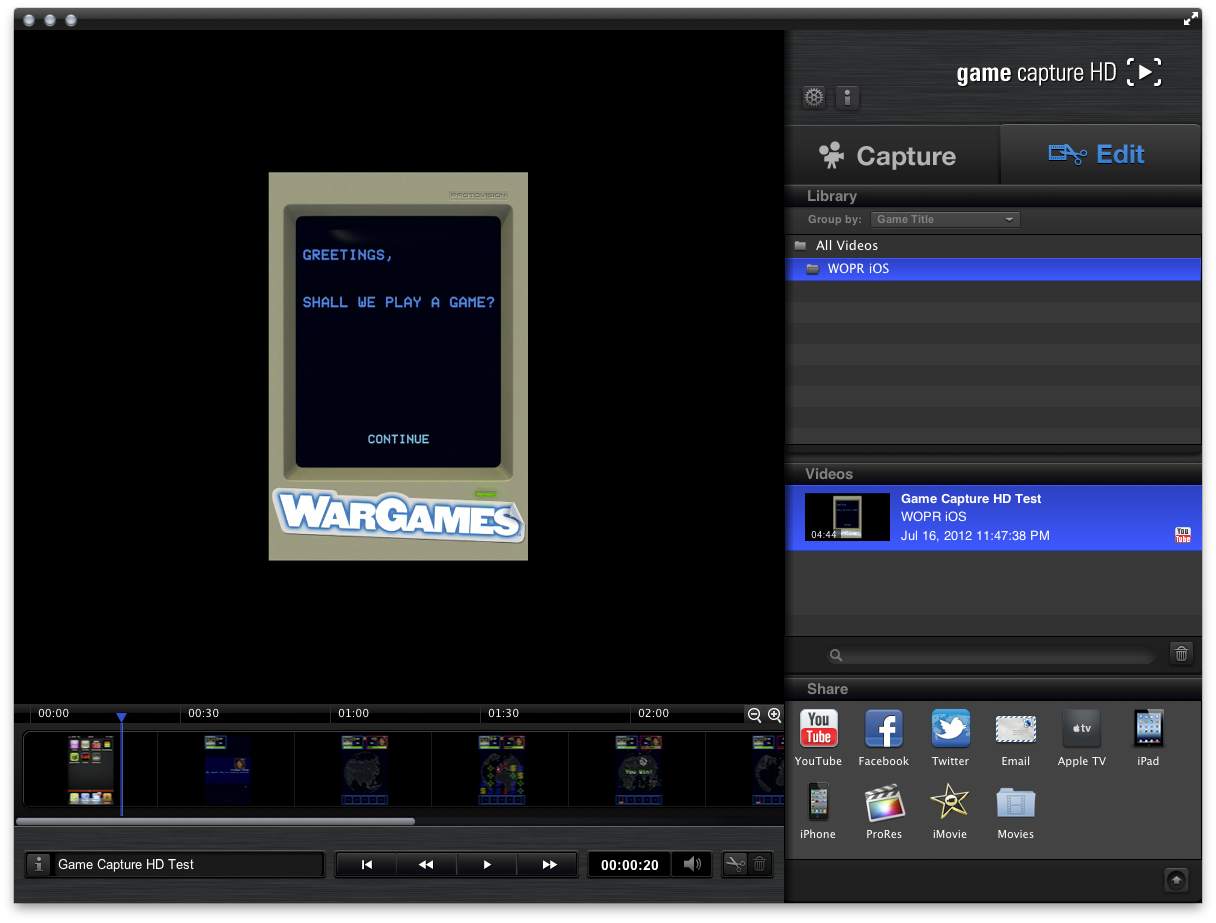 Your already-recorded videos are arranged based on the game title you entered when recording each video. There is a timeline view that has rudimentary razor and delete tools, and you can review the video as you please. There are also built-in exporting options in the lower-right. You can configure GCHD to use each of those services and it will appropriately compress the video for you and then upload the video as you need. You can see that it will also create local files for you optimized for your devices—or if you would rather move to something like Final Cut you can just dump a ProRes version and carry on.

The one-touch record and export are definitely the best parts of the package. Hooking up the GCHD is dead simple and using the software is even easier. It’s game recording at the push of a button, and you don’t have to know the slightest thing about video codecs, compression, or editing to get your footage shared to a bunch of services. In that way, if you are just looking to show people some games, and you don’t want to drop a serious amount of cash, it’s a great device. I never had a problem with it doing exactly what it advertised, and never had a hardware freeze or a software crash in all the time I tested it.

The video management is pretty good and keeps things organized and easy to find. File sizes and types are manageable, and you don’t need a high-performance computer, hard disk array, or data transport to use it. Having it run on USB 2 must not have been simple, but it works and means that a lot more people will be able to use it.

It will also record video from an iPad 2 or later, or an iPhone 4 or later, as you can see:

This is really neat, because I figured it wouldn’t be this simple. With the GCHD it’s just plug-and-go. If you are a software developer and you would like to give demos of iOS applications using video, this would be a great tool to have.

That said, there are a few hangups, depending on what you really want to do.

Where Does It Fall Short?

You shouldn’t buy the GCHD if any of the following are really important to you out of the box:

Let’s talk a bit more about those.

The main problem that gets in the way of those is that the device itself is doing a lot of the encoding before the video even makes it to your computer. Because of this, there is a delay (depending on the bit rate you are using) that is a few seconds between what you are doing and what appears in the GCHD software. (This delay doesn’t affect the passthrough, which works flawlessly.)

The GCHD software doesn’t have any method available to mix in additional sound sources such as a microphone to your video. I hope this is something they are looking into adding in a future update because I know the lack of commentary ability will turn off a lot of people, like Minecraft players for example. If you wanted to you could record audio at the same time and then mix it in using an app like Premiere after the fact; you would just need to deal with the timecode difference—but it’s a lot of work to do all that.

Similarly, you can’t stream the video directly from the device. It doesn’t function unless the matching software is running on your computer, and it doesn’t appear as a capture device in any other applications. I did some gymnastics with my computer using CamTwist and recording the GCHD software window to pipe that into Flash Media Encoder, but that just made my MacBook sound like it was going to take off and the footage didn’t look all that awesome. I think it’s too much work for most mortals. As with the commentary thing above, I hope this is in mind at Elgato for a future update. It’s definitely on my wish list.

Other limitations that might give you pause but are far from stowstoppers:

Some of the stuff that’s listed above can be alleviated with a software update or two (or so I would guess), but there are some things that are just limitations of how the device is made and intended to be used.

What Else Did I Test?

For purposes of making a wise decision, I also tested a Blackmagic Intensity Shuttle Pro. I was originally going to keep it, but after some additional testing I decided against it. Without getting into that device too much, my comparisons:

What it does better: is a capture device and so can stream directly: theoretically no audio lag: can be mixed with other audio sources; can capture from SD sources; more powerful overall.

What it does worse: definitely not plug-and-play; requires USB 3 or Thunderbolt (depending on model); much more CPU-intensive to use; doesn’t compress on the fly; had an audio lag I couldn’t resolve in practice; brought my computer to its knees; streaming was promising but ended up muddy and choppy in the end.

In the end, I kept the option that was simpler mostly because I can’t afford a new computer right now. I really want to stream gameplay, but I think I am going to have to look into building a PC specifically to do that at some point and use an internal card solution from AVerMedia.

Conclusions: Should You Buy One?

If you are looking for a low-cost ($180 on Amazon) and easy-to-configure way to capture your gameplay footage and post it to YouTube or share it on your blog, it’s a winner. It’s quick to set up, portable, simple to use and figure out, and gets the basics right. With some additions to the software in the future, it could be the only piece of hardware you would ever need for capturing footage from the current crop of consoles.

It works with lower-spec computers than many of the other options out there, is pretty much the best solution I have seen for the Mac, and can ever grab stuff like iOS footage without needing to goof around with settings and video formats.

If you have questions about my review or the GCHD, drop a comment below. Otherwise, watch 10 minutes of Pai and don’t forget to tip on your way out:

I’m now the proud owner of one 16-gigabyte iPod touch, and after a good half-day of messing with it and playing to try and figure the thing out, I have to say that I’m coming away from the first experiences very, very impressed. I find that music library management is going to be difficult for me, at least at first, as I’ve just now filled up my 40-gig fourth generation iPod, and Smart Playlists have become much more important for both iPods. I may have to pick up a 160-gig iPod classic at some point to continue to have at least one device that contains my entire music collection.

In any case, I wanted to jot down some of my thoughts for those who read, so if you’re thinking about picking one up, or you have questions about it, I figure more of those will be handled by what I have to say. You can already see some of my commentary in my tweets from earlier this evening, while I was messing around with it.