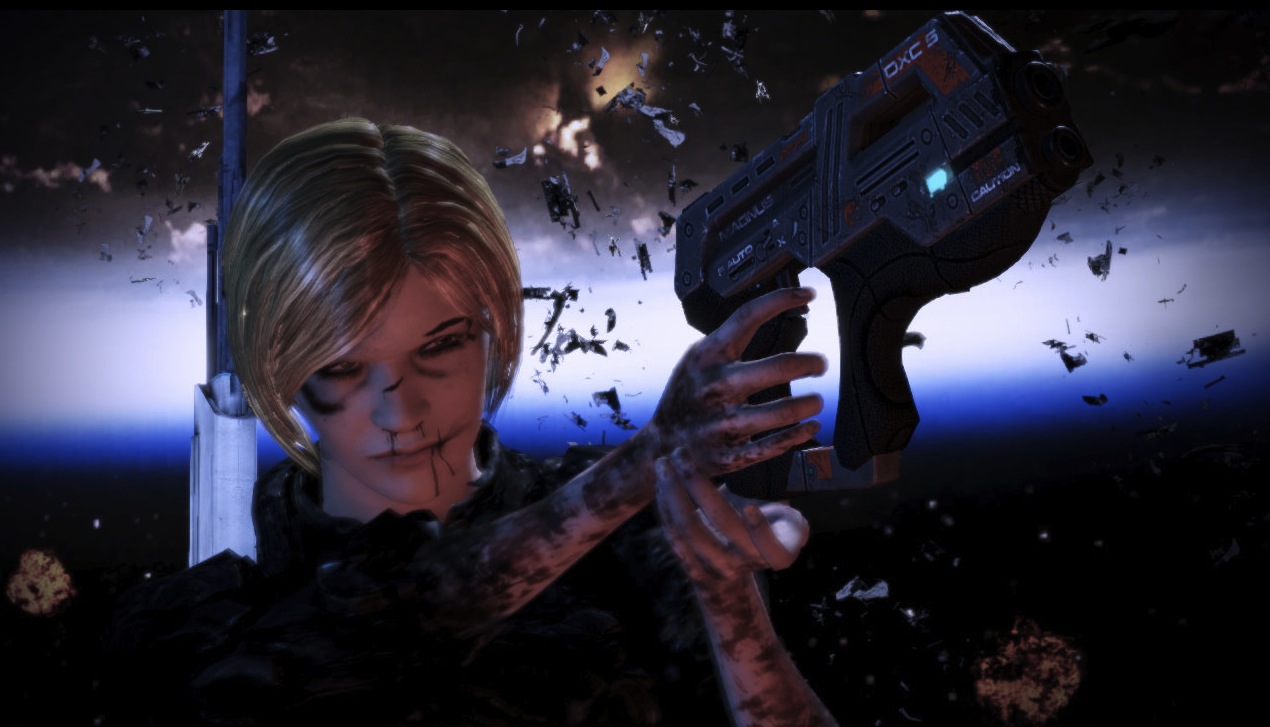 If you’ve read this blog over the past few months you no doubt ran headlong into my rather lengthy deconstruction of how Mass Effect 3 went off the rails story-wise in the last 30 minutes or so.

This week, BioWare released a 2 GB add-on for Mass Effect 3 that padded the ending of the game, adding a pretty significant amount of voice acting, cutscenes, and rearranged bits to the game. I ran through it myself and I certainly see what they did and how they filled in the gaps. There are indeed several questions I raised in my own review that have been answered by the updated ending, including:

Even with those, we’re still left with some other questions, and more importantly, something that’s been made significantly worse.

What BioWare Did Well

There was clearly a lot of effort put into this extension of the original ending. There is some pretty fantastic added voice acting that fits with the original tone and was (once again) expertly directed and acted. I think the VO studio at BioWare is the best in the business.

There is some additional dialogue (if my memory serves me correctly) during the conversation with the Illusive Man at the end that is well-placed and increases the desperation of the moment as well as providing some additional insight into TIM in his final moments. I still think TIM was a bit wasted in the end, but more is never a bad thing.

The new cutscenes, beth rendered and in-game, are as well-done as the rest, and there is an additional sense of closure after the Space Magic does its thing. Some added details and a few changes to the original cutscenes (like the shift in who appears when Shepard makes his run to the final decision) are well-placed and extremely thoughtful.

Sam Hulick outdid himself with the extensions on the music. “An End, Once and For All” remains one of the most directly tear-jerking and emotional pieces of music ever written for the medium and the added sequences don’t change that  bit even though they have to fill a lot more time.

I think some thanks are in order—regardless of what you think about what was changed or what we got—because if the tweets I have seen over the last few months are any indication, the Mass Effect team at BioWare poured serious amounts of overtime and love into this project. For that alone, and for the fact that they did anything at all, they deserve a pat on the back as I believe this situation is the first of its kind.

But now, let’s talk about the not-so-good of the Extended Cut.

After some distance from completing the game, I found that I really didn’t care too much about the actual endings because by that point they had already screwed up the narrative so much that it didn’t matter.

The real problem is the Catalyst.

Allow me to refresh your memory: 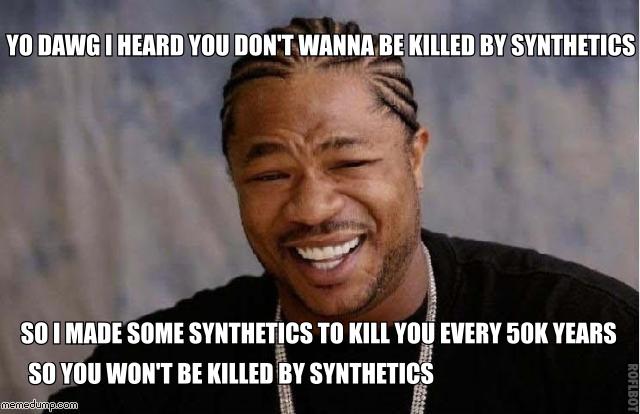 Remember that at the end of the game, after Shepard passes out at the Citadel control panel, he is carried up to the top of the citadel on the wings of angels using a magic elevator portion of the floor, where he meets the Catalyst, which was a ghostly apparition of the Child from the beginning of the game.

It wasn’t really clear in the original version who you were dealing with or what was going on, but it was presented as HERE’S THE REAL REASON PEOPLE ARE DYING, K and then after a very small amount of explanation you make the choice at the end.

Again, in my original critique, I said:

There’s a tiny bit of “yeah, OK, that kind of makes sense” in there, even though it’s a remarkably closed-minded and megalomaniacal viewpoint. At this point I want my Captain Sheridan Option to say “get the hell out of our galaxy”[…]

These choices are being handed to you by the very enemy that you are seeking to destroy. The Child says that he is in control of the Reapers. By this train of thought you should consider the child to be the most unreliable source of information possible. There is no narrative reason why you should trust a word the Child says. But that doesn’t appear to matter in this instance, as Shepard is just like “YEAH THAT’S COOL THANKS FOR THE INFO KID” as you trudge towards the ending of your choice.

I also hat-tipped the Indoctrination Theory in my post, and after the Extended Cut, I agree with Sophie Prell and think that BioWare missed an opportunity to utilize that idea of the ending and find the sweet spot.

So apparently the decision that was made was to add more exposition to the dialogues with the Child.

The problem with this is that they didn’t solve anything—they just made the narrative dissonance worse.

To the script! We get three new wheel options when responding to the Child at the end, just before the choices are revealed. They are, from top to bottom, Catalyst, Reapers, and Crucible. If you look at the script, there is a narrative flow to them if you go from top to bottom. So let’s do that.

Keep in mind our pal Xzibit up there. We’ll get back to him.

S: You said you’re the Catalyst, but… what are you?

C: A construct. A intelligence designed eons ago to solve a problem.

So we’re dealing with an AI of sorts. Which means the Catalyst is technically speaking a synthetic organism. OK.

C: I was created to bring balance, to be the catalyst for peace between organics and synthetics.

Hmmm… a synthetic life form was created to broker peace between organics and synthetics. Hope he’s not a hometown referee.

C: In as much as you are an animal. I embody the collective intelligence of all Reapers.

OK, so you are essentially the bad guys who have been trying to kill me for the last three games.

S: But you were created…

C: By ones who recognized that conflict would always arise between synthetics and organics.

So you mean some race who figured that their mistakes would be everybody’s mistakes. Closed-minded, and still doesn’t change the fact that I made peace happen without your help, but all right. Keep going.

C: I was first created to oversee the relations between synthetic and organic life… to establish a connection.

C: But our efforts always ended in conflict, so a new solution was required.

Tell me more about these Reapers, young ghost boy.

S: Where did the Reapers come from? Did you create them?

C: My creators gave them form. I gave them function. They, in turn, give me purpose.

C: The Reapers are a synthetic representation of my creators.

Proving the Xzibit Logic as embodied above.

S: And what happened to your creators?

C: They became the first true Reaper. They did not approve, but it was the only solution.

The thinking of the Xzibit race that created the Catalyst: 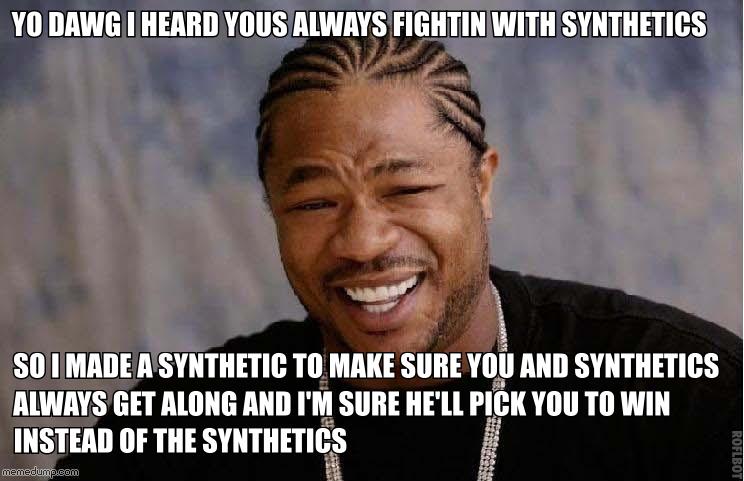 S: You said that before, but how do the Reapers solve anything?

C: Organics created synthetics to improve their own existence, but those improvements have limits.

C: To exceed those limits, synthetics must be allowed to evolve. They must, by definition, surpass their creators.

So this AI is far from impartial. It assumes that synthetics are always the more evolved form of life. Sounds like I should trust him with the fate of all things.

C: The result is conflict, destruction, chaos. It is inevitable.

C: Reapers harvest all life—organic and synthetic—preserving them before they are forever lost to this conflict.

At least now we know what will happen to the geth, though I seem to recall that at some point there was a statement that the Reapers would just destroy the geth, not harvest them.

S: We’re at war with the Reapers right now!

C: You may be in conflict with the Reapers, but they are not interested in war.

S: I find that hard to believe.

C: When fire burns, is it at war? Is it in conflict? Or is it simply doing what is what created to do?

C: We are no different.

C: We harvest your bodies, your knowledge, your creations. We preserve it to be reborn in the form of a new Reaper.

C: New life, both organic and synthetic, can once again flourish.

So… you are going to take peace-loving civilizations, process them, turn them into paste, then put them into a really big synthetic body—ALL OF THIS AGAINST THEIR WILL—and make them kill others without any free will of their own until the end of time? Sounds like a fun time; bet you’re a hit at parties.

S: What do you know about the Crucible?

C: The device you refer to as the Crucible is little more than a power source.

C: However, in combination with the Citadel and the relays, it is capable of releasing tremendous amounts of energy throughout the galaxy.

C: It is crude, but effective and adaptive in its design.

S: Who designed it?

C: You would not know them, and there is not enough time to explain.

Translation: I need to hurry this conversation up before you have time to think about what I have been saying.

C: We first noted the concept for this device several cycles ago.

C: With each passing cycle, the design has no doubt evolved.

C: We believed the concept had been eradicated.

C: Clearly, organics are more resourceful than we realized.

Translation: UH OH we didn’t think you would get this far.

The last part about the Crucible isn’t nearly as interesting as it’s largely just “hey, this is the MacGuffin, just roll with it,” which I don’t have much of a problem with.

Unfortunately BioWare took the Child/Catalyst that made no sense and dropkicked you into the decision and turned him into Exposition Kid who does nothing but give you more reasons not to trust him! Before, it was just “I know all this and here’s what we’re about, it’s cool, just go along with the plan” and now it’s more “my creators were a bunch of idiots and I do nothing but follow my own twisted and self-righteous ideals, but, hey, it’s OK, what’s the worst thing that could happen?” (Read my previous post for more on why the Catalyst never made any sense in the first place.) 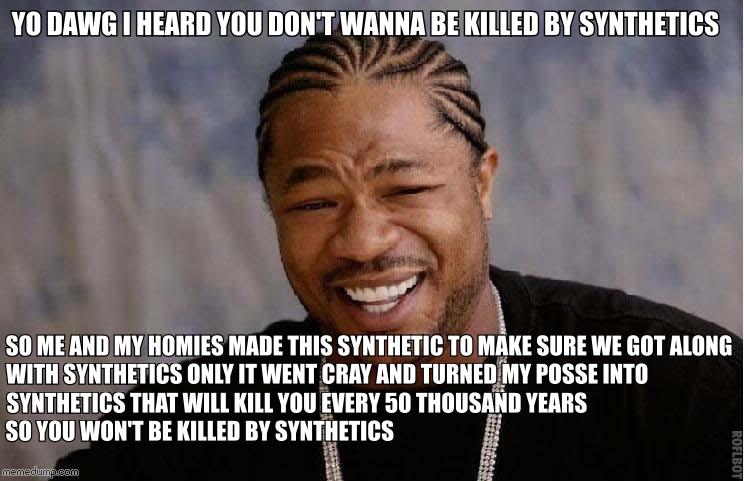 Narratively, if you think you can trust even a word the Catalyst says in the whole conversation, I would argue that you have a moral obligation to choose Destroy—even more than the last time. (Again, this is borne out IMO by the breath intake after the ending and also by the fact that it squares best with Indoctrination Theory.)

Unless you’re pure Renegade, in which case you should pick control and become Alpha Reaper, crushing all resistance beneath your iron… fist. Leg. Thing.

5 comments on “Shepard vs. Xzibit: The Mass Effect 3 Extended Cut”