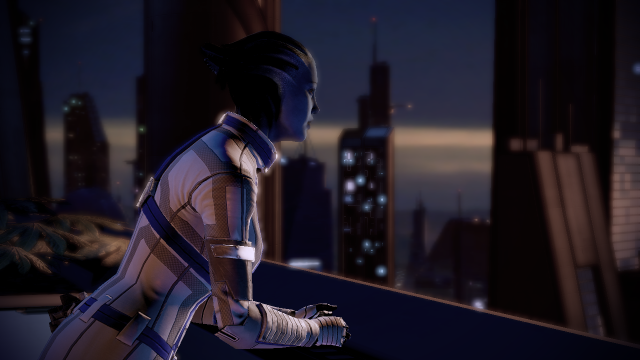 Go Make Me a Sandwich:

Even now that the afterglow of having finished my first ME2 playthrough has faded (at least as much as it’s ever going to), the Lair of the Shadow Broker DLC remains one of my favorite parts of the game. Liara is an awesome, competent, not-sexualized female character who has her own agenda – which is exactly what I have been asking for by writing this blog. I can’t emphasize how important the not-sexualized aspect of that is, either.

So what happened? Were your male fans upset that Liara wasn’t sexy enough? Because I just don’t understand this blatant pandering. Even after you said that FemShep would only be on the collector’s edition cover of ME3, I was still encouraged and elated that you were making such a step at all. You’ve been talking with your fans this time around – letting us choose the FemShep we wanted on the cover, promising a FemShep trailer… It made me think that you were maybe, finally turning over a new leaf.

Agreed 100%. After Bioware somehow managed to transform the “oh, I’m so naïve and lacking confidence and need a big strong Shepard Skywalker to rescue me” Liara from ME1 into a strong, moderately complex and mysterious badass, making this figure is a mistake.