The Cards blew it on Opening Day, but that doesn’t mean we didn’t have a great time, and I think we’ve just established a new tradition here at the Markel household. There’s no possible way I was going to be able to get tickets for all six of us to go, so we had to be creative and figure out a way to have some fun while staying home during the game.

The first step is to act like a real St. Louisan and immerse yourself in the game and the festivities which surround it as early in the day as possible. This means turning on the news, because every TV stations’ news crews here were all down at the ballpark where they belong. If you want to do something heinous in St. Louis and escape media attention, Opening Day is a pretty good choice in terms of timing. A good high speed chase or even a political scandal would be a good choice.

The next step is to make sure you have access to watching the game. Thanks to a fluke of the Internet and my subscription to MLB.tv, this is not a problem, blackout restrictions or no. We were unable to verify this until just before the game was to start. Needless to say, I was holding my breath, but I would have listened to it on the radio, even if I would have had to withstand the incomparable verbal diarrhea of Mike Shannon.

Apparel is crucial for such an event. Nothing less than my home-white Cardinals jersey would suffice. Then, to get the kids dressed.

And of course, the group photo for the scrapbook. 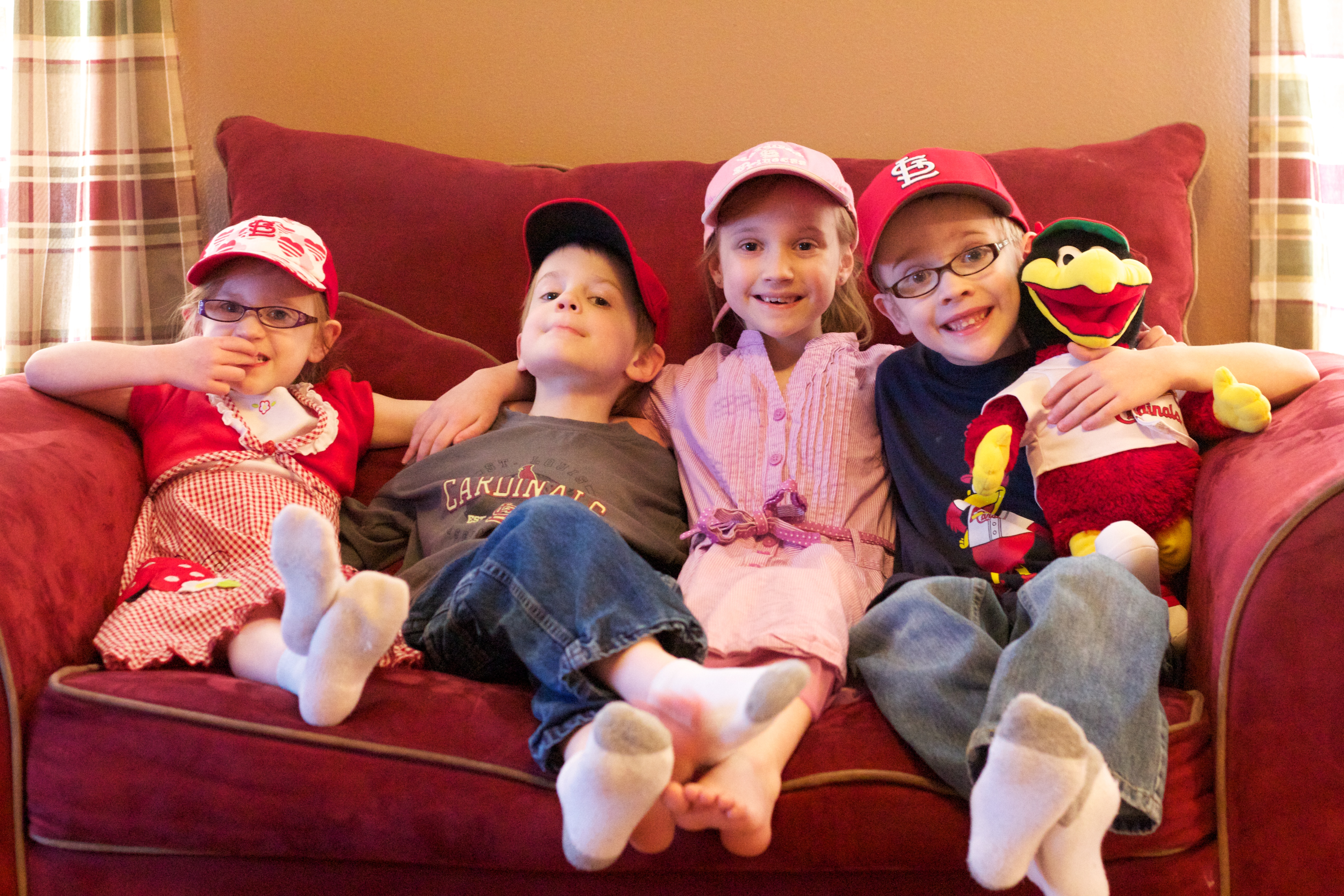 (One of these days, my eldest’s eyebrows are going to lift away from his head. Like Cap’n Crunch.)

HIS EYEBROWS ARE ON HIS HAT.

Errand running was necessary before the day’s frivolities were to commence, and while we were out I had an epiphany. The dinner schedule for the night called for leftover chili. This is not a bad thing, as it was my wife’s amazing three-meat (yes) chili, which is quite delicious and had been sitting in the refrigerator for a few days, taunting me with flavor.

However, I wanted to turn dinner into more of an event. There was a slight chance (embiggened by the fact that Opening Day games are usually slow-running) that the Cardinals would still be playing by the time we sat down to eat. The chili would not make it another day without being consigned to the trash, so what to do? How can we deal with the chili leftovers and connect dinner appropriately to Opening Day? 30 dollars and a trip into Wal-Mart for groceries later, I had my answer.

Think about it. What’s the quintessential ballpark food?

You said “hot dogs” in your mind, didn’t you? And now you have a hot dog in one hand, and a bowl of chili in the other. WHAT DO YOU DO?

You put your hands together.

(Then you add cheese, onions, and Fritos. And grab a fork. The bun never stood a chance.) 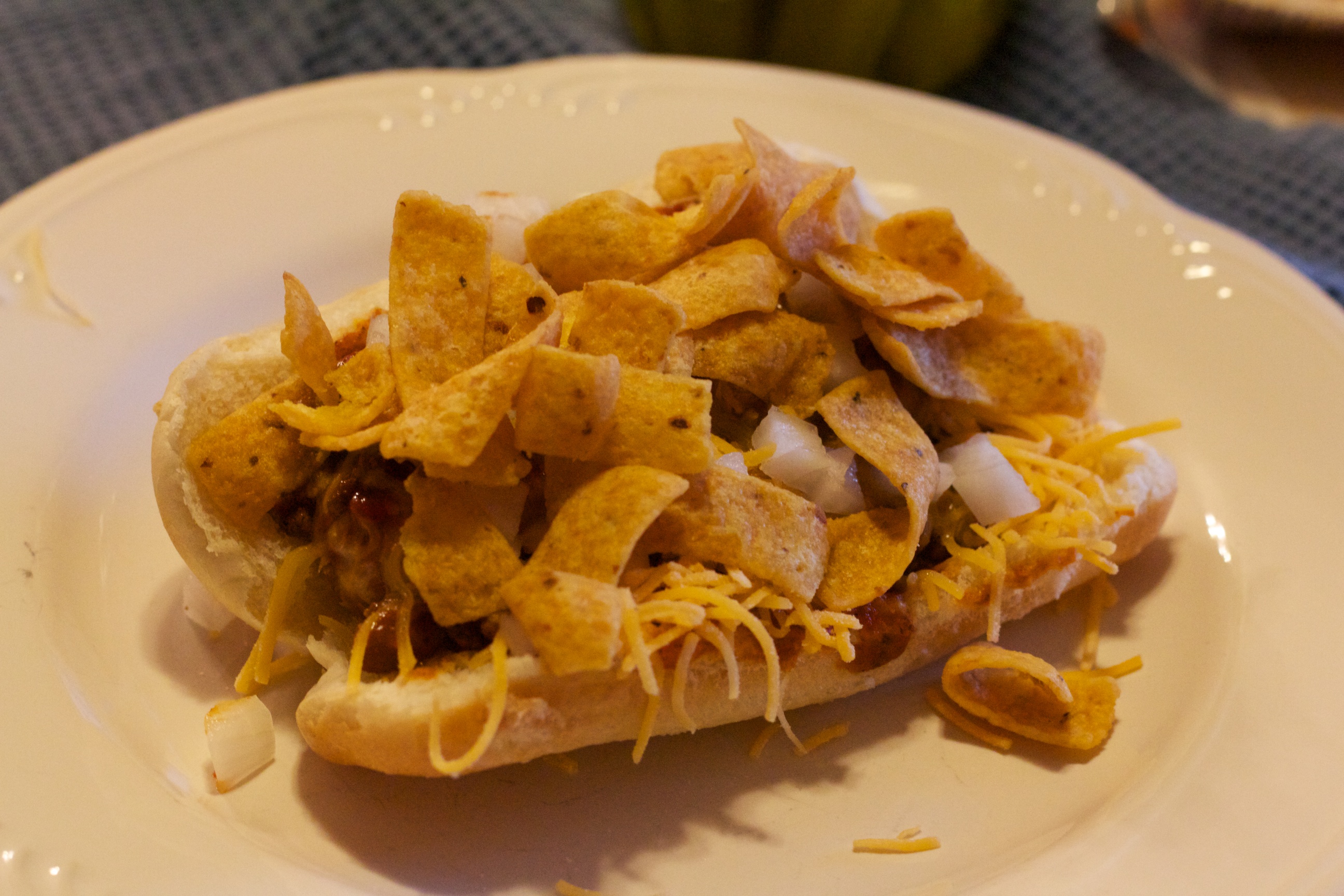 I also wanted to put together a little surprise for my wife, who grew up in suburban Chicago but is not, thank goodness, a Cubs fan. So for her, I gathered most of the ingredients for a Chicago-style hot dog. I do believe I pulled it off pretty well. 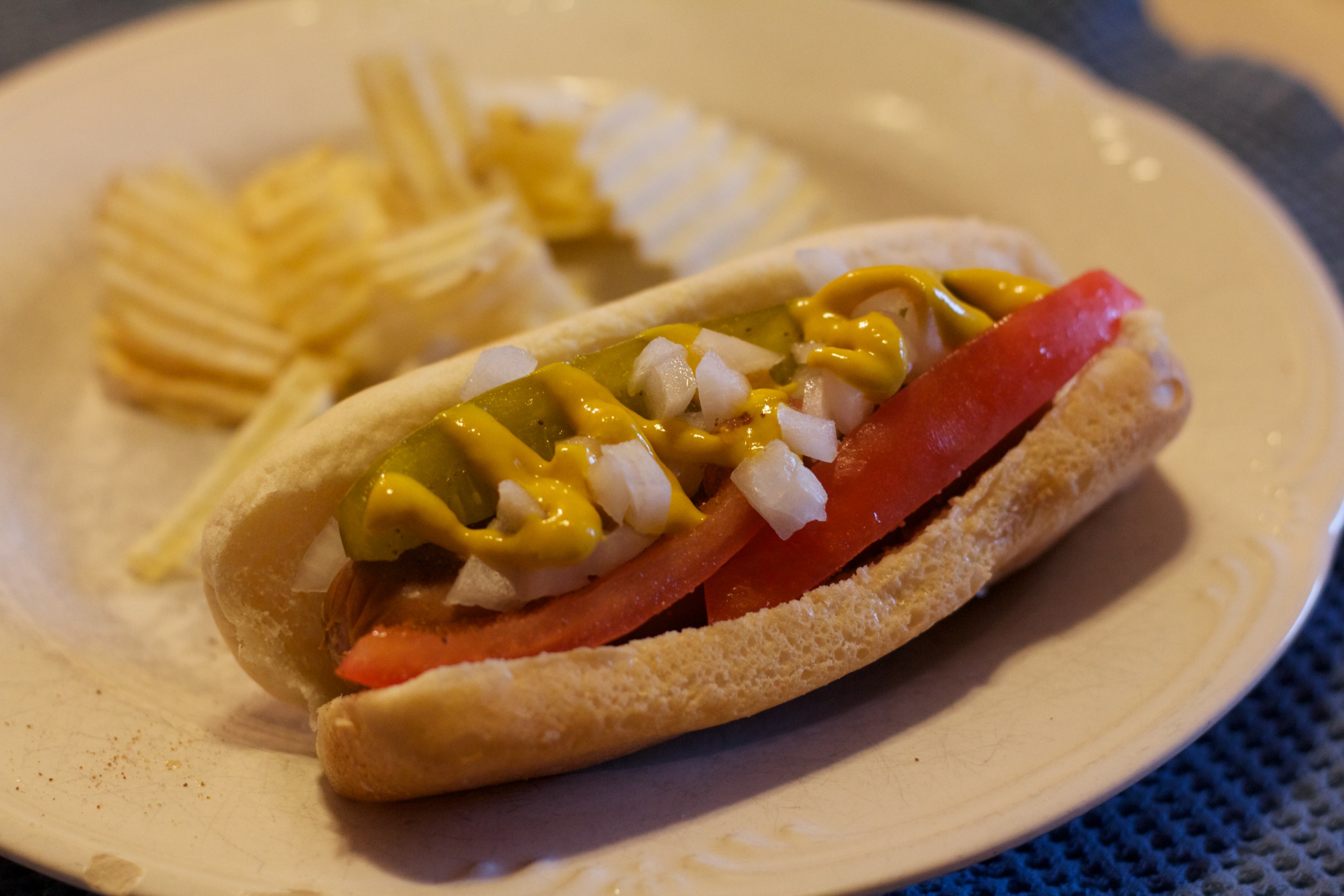 There are some details missing, because to my knowledge you can get neither neon-green relish nor poppyseed buns of the required shape in the St. Louis area. The basics are there, though: the hot dog is somewhere underneath all that, and there’s sliced tomato, diced raw onion, celery salt, and a dill pickle spear. And of course, it’s all topped with mustard. Never put ketchup on a hot dog.

The family had a mixture of hot dogs; two chili dogs, two Chicago-style, two normal-style (the little ones don’t like junked-up dogs), and some cups of chili around the table to finish. What to drink?

While in the grocery store, I briefly considered a six-pack of Budweiser to try and authentically complete the Busch Stadium feeling of the meal. Upon reflection I realized that would mean having to drink six Budweisers between the two of us, the thought of which I did not relish. So we went with some Blue Moon. You can’t get it at the ballpark, but whatever. 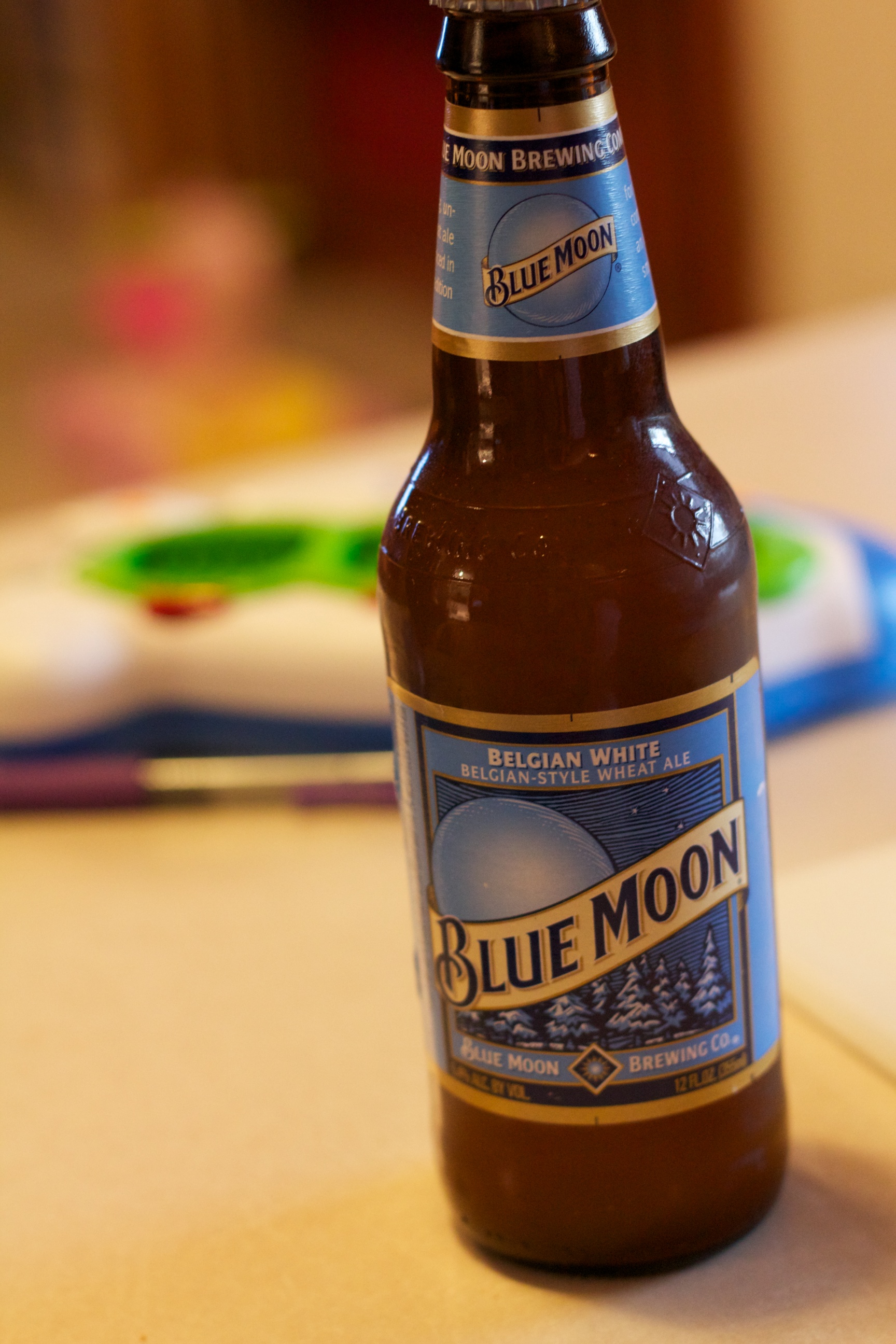 The children cannot partake of this beverage, so the Plan B for them was obvious: root beer! 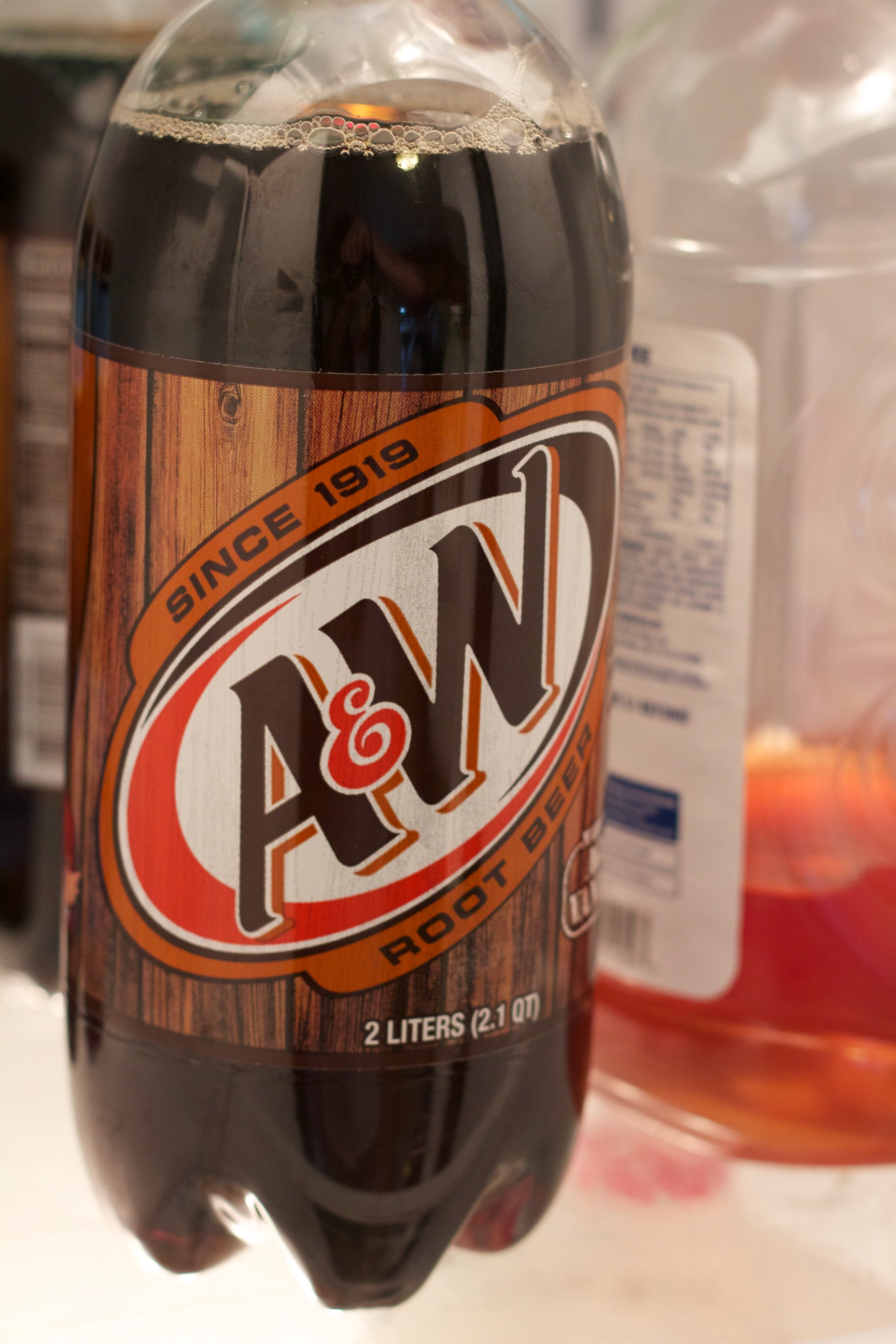 We are not yet done with the culinary experience, as the dessert selection has not been revealed. If you’ve been to the ballpark on a hot summer night, and it gets to about the eighth inning, there are normally two choices. One is incorrect. 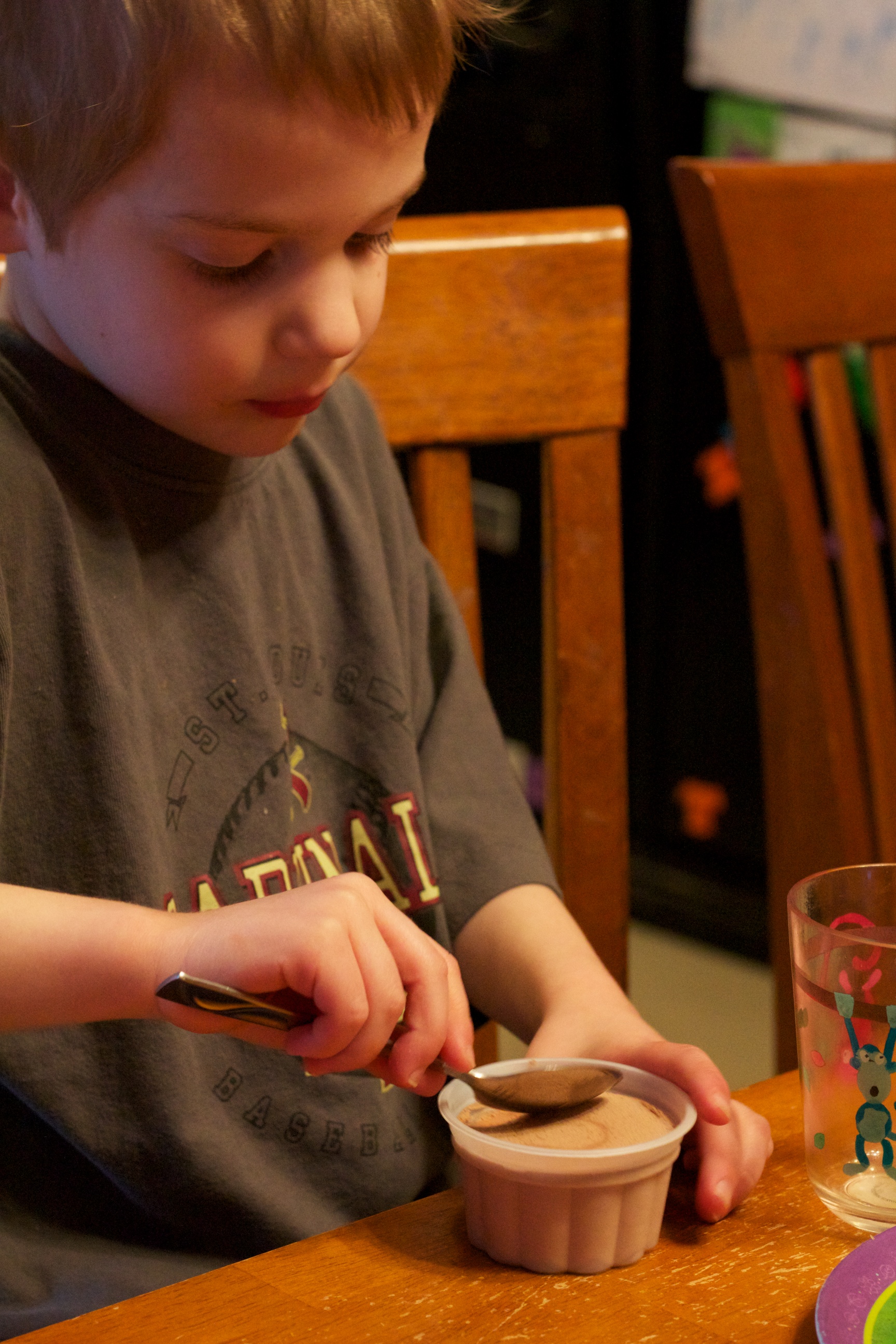 All agreed that it was quite the dinner, unfortunately to be followed by an extra-innings defeat for the first Cardinals game and the first home game of the season. As they say (most likely in Wrigleyville or in Queens or more recently in Baltimore), you can’t win ’em all.

But you can follow up by watching the ESPN Opening Day game with an added snack bonus.

After the kids were in bed, I went to work on the secondary creation of the day: authentically ridiculous ballpark nachos. Ballpark nachos have a personality and a presence all their own. First, you must find appropriately non-descript, inexplicably-textured, and brightly-colored nacho cheese. It must be barely identifiable as a dairy product.

Thankfully, I found exactly what I was looking for. This gourmet NACHO Cheddar Cheese Sauce is so gourmet that it comes in a can bearing a label created by a very over-eager designer. 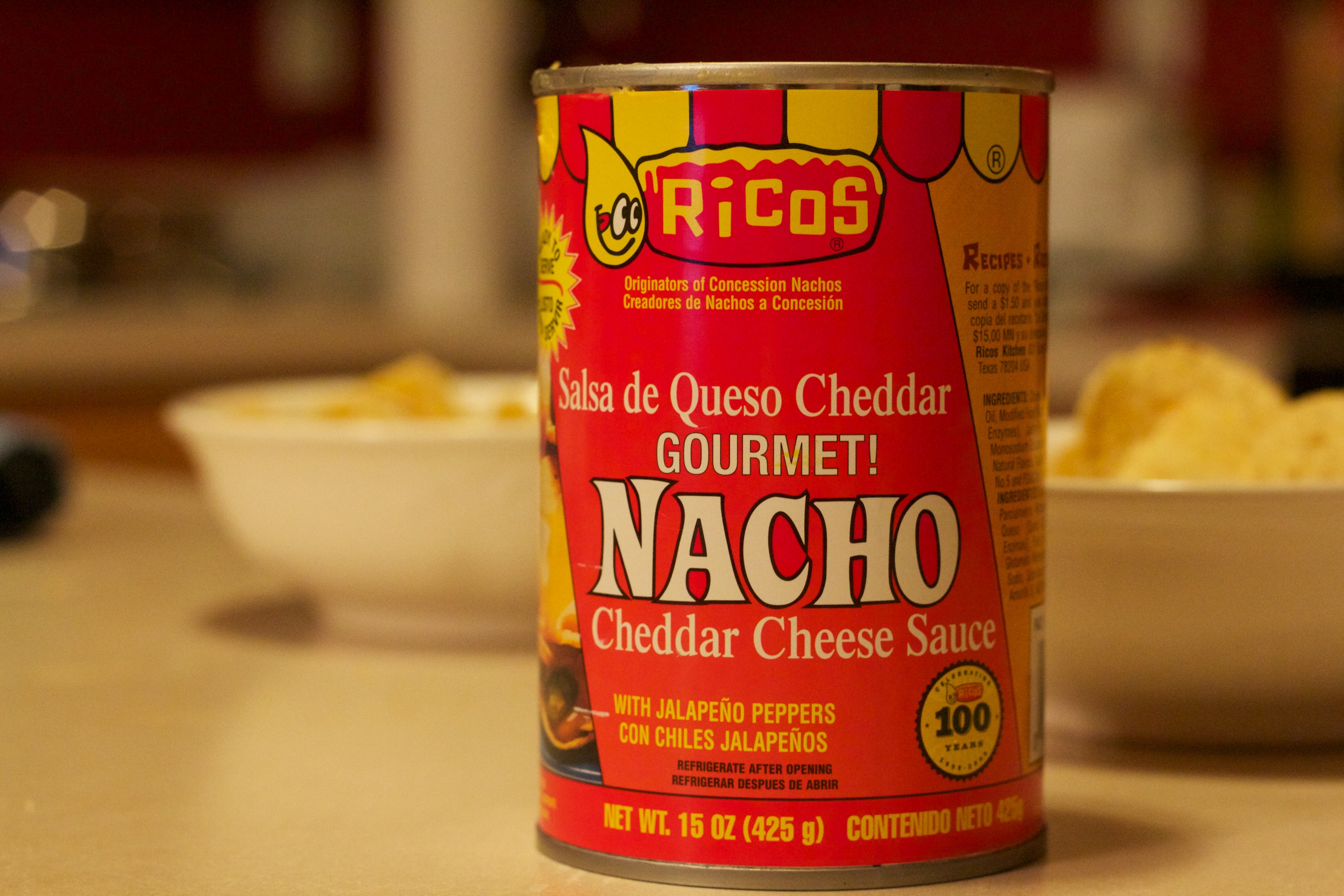 I make it a point to always trust in vaguely Mexican-like concession food made by guys named Rico. Just look at it—it even includes Spanish on the can.

The cheese is not the only important part. You must arrange the chips and the cheese in the holding vessel so that it is impossible to remove a chip without getting nacho cheese on your hand up to at least the first knuckle. The cheese is required to saturate some chips to the point where they meld with the cheese and you top chips with other chips. 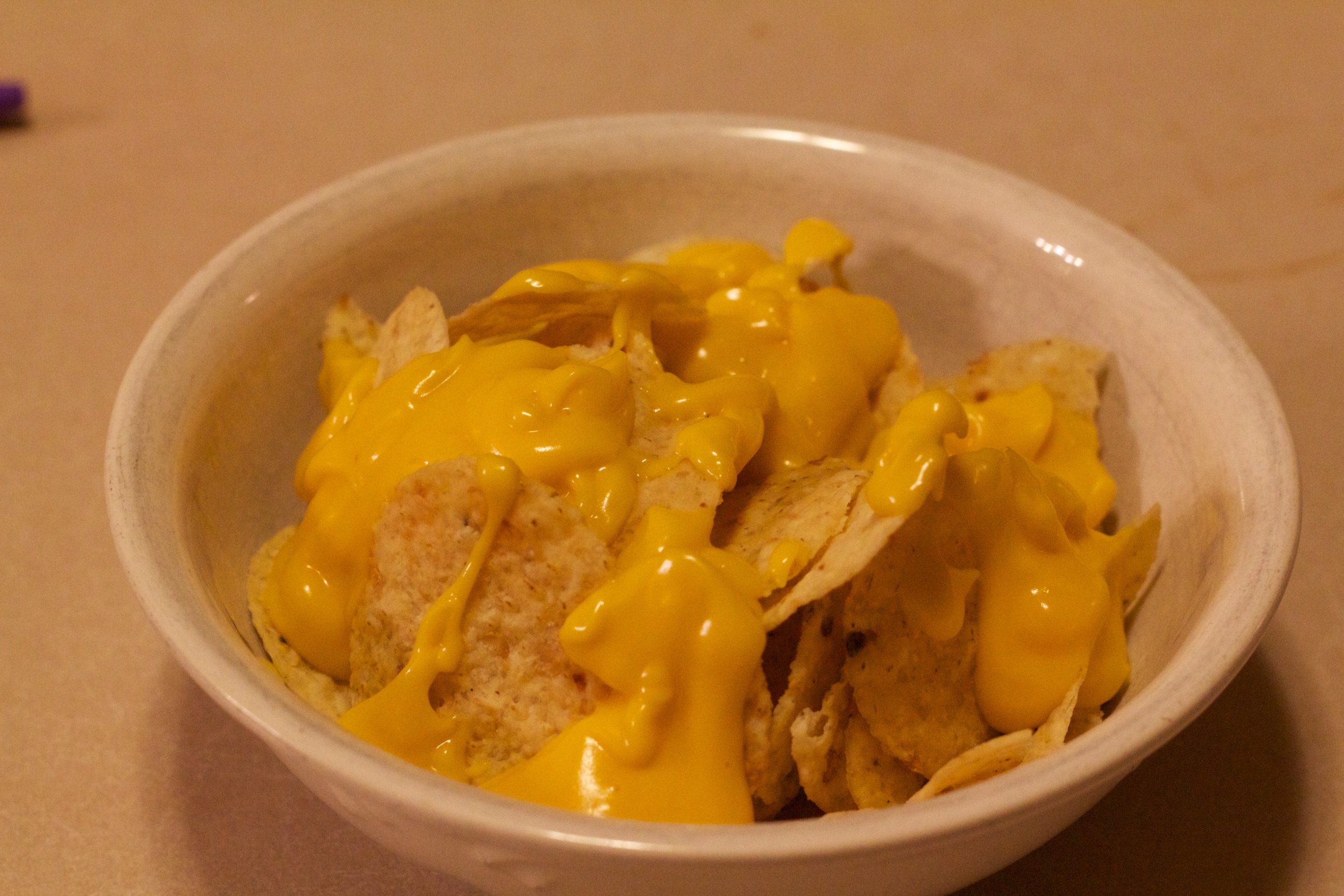 This completed our Opening Day food experience, and Amanda and I both agreed that it is a new tradition, born out of a crazy dad’s ideas that will now be repeated infinitely so long as we are alive, because—darn it—it’s Opening Day, and that means something.

Everyone had a great time, and I hope that you and your family likewise had a great time today celebrating Opening Day (or whatever day over this weekend is your team’s Opening Day). Even though this is designed for an indoor celebration with your family, take them out for a baseball game this season. Get into the open air (or closed dome, whatever), take in the experience of being together and joining the greater crowd, share the joy of the sport with each other, and get away from the trappings of life for a few hours.

In our sun-down perambulations, of late, through the outer parts of Brooklyn, we have observed several parties of youngsters playing “base”, a certain game of ball…Let us go forth awhile, and get better air in our lungs. Let us leave our close rooms…the game of ball is glorious.