This past Sunday I completed my second-ever journey to Europe, this time to the wonderful city of Vienna. I will tell you more about this trip and why I enjoyed it later. I will also post pictures for you later.

First, I will recount for you a transatlantic tale of woe. Though it has a happy ending, be assured that while it was happening I was very quickly reaching the end of my proverbial rope, and wasn’t sure whether I should collapse into a heap of pathetic crying or flip out and snap at the airport staff, security, or various others involved in my “experience” at Toronto Pearson.

At this point, I suppose I am fortunate that the TSA doesn’t exist in Canada. 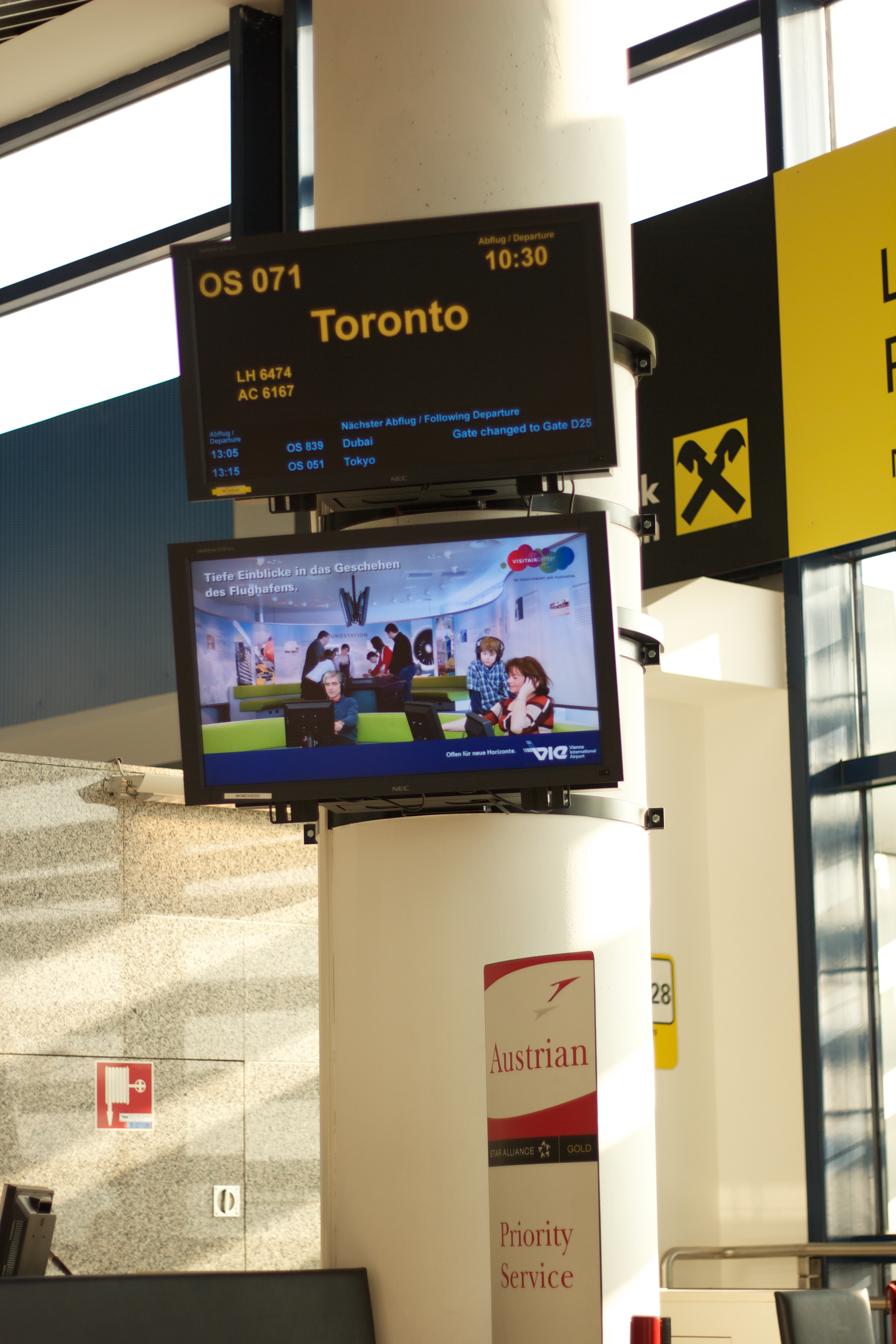 Our story begins with the most normal of flight problems—and one to which I am no stranger when trying to get home—the flight delay. I was of course very punctual in arriving to the airport in Vienna, along with my traveling companion for the day, Andrew. We got there in plenty of time, even with the somewhat odd experience of security being handled right at the flight gate rather than before entering the terminal.

Security was passed, we had seats in the gate area, and all that remained was to wait for the plane, which was already at the gate by the time we were admitted and was ready to accept willing passengers, fresh with the desire to return home.

At least, until the PA announcement that the plane had encountered a mechanical problem and needed to be replaced with a new airliner of a different model, necessitating that all passengers receive new seat assignments. After much wrangling and a lot of appreciated patience from the Austrian Airlines staff, we were on board and ready to go about an hour late.

The flight required the normal amount of time to get us to Toronto. This was OK as far as I knew, because I had successfully made a delayed one-hour layover on the way out to Vienna. I had two-and-a-half hours to clear everything in Toronto and claim my seat for the journey home to St. Louis. This was smooth sailing.

I had hoped to get at least some sleep on the flight to Toronto. This was not possible for reasons that comprised what I now call the Transatlantic Seat Trifecta:

As a kicker, be forewarned when booking a flight that Austrian Airlines planes apparently do not possess those awesome little nozzles of “air conditioning” that you find on most flights. It was extremely hot on board and there was no kind of relief available.

(This is not to say there were not bonuses to the flight. Beverage service was plentiful, allowing me to stay well-hydrated. The meals were actually pretty good. The staff was very friendly and did not laugh at me when I took a German newspaper even though I spoke English. And the quality of the hot tea was far superior to any other flight I have been on. In my experience, European airline companies provide a better level of service overall—even in economy-class—than any American-based carriers. But I digress.)

I arrived in Toronto and quickly made my way with Andrew to the connections area, where we stood in line for a very long time to get our boarding passes for our next flights. The whole time, I was watching the carousel for connecting luggage and noticed that mine was not on the belt. After I received my boarding pass, I had a moment of recall where I wondered if what happened to me the last time I had flown back home had happened again.

Checking my claim receipt for my checked bag, I saw that it had. My bag had been checked to Toronto, not to St. Louis. I asked an Air Canada rep to make sure my suspicions were correct, and they were: I now had to exit the connections area, go down to baggage claim, find my bag, then go back through security to get onto my flight. I did so, but needed to fill out a Canadian customs form before I could make the transfer. I did this, went to customs where the agent wondered what the hell I was doing in that line versus the connecting flights line, and then made it out to grab my bag.

I then entered an inordinately long line to get out of the baggage claim area (where they actually check and collect your customs form) and then made it back out into the entrance area. Spying what I thought was the correct line, I made a dash for it and then was stopped by an Air Canada representative before making it what I thought was free and clear. I had entered the area for connecting flights to Canada, she said. I needed to go back out, go up two floors, and make it through Departures in order to get to the US. 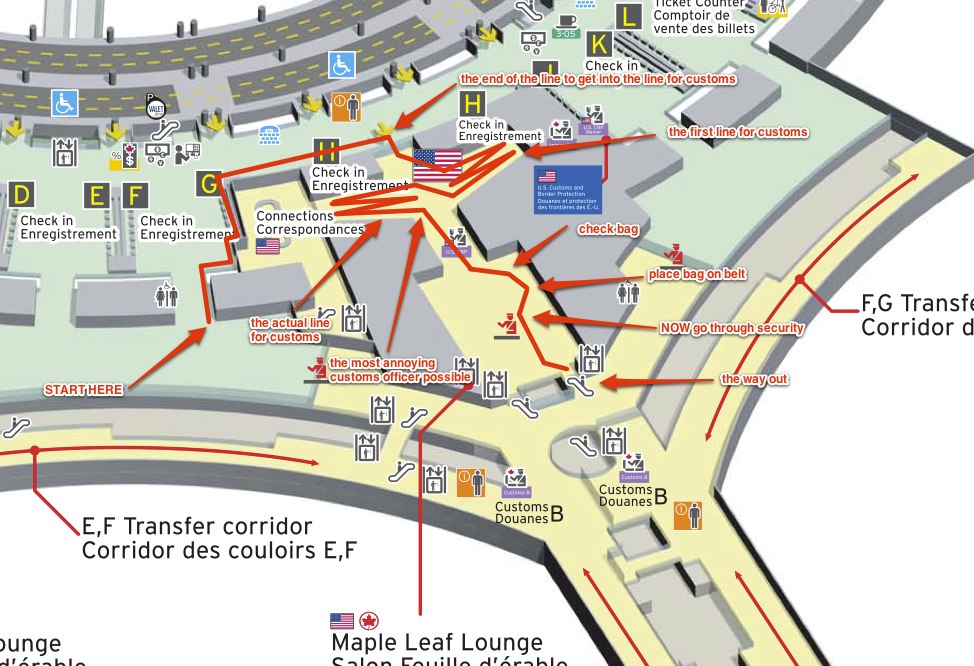 After begging and pleading with as many staff as I could muster, I found my way to the customs desk, only to face someone who was determined to use his steely eyes to gaze into my soul and determine what kind of terrorist threat a guy coming back to the US from Austria could pose. After all, I was claiming on my customs form a chocolate cake (very happy I didn’t write “Sachertorte” in that space), a stuffed bear, and two board games. I was asked many questions, but he paused for a great long while when I explained to him what I did and who I worked for. It went like this:

“So you work for a place doing internet stuff?”

“Where’s the company based?”

“And where do you live?”

“So you work for a company in San Francisco, but you live in St. Louis. That’s very interesting. And what were you doing in Vienna?”

“Getting together with friends.”

“And where are these friends from, hmm?”

Just imagine that going on for about five minutes and you’ll be about where I was. As I left, the officer told me that I might expect to be stuck in Toronto for a night.

I wasn’t about to give him that pleasure.

Thankfully, security was a bit of a non-issue, though I realized they hadn’t checked my bag through yet and was worried that it would have to meet me later. There were a couple of very nice Air Canada agents who were willing to go right up to the deadline and get my bag checked, and then hustle me to the front of the security line.

I made it through security without incident, and went down the escalator to face the second part of my Toronto hell, which is also accompanied by a map:

My flight was at gate 132. As I went down the escalator, I saw a sign that said “Gates 132-157” and had an arrow pointing me in the proper direction. I was very happy at this and counted myself fortunate as only about five minutes remained until I could no longer board the plane.

This was about when I rounded the corner to see Gate 157.

To bring a long story to its conclusion, if you had been at Gates 151 through 157 that day, you would have seen a very large man tearing through the terminal, determined not to stay another night apart from his home and his family. Had you been at Gate 132, you would have seen a very out-of-breath large man stumble up to the gate counter, have his boarding pass and passport scanned, and lumber down the jet bridge to collapse into his seat.

And had you been on the flight, you would have seen the face of someone who, upon realizing the flight was over twenty minutes behind schedule, was silently cursing Toronto Pearson International Airport for not updating their departure boards properly while at the same time anxiously waiting for the wheels to go up so he could finally, finally know that he was going to make it home that night.

To put a happy spin on everything, both I and my luggage made it home safely, and I was welcomed by my wife and children, including two “welcome home” cards hand-made by the oldest two. Smiles were to be had all around, and I contentedly prepared myself for a good night’s sleep to help in recovering from the time adjustment. Things were good.

Until the tornado sirens went off in the very late evening, and we evacuated to the basement. But that’s another story.