My new TV arrives tomorrow. I sketched this out last week. 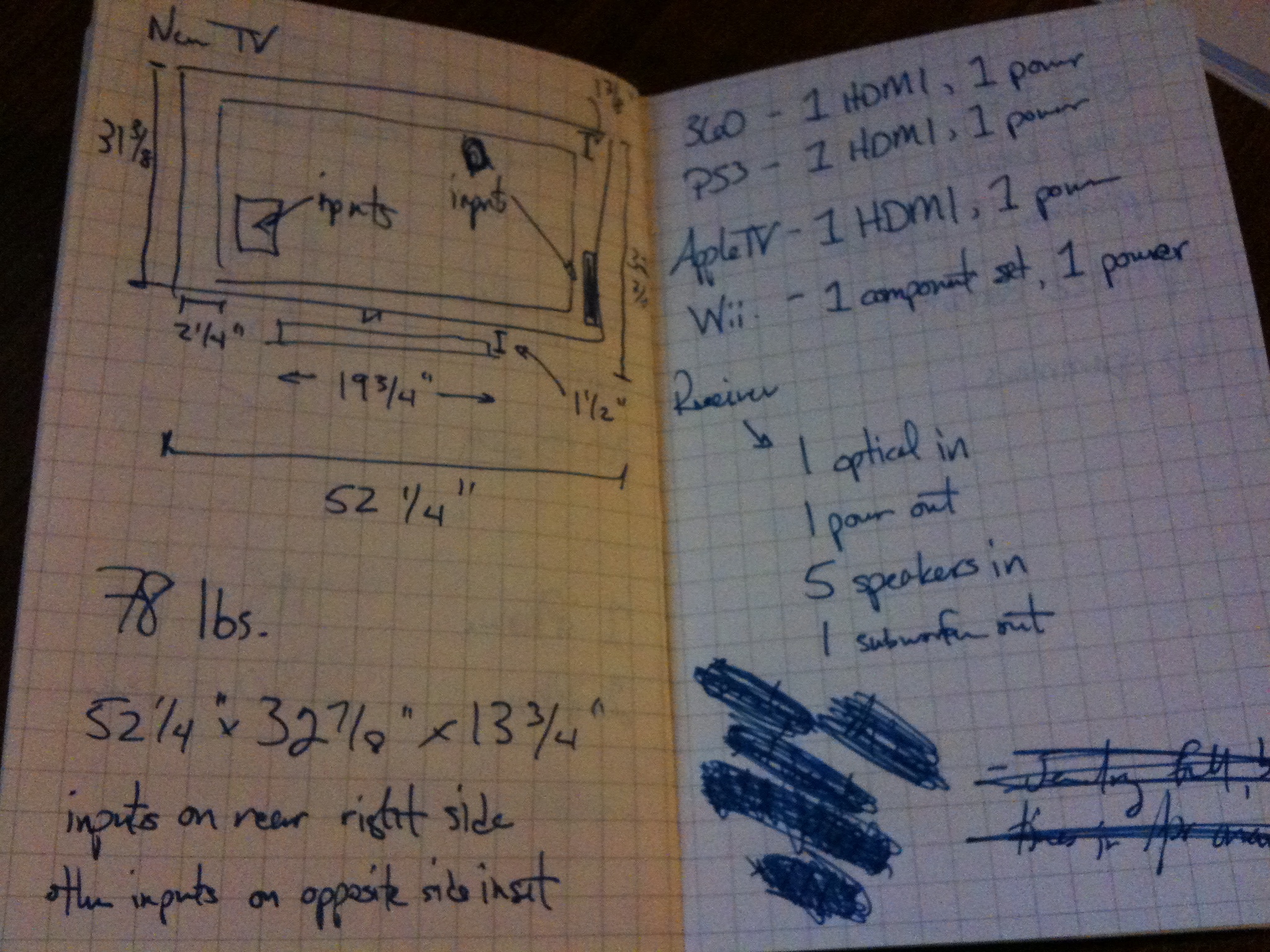 Yesterday was my 30th birthday.

To say that it was an exciting and momentous occasion in my life would be somewhat of an understatement. My birthday was like a carefully focused cone of chaos and change. I had a nice dinner with my family and best friend, received some amazingly thoughtful gifts, ate the delicious cake you see in the picture above, and put into motion some really amazng things.

It also gave me some time to think and to set some internal goals for myself for the next year. I don’t necessarily like New Year’s resolutions, but rather think my birthday is a good occasion for considering where I am, what I’m doing now, and what I’d like to be doing the next time I celebrate another year of life.

Here’s some of the stuff I’d like to do over the next twelve months. (Some are more trivial than others.)

I haven’t been happy with my health for some time, and it’s time I did something about it and stuck to it. Over the last three months or so, I let a plan that I had already put in motion slip and disappear from my personal schedule, and now I have very regrettably watched my weight push back even higher than it was before.

I don’t want to dwell on the negative, but it’s frustrating and embarrassing. It irritates me that I have somehow let this one thing defeat me in a way.

So my goal is to get that under control, and to do it with simple, sensible measures. Less eating and eating at weird times, and more activity, both on my own and with my family. I’m sure I’ll talk more about this over the year.

Those of you who know me professionally and may know me closely personally know that I have always wanted to learn more about coding, but have never been able to push past the basics or to involve myself on a deeper level with a programming project. More and more of my professional life now involves working with applications.

I also have learned a lot more about open source in the last year than ever before in my life. I’m a true believer in the power and the freedom that come with open source software and in the communities that form around them. (WordPress is of course a prime example for me.)

So the goal before I turn 31 is to work on my coding knowledge and skills to the point where I am able to submit at least one accepted commit to an open source project. Maybe it won’t even be some PHP. Maybe it ends up being some style or a small tweak to something else. But I’ve been using open source software for so many years and feel the time for me to give back has come.

I have a huge basement. It’s full of boxes.

I also need an office in my home—a technological hermit cave.

The goal is to finish at least one room in my basement before this time next year, slap a desk and a way to listen to music in it, and sit down for a day’s worth of work in my new home office.

I believe you learn more about people when you play a game with them than at any other time. You can watch them deconstruct the rules, find a strategy, and learn how to out-think each other. We used to play games relatively often in our home, and I’ve let that go away too easily. It’s a good way to learn more about my children and to teach them critical thinking skills, and a great way for me to spend time with my wife. It’s also a great way to interact with our friends and family.

So I’d like to play a game—no matter how simple—with each of my family members at least once a week.

(And on the video game front, I have a backlog longer than you would believe. I should work on clearing some of my “pile of shame.”)

I don’t write as much as I used to, which is a shame because writing is something I love and something I can always become better at.

It’s also how my friends and family keep up with what I am doing and what I think. Sometimes they go too far between updates. :)

The goal here is to simply write more often. It doesn’t have to be more words, and it doesn’t have to be something horribly insightful or profound, but I just want to practice the craft of writing through repetition. I don’t want to set a goal for this, because I think quota-writing defeats the point, but I want to make a determined point to sit down and deliberately write more often.

(It pains me slightly to say this, but I’d also like to learn—gulp—Dvorak typing.)

I’m sure some of these things will be easier than others, and some are simply more involved or ambitious.

But on the day I turned 30, a few things changed. I sat down and thought about it. And this is where I landed.

Thanks for all your support and your birthday wishes yesterday. This will be one interesting year.