In my previous post today, I talked about how I’d seen some network performance issues with my wireless connections. I wanted to bring that up in more detail and show the problems I’ve had with my home networking.

In the end, if you like playing games online or do anything similarly latency-dependent, you should have anything you play on connected with wires as far as I’m concerned. Let’s take a look.

I have three basic connection nodes in my home:

The Asus router is the “Dark Knight” of internet fame. I’ve been largely happy with it since I bought it, but in recent days, I’ve seen some bad performance out of it in some applications. I tried to wire as much as I could through it and only use wireless if I had to.

The router supports 802.11ac, and so does one of my laptops. The throughput on it is amazing; I can get my full internet connection speed through wifi on it, which is about 105 mbps. BUT:

Whoa, what? That’s a pretty big range there, and the standard deviation for the connection is nuts. That’s from about five feet away from the router in its new location on the main floor of my house.

I wondered if it was just the transport, so I tried a different 5 GHz connection.

Here’s a result from the Netgear dual-band router I have in WAP mode in the other room (still on the main floor) of my house. This is from across the house itself, almost all the way on the diagonal:

Apparently, You Can Stop the Signal

At this point, I’m pretty sure it’s an interference problem. I’m seeing it on two different bits of hardware, using two different protocols. And using an old wireless bridge I have upstairs, this is what I see for the neigborhood when I run a check for networks: 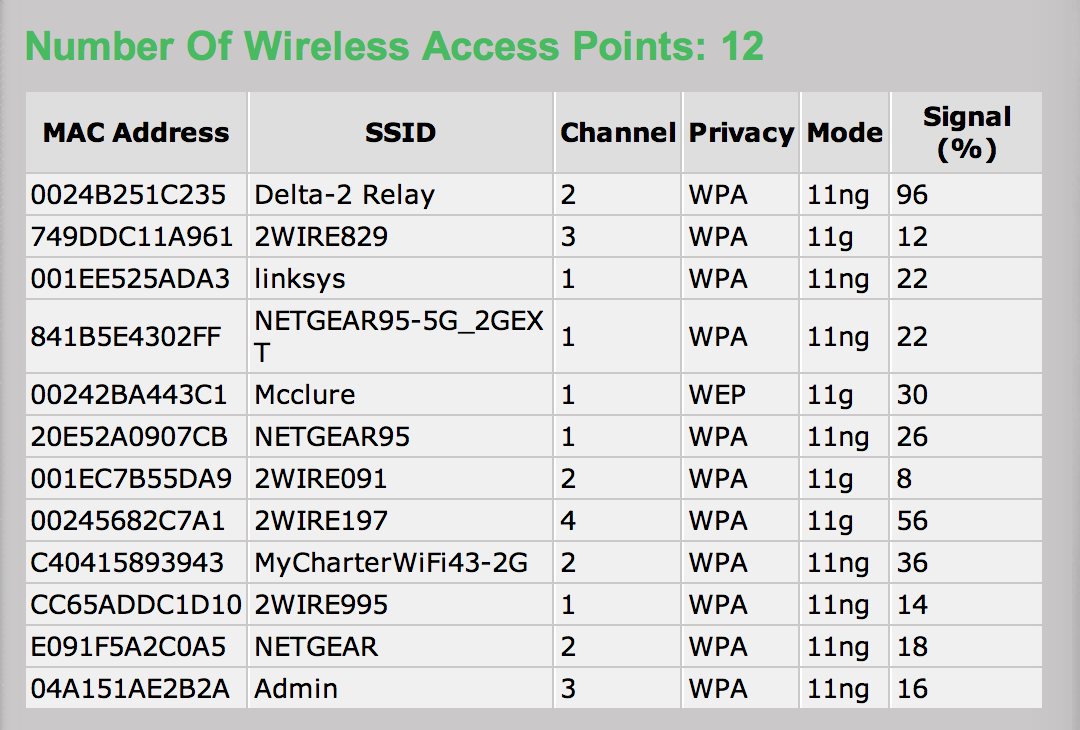 On the main floor of the house, or checking with one of my laptops, it’s even worse. I can find something like two dozen access points if I try. Looks like some people on U-Verse have newer 2-Wire gateways than others, and Charter has people on 802.11n gateways, which isn’t a bad thing, but wireless access points are everywhere now.

And I’m in a pretty medium-density subdivision. I have no idea what it must be like in an urban area.

At least I’m not seeing packet loss. But I know I can do one better.

When in Doubt, Run Copper

From the same laptop that served up the first score, and using the same 802.11ac router, I ran a connection test using the Apple USB gigabit ethernet adapter. Look what we have here:

Low, consistent, stable. That standard deviation is more along the lines of what I would want if I were doing anything latency-dependent.

I’m happy that my decision to wire the house ended up being the smart choice. I’m going to mess with wireless channels and other things to try and get some better performance out of this, but with a wired connection, I get the best of everything:

As mentioned above, if you plan on playing games on the internet, try as best you can to have a wired connection for doing so. I have a feeling you’ll be much happier with the results.

And if you have any ideas or suggestions for what I could do to increase wireless performance, by all means, leave me a comment or a pingback. (And you can find the raw ping data I got for the tests listed above in this gist.)

It feels a bit like I’ve stepped back in time this week as I have some new home/office stuff coming in that in some ways is a bit of a throwback.

Yesterday was part one, when I installed a wired gateway for my home internet connection.

That’s right; the hardware that connects my home to the internet and does all the router-y things for all the devices I have doesn’t have wireless antennae anymore. It’s wired-only. I got tired of wondering if the “outages” I was experiencing were my wireless connection, the router itself, or the internet connection, so I decided to uncouple some of the factors involved there.

The model router I picked up is the TP-Link TL-R600VPN. It’s a super-simple piece of hardware and so far I’m pretty happy with it. Pretty basic controls, no-nonsense setup, and no limits on reserved DHCP addresses – which is pretty good, because right now that list looks like this and I’ve only set up half the devices in the house: 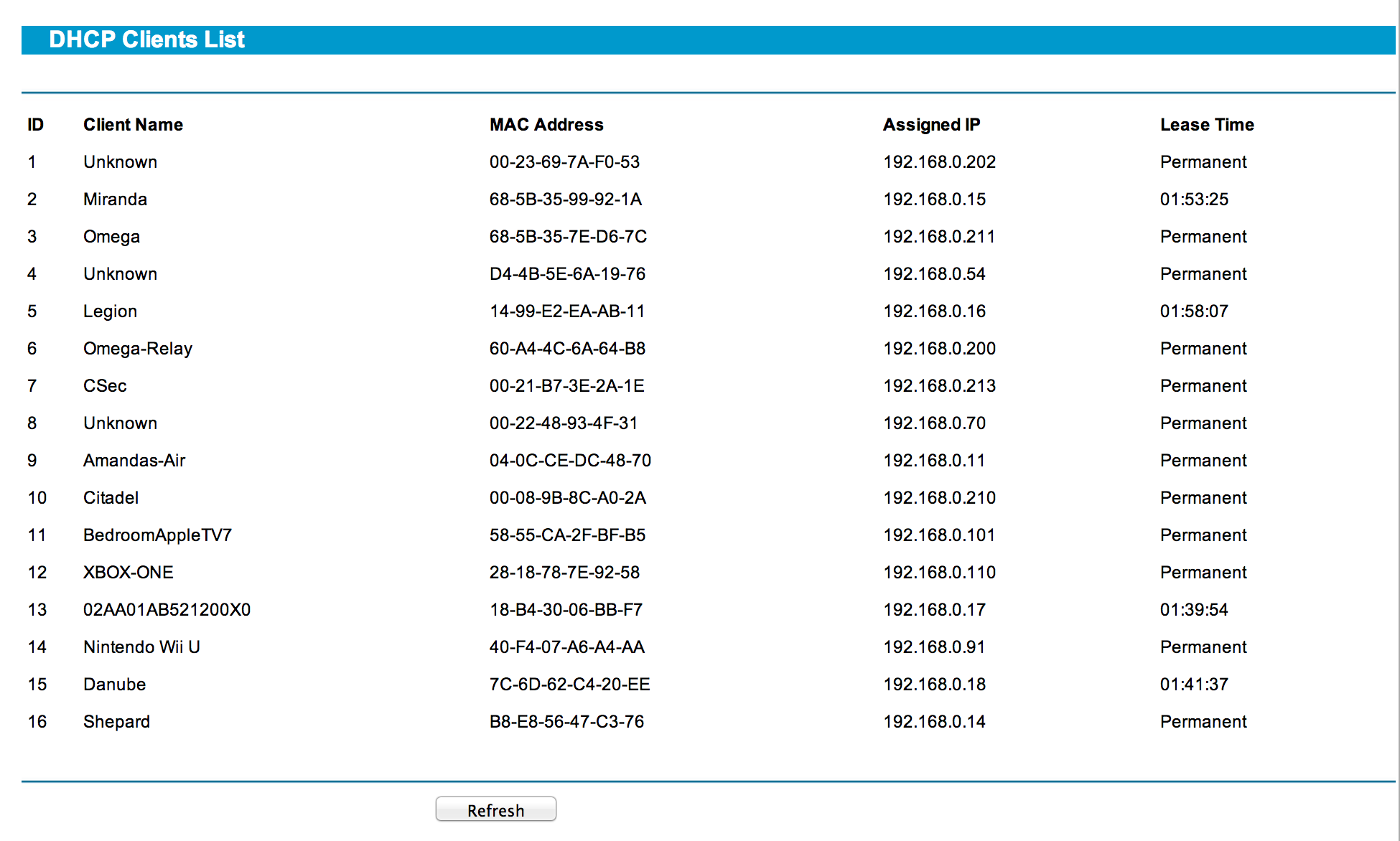 It’s only been about a half-day, but already I feel like things are more stable and performance seems better. I ran some numbers on the internet connection that lead me to believe that my router is at fault, and if that’s the case, then I’m kind of disappointed. I’ll talk more about those numbers later today – and tell you why you should do what you can to make sure your home is wired for ethernet.