In Street Fighter IV, you earned costume colors for each character on the roster simply by playing matches. Once you played a certain number of matches, you would unlock a new color and then you could select that color at any time. It was easy, it was unobtrusive (other than the notices that you had unlocked stuff), and it was quick. You got all of the colors for your main character almost immediately.

Street Fighter V doesn’t work that way. I doubt you have missed out on this, but:

There is a higher level of difficulty, but it doesn’t grant a color; it gives you some XP, some Fight Money, and a title that AFAIK is universal (not per-character). 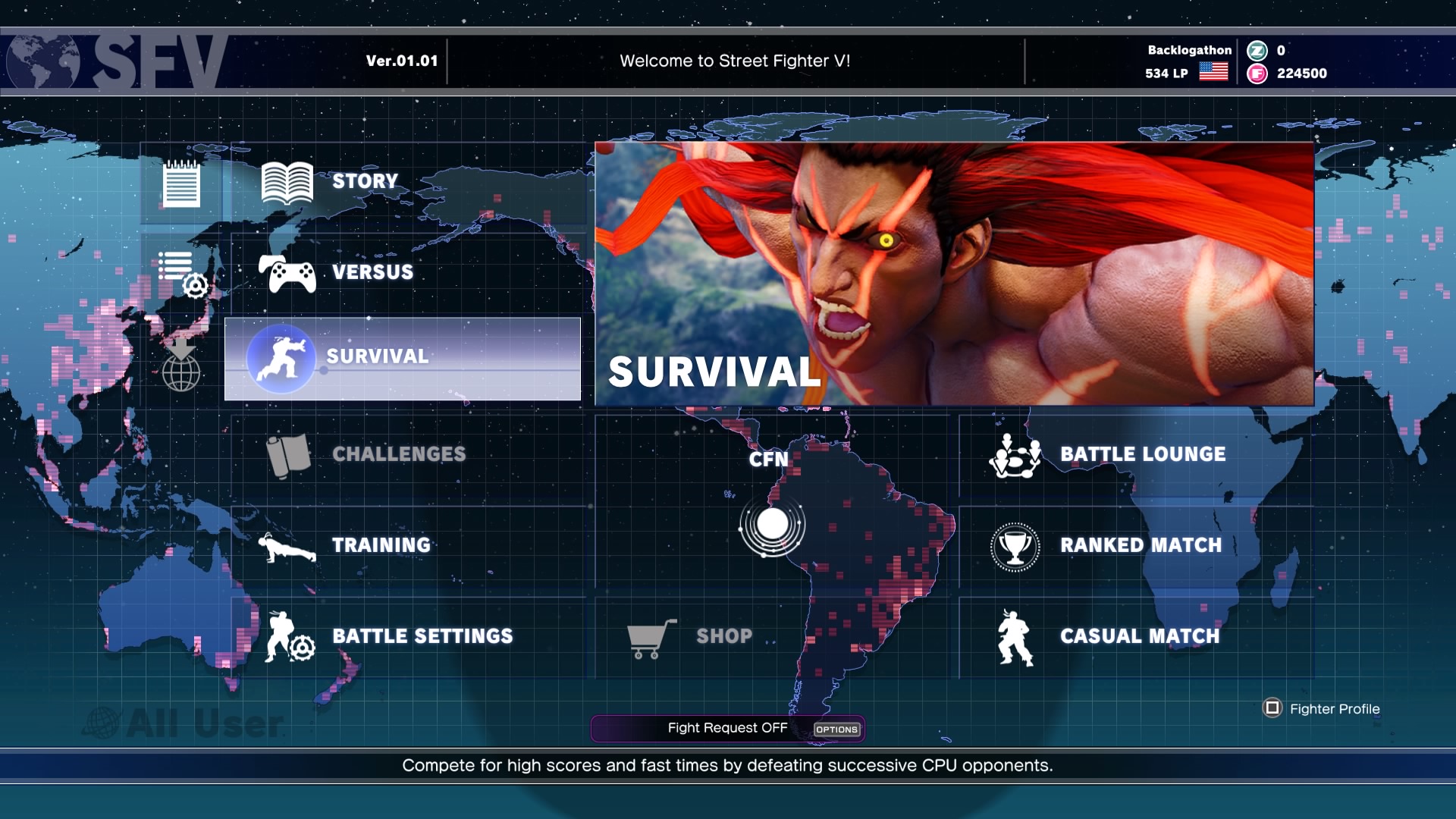 Here are the surface annoyances with this method (I’m going to talk about the horrid design of this mode and unlock method in a bit):

We are just getting started.

It’s annoying enough already, because this is a mode that most people probably wouldn’t have touched at all if the colors weren’t gated behind it. Survival mode (with the exception of gimmick modes like Tekken Force) is always the most garbage single-player mode in every fighting game in existence. And it’s a tragedy of design that this mode is what holds people back from costume customization in the latest Street Fighter installment.

LET’S TALK ABOUT WHY, SHALL WE? 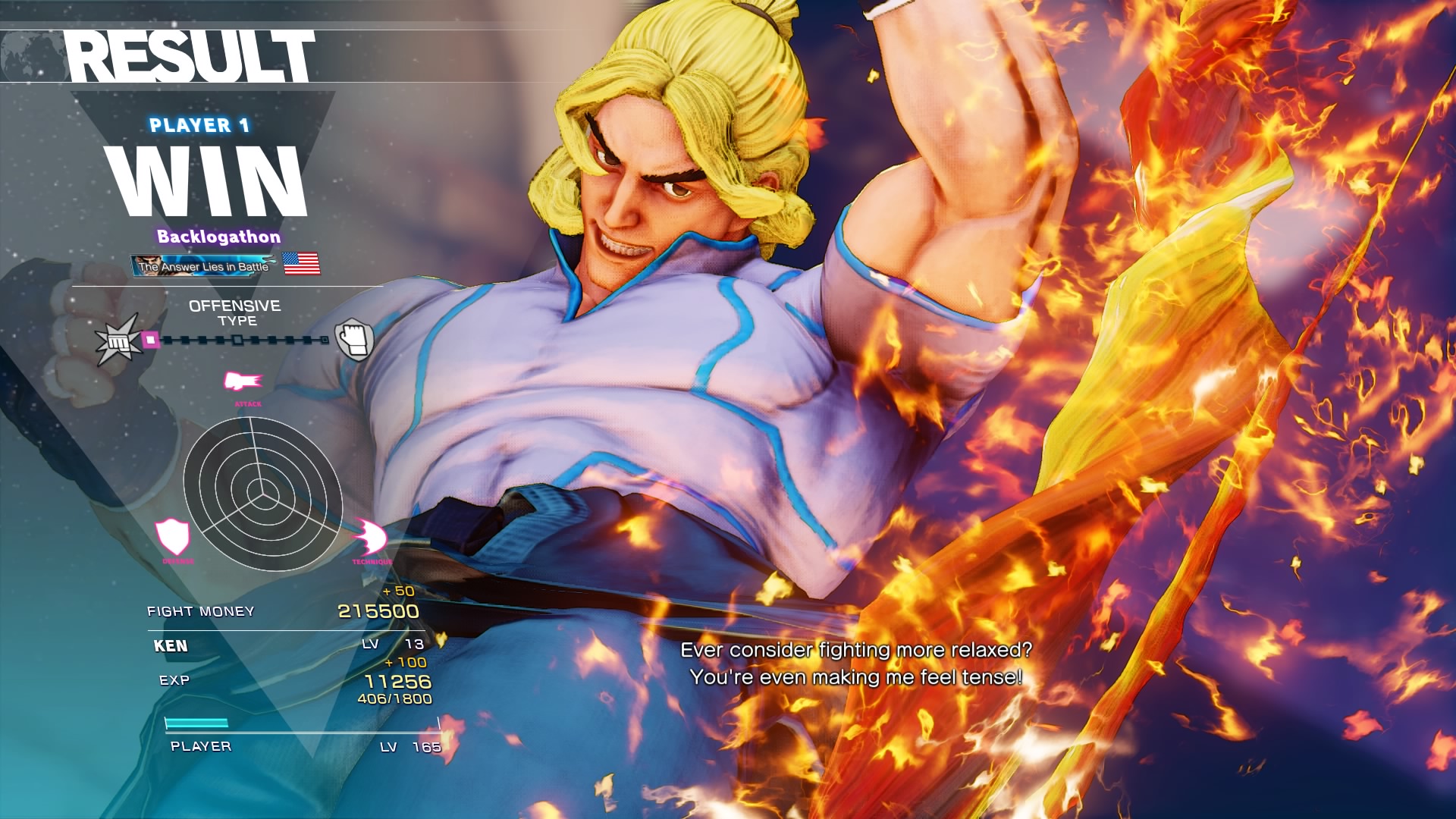 (Whatever, that’s not from Survival, but it is from the match where I broke into Bronze tier this afternoon, so roll with it. I’m a Ken player now, apparently.)

(Also we will chat about the stupid “favorite character” and Ranked play thing later.)

Anayway, back to Survival mode and why it’s bad design.

After three tries, I cleared Normal with Ken tonight and unlocked three more colors. The first two runs I did, I would do pretty well all the way up to about fight 26, when the CPU decides it’s going to do things like string more than one hit together and actually use EX moves (or any special, for that matter).

29 is against Necalli and can be pretty brutal, because that’s the fight where the CPU decides it will start trying to counter things sometimes.

30 is Bison and he will try to rip off some pretty brutal 30-40% combos when given the chance. Every time I would try to play against him straight, nothing would work. Every throw I would attempt would be teched. Every good strike I thought I could get in—and previously worked against other opponents—would get countered or even crush countered.

So how did I finally win the mode?

I would spam SRK until it hit, then forward dash to push the CPU as far as possible, then spam SRK on wakeup, then dash the CPU into the corner, then just spam SRK forever until dizzy, combo, KO.

Survival mode doesn’t teach anyone one of the most important aspects of any fighting game: adaptation. Because the AI largely doesn’t put up a fight and even then can often get crushed with special move spam, players who go through the gauntlet are not learning anything.

They are just grinding.

It’s not effective, and it’s not fun. At least in SFIV, when you were trying to earn costumes, if you chose to grind it out with dummy opponents in Versus mode, that was your choice. But you could also grind it out by playing against other humans, which would teach you infinitely better than survival mode.

At the end of each (one round, mind you) fight in Survival mode, you get a results screen that shows you the time it took for you to win the round as well as the number of points you have earned: 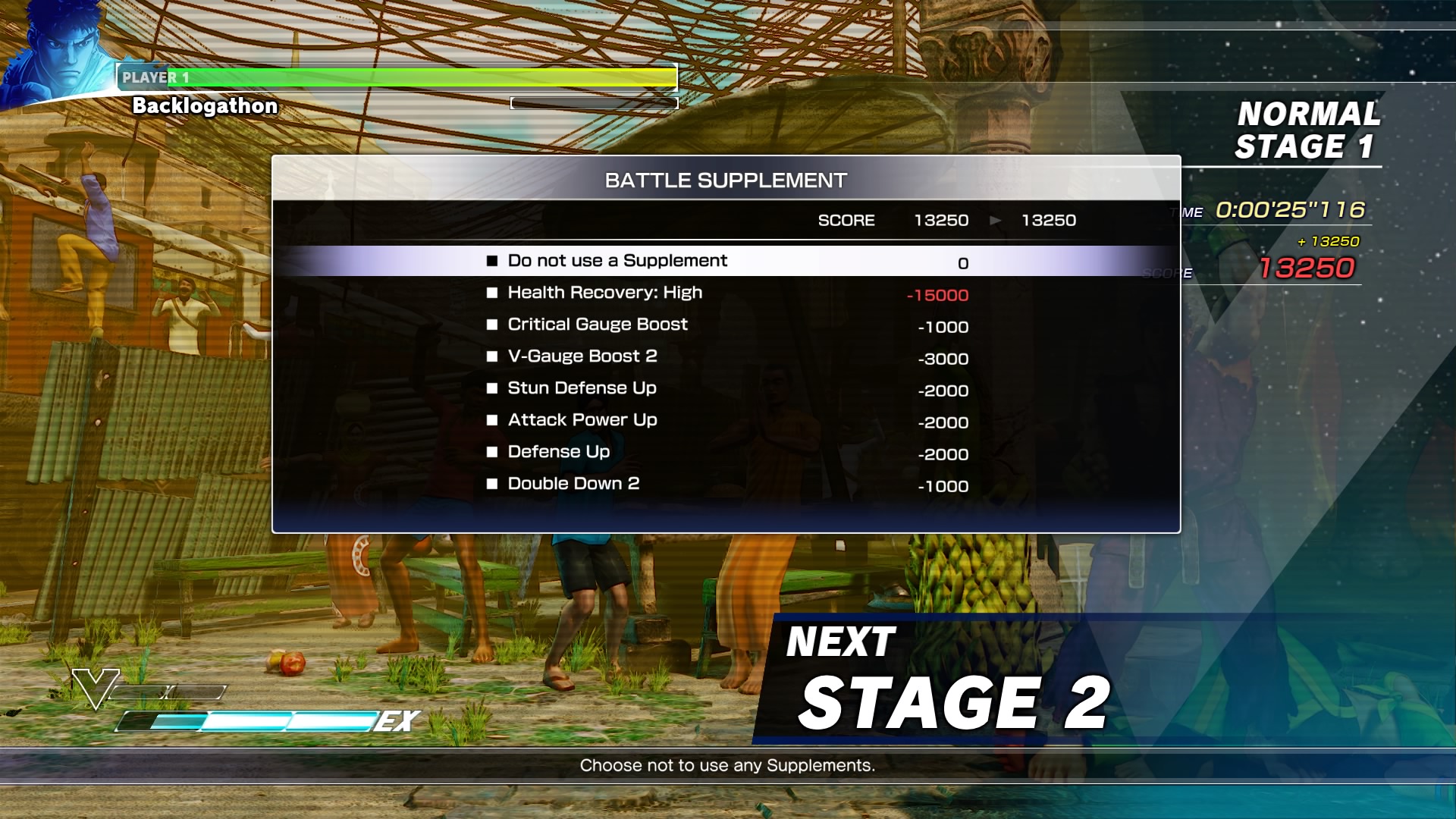 The number of points is determined by your character’s remaining vitality at the end of the round. A perfect round scores 15,000 points and the scale appears to be linear.

The points are used to purchase “Battle Supplements,” for the next match, which are like upgrades for your character that change the following match. You can choose either none of them or one of them. They expire at the end of the next stage, and you cannot stack them in any way.

In addition, your health and critical gauges persist from one stage to another. (V-gauge does not.) You can “bank” meter for the next stage if you want, and any damage you take during a stage carries over to the next. Because of this, you are incentivized to spend your score on refilling your health meter to try and make it through the next stage (if you need it).

Vitality is a resource in fighting games. It is designed to be “spent” during a match to gain advantage in some cases.

Because your health carries over from stage to stage, you are actively discouraged from thinking of it as a resource during any given round. This is counter-productive to teaching players how they should be approaching Street Fighter and fighting games in general and when they decide to attend a tournament or hop into ranked matches it is just going to discourage them.

Instead, as I mentioned, you are rewarded for staying as close to a perfect victory as possible, so you will have enough points to spend on refilling your vitality between stages towards the end of the progression—and those spends can get expensive. Which leads us to the last big problem here…

Let’s take a look at that screenshot from the last section again, shall we?

Nice store, there. Too bad that if I had taken a lot of damage, I would not have been able to refill it because I can’t afford the health recovery upgrade. But let’s take a look at the same post-stage screen from later in the progression: 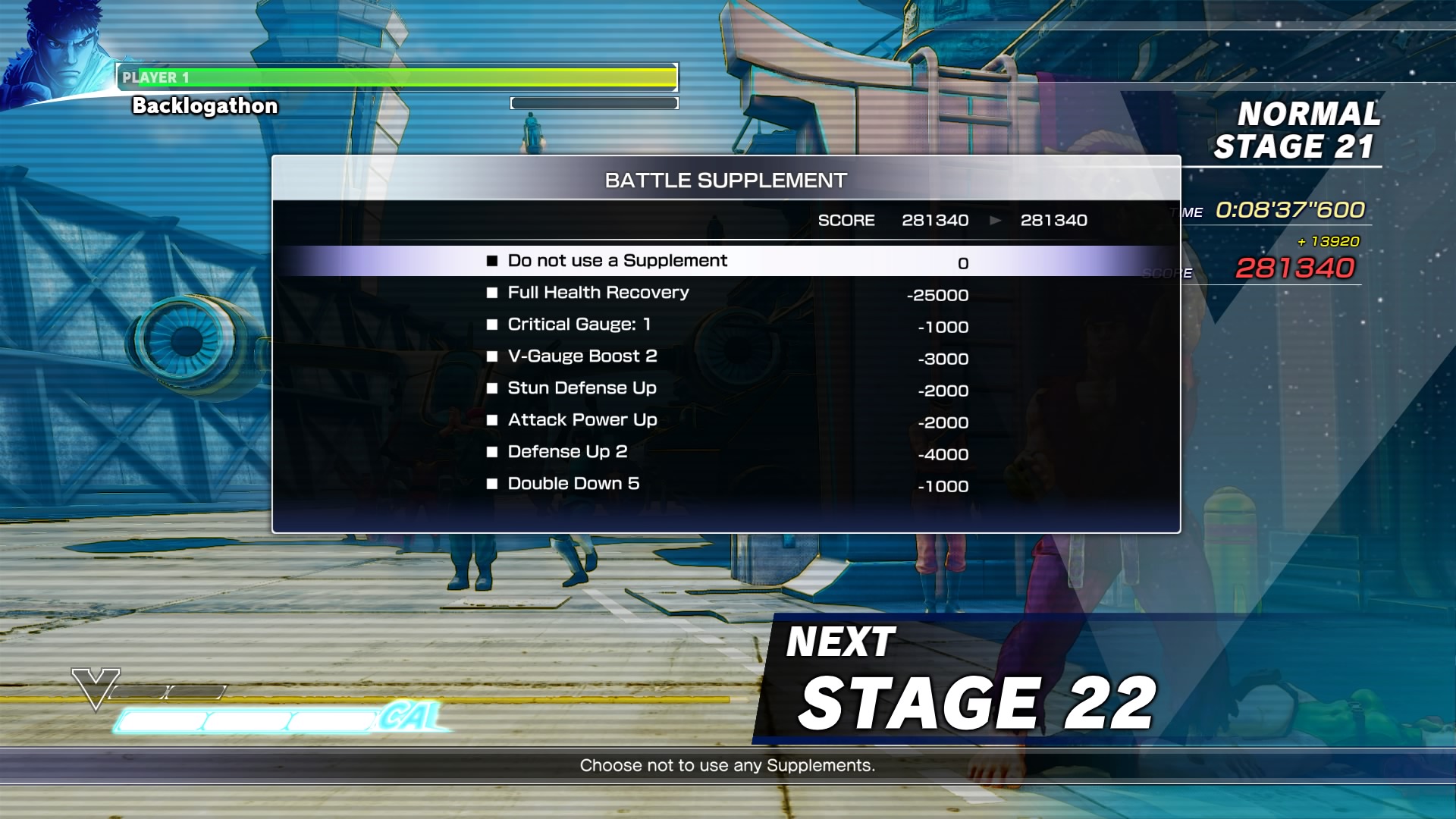 The available upgrades are different. They change from stage to stage, and the change appears to be completely random. You might get a 6,000 point tiny health bonus, or the monster 25,000 point full bonus, which is not really much more health recovery than the 15,000 point one.

This means that you can’t reliably budget from round to round, because you don’t ever know how many points you will need to get the boost you want. On top of this, it leads to some pretty tragic moments. How many people have run into this going into the final rounds of a Survival run? 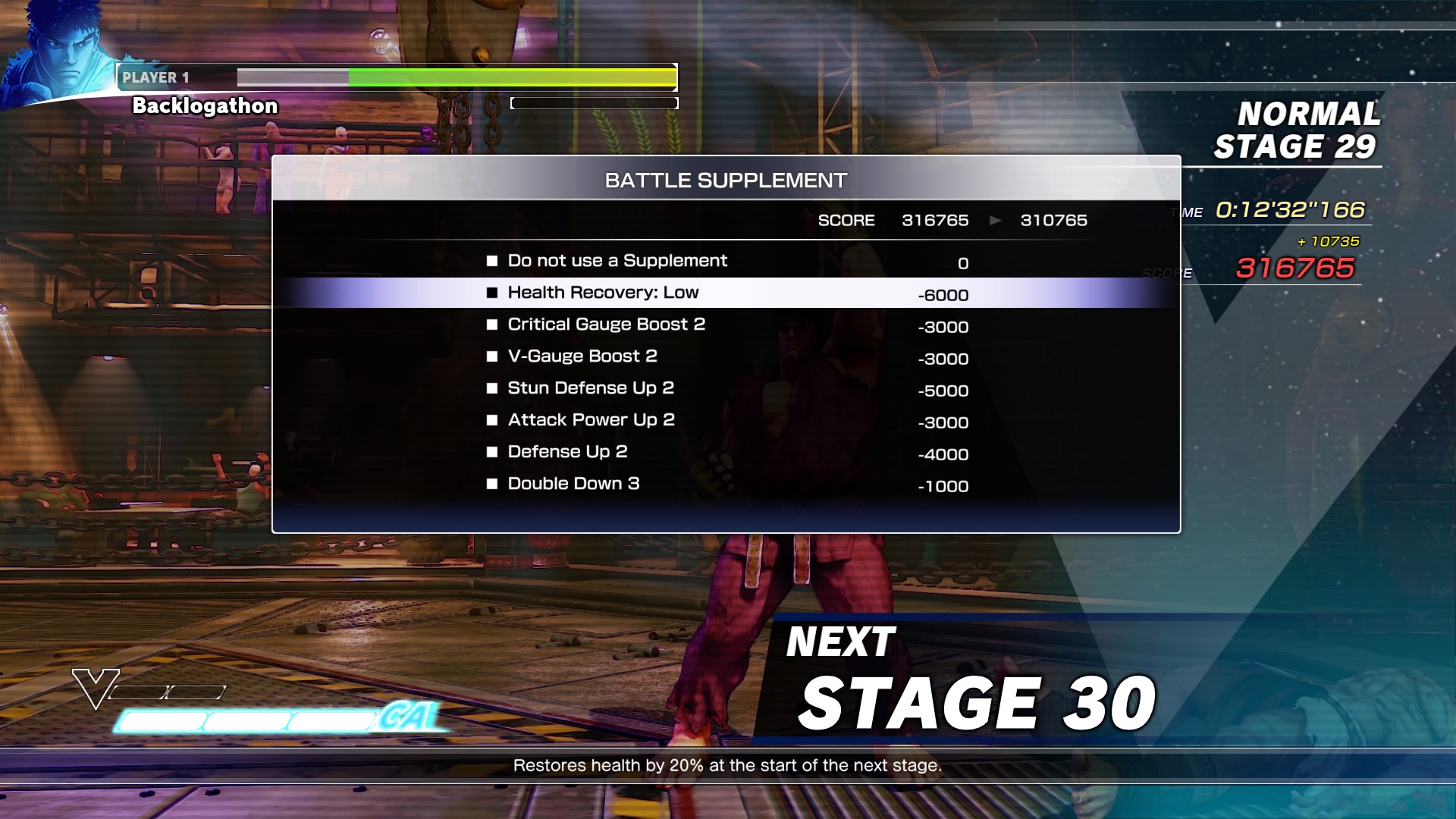 For the one round where I probably really need it, the only available health upgrade is the smallest one available. I had a run yesterday where only the Low health refill came up three stages in a row.

This kind of design is nothing more than annoying and frustrating for someone who just wants their character to have a signature color. It’s forcing people to play a mode that purposefully ignores several key principles of playing fighting games instead of organically putting those unlocks behind play time or any one of a number of ways you could release them over time to reward people for playing the game.

Because the Story mode that shipped with Street Fighter V only takes maybe an hour or two to clear for all 16 characters, this moving color unlocks—and especially the fact that they are per-costume and time-consuming—smells of padding the single-player content available at launch, but in all the wrong ways.

Casual players are not going to grind out a mode where if they fail at the very end after 15 to 30 minutes of investment, they get nothing.

More dedicated players are going to grind out the colors they want only grudgingly and hate the designers for the privilege.

Both groups are probably much more likely to end up paying real money for the unlocks—which might just be the intention behind this in the first place. (And would be shameful if so.)

So What Would Have Been Better?

Find ways to get people to play, but play the way they want. Put it behind matches played, like Street Fighter IV did. Put it behind the apparently meaningless character or player levels that Street Fighter V already has, but do it in a more intelligent way like Killer Instinct has, where you get new colors, titles, and icons just by using characters and playing well, earning XP.

(Not the first thing KI has done really, really well. Should talk about that more later.)

From a design standpoint, I understand that you want people to play your game often and for a long time. If you want to gate content behind play, that’s fine. Just do it in a way that rewards players for playing the way they want to play, not hoops they need to jump through because you say so—and especially not in a mode that actively teaches bad tendencies for the real way your game is meant to be played. 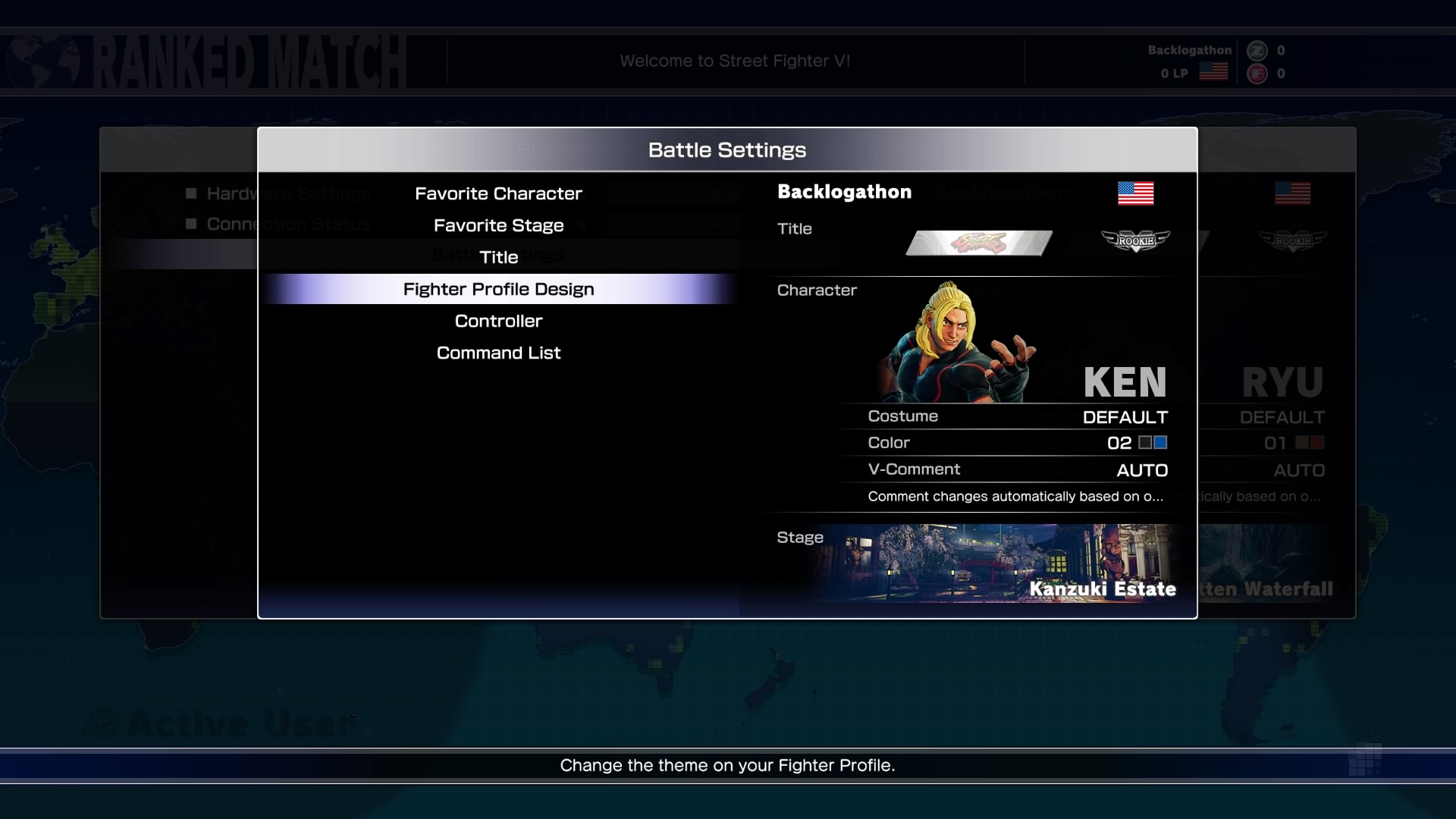