Last Saturday, Darren Wilson, a Ferguson police officer, shot and killed Mike Brown, a teenager. The following days were a tempest of flared emotions, militarized police action, protests, and controversy. Unbelievable images flashed across my television of riot-geared police firing crowd control measures into the streets of Ferguson, making it look and feel like a military occupation.

As I type this, the situation is still unfolding. Further statements have been made. Facts are slowly being revealed and uncovered. More are to come. The picture of what will happen is still forming, but the mood at the protest sites is calmer and the police presence more reserved and less armed.

This past week is now a part of the history of St. Louis, for good or ill. It is something we will—hopefully—remember and from which we will learn for the future. With that in mind, I took the opportunity to go to the site and witness it for myself, to record the scene and see the community affected by these things.

I first went to the QuikTrip where most of the protestors were gathered.

It’s the source of most of what you associate with the event. There were loud protests most of the time I was there, led by a woman with a bullhorn. They alternated between the “hands up; don’t shoot” and refrains of “we’re not scared”.

Most people milled about, talking with each other and with various people who held recording devices as they interviewed others. There were casual conversations and serious statements about the events of the week and wondering what could be done.

There were many signs, many t-shirts with sayings and slogans, some of them written using large marker. The crowd was composed of all ages, old and young. Some of the people there brought their children along and were explaining the situation to them as best they could.

I was thanked for being there. I was asked by a school student taking notes on the situation what I would do to help prevent such things from happening in the future. People asked me if I wanted something to eat or a bottle of water. Everything felt of community. They were engaging. I felt welcome. I was at one point hugged rather forcefully. :) People were distributing and serving food and water in an organized fashion and volunteers were plentiful.

The media had arrayed their satellite vehicles on one end of the QuikTrip parking lot. 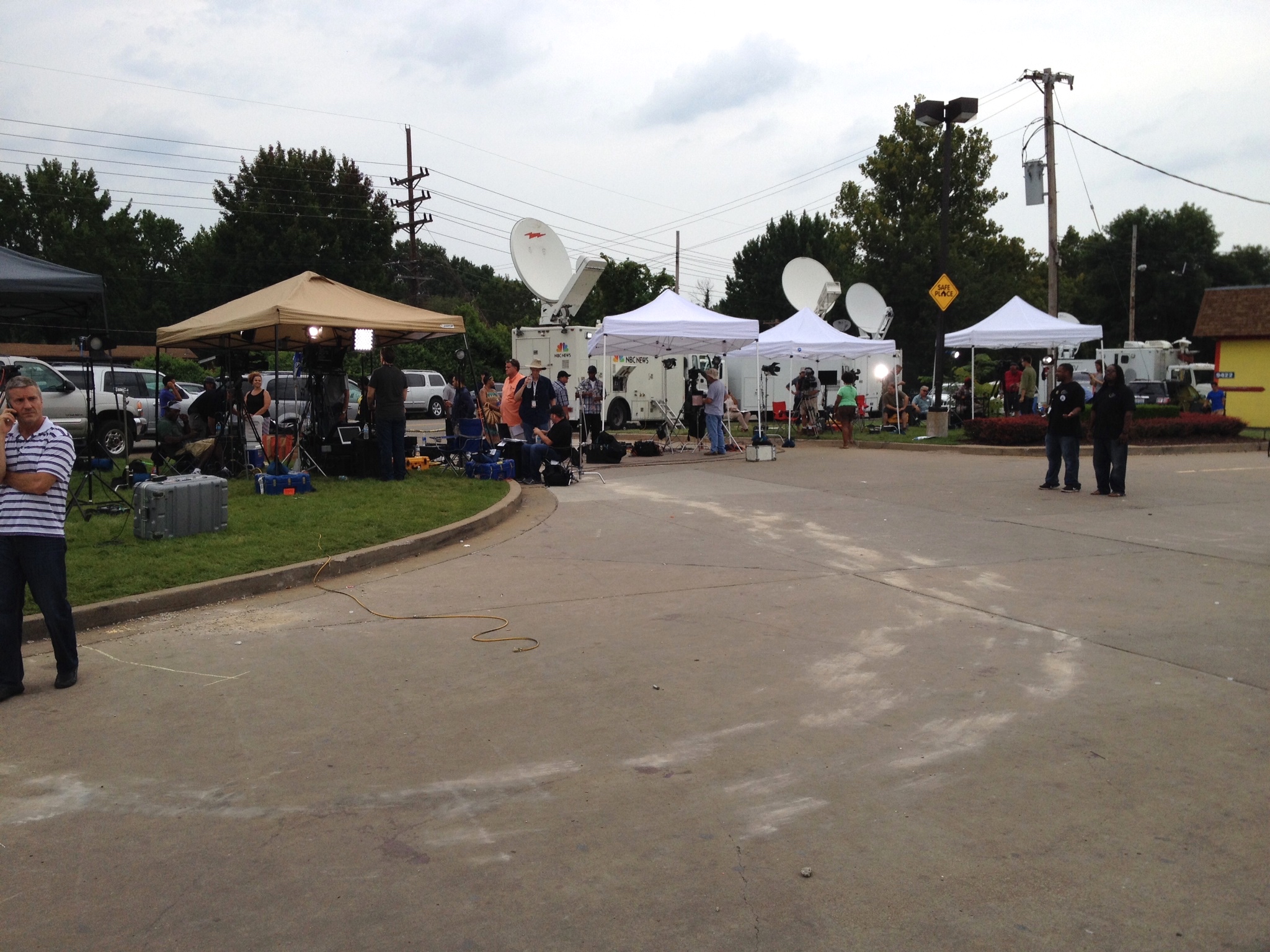 One thing the local media provided me with was a stark contrast to one of the more disturbing images from the previous week. Instead of a sniper perched on top of an armored truck, now we have this on the scene: 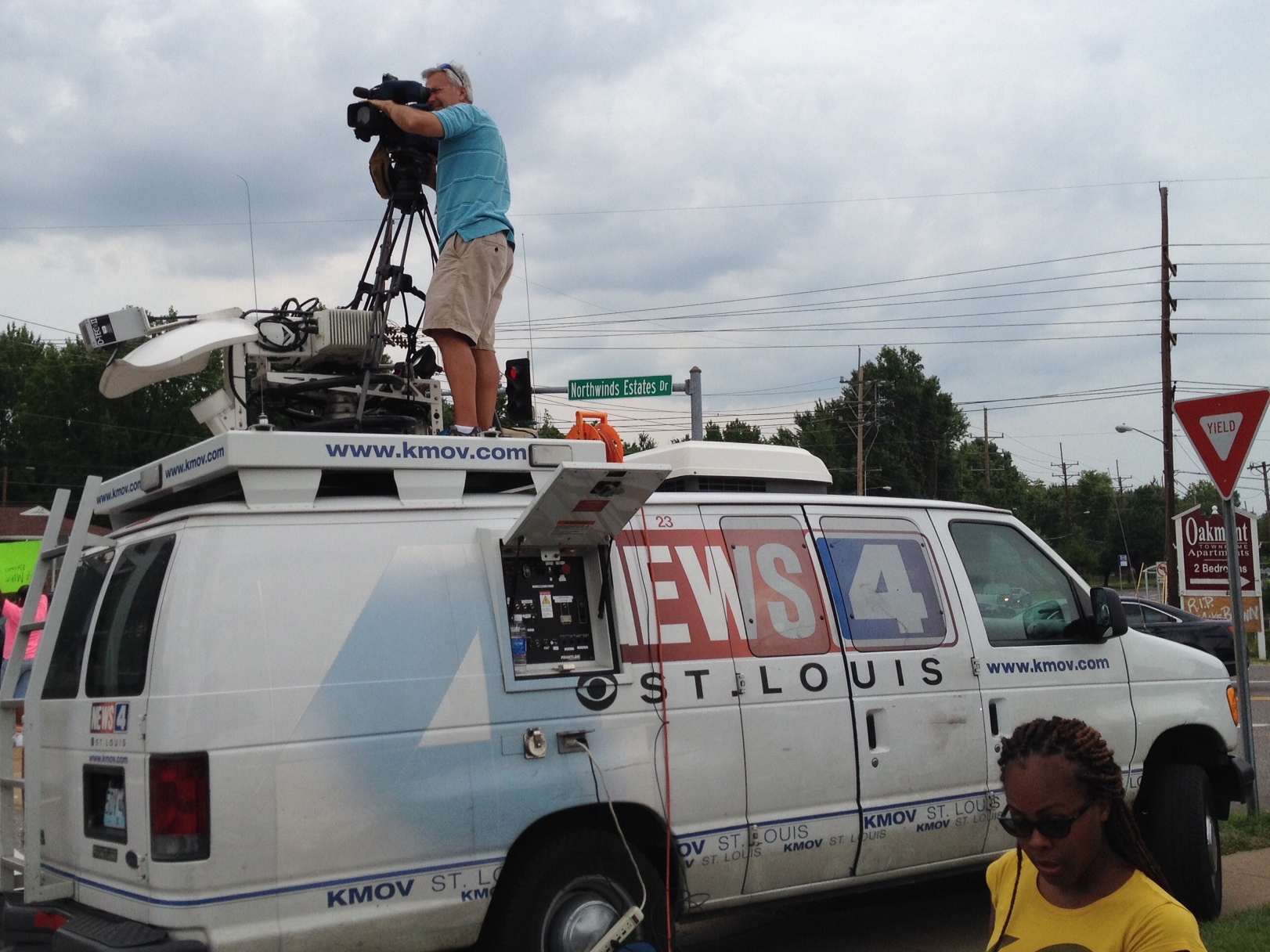 The immediate sign of expression from the people—other than the audible signs of the protesting and the cars honking in support—was the paint and chalk everywhere in the QT parking lot.

Some were signs of support. 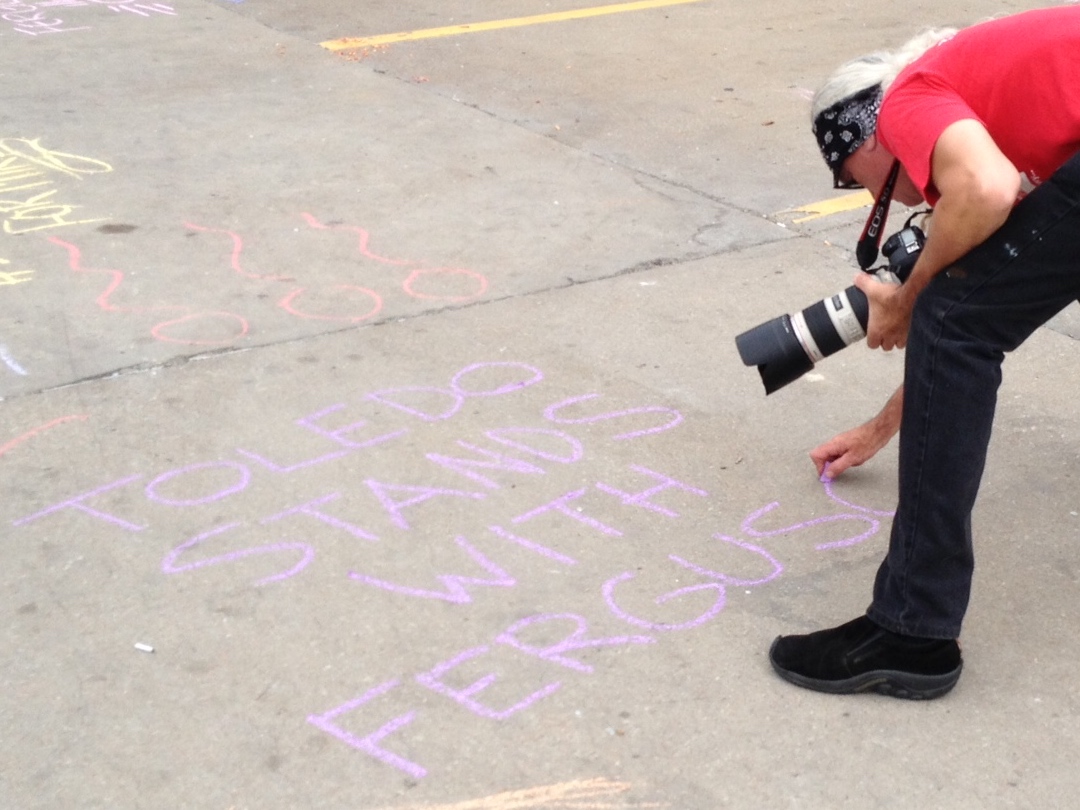 Some were expressions of frustration and a desire to be heard and recognized.

Some were out of loss—of the life that was taken.

There was a desire for peace. 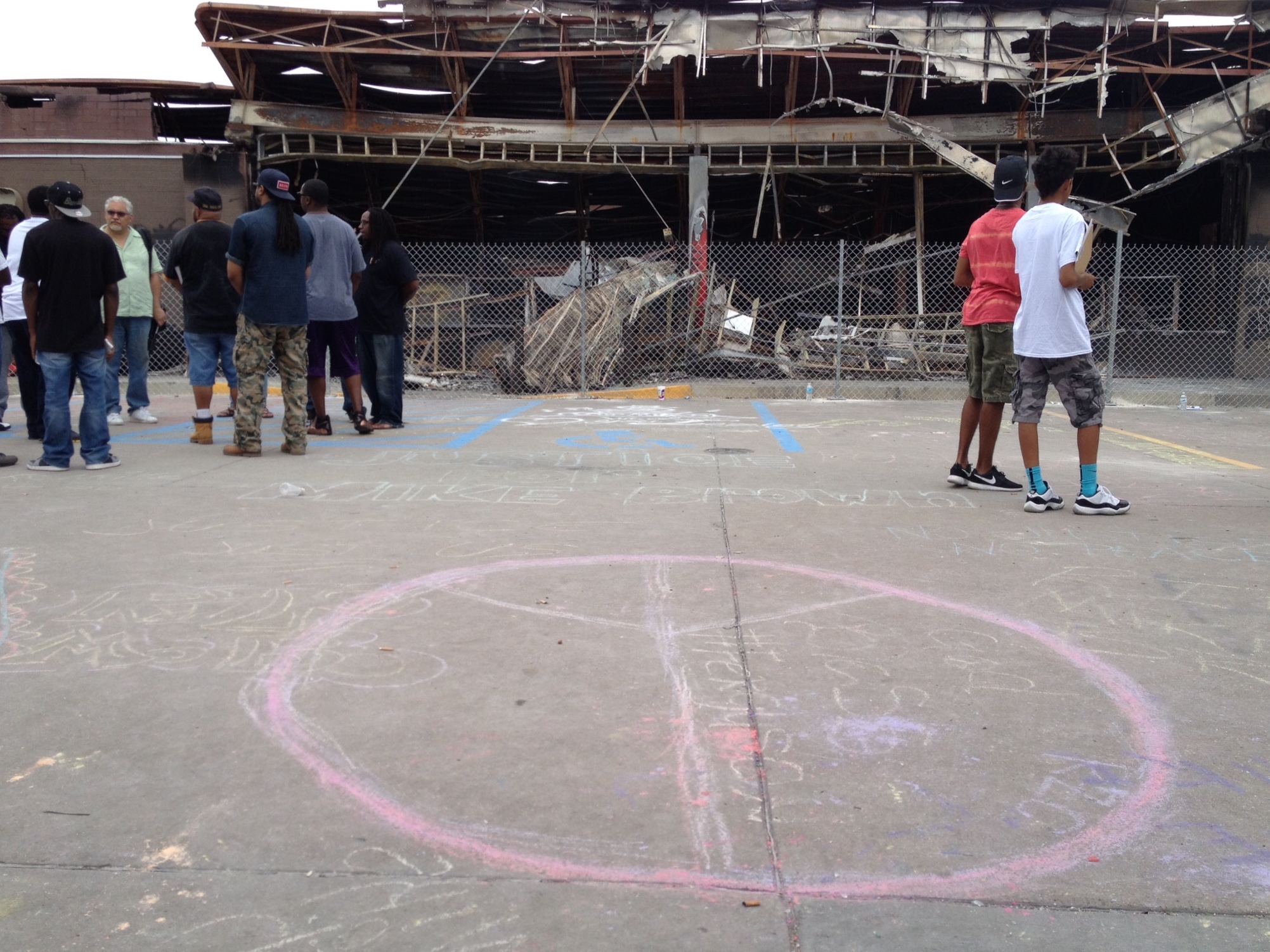 But there was also the undercurrent that flows under this all—the distrust of the police and anger regarding their actions.

From there, I went to the apartment complex where the shooting had taken place. There were families and volunteers there, making and serving food and offering it to everyone who came by. They’d set up grills, huge buckets of ice with water and other drinks for the children of the neighborhood, and tents. One man sat under a tent with a chess set on the table in front of him. 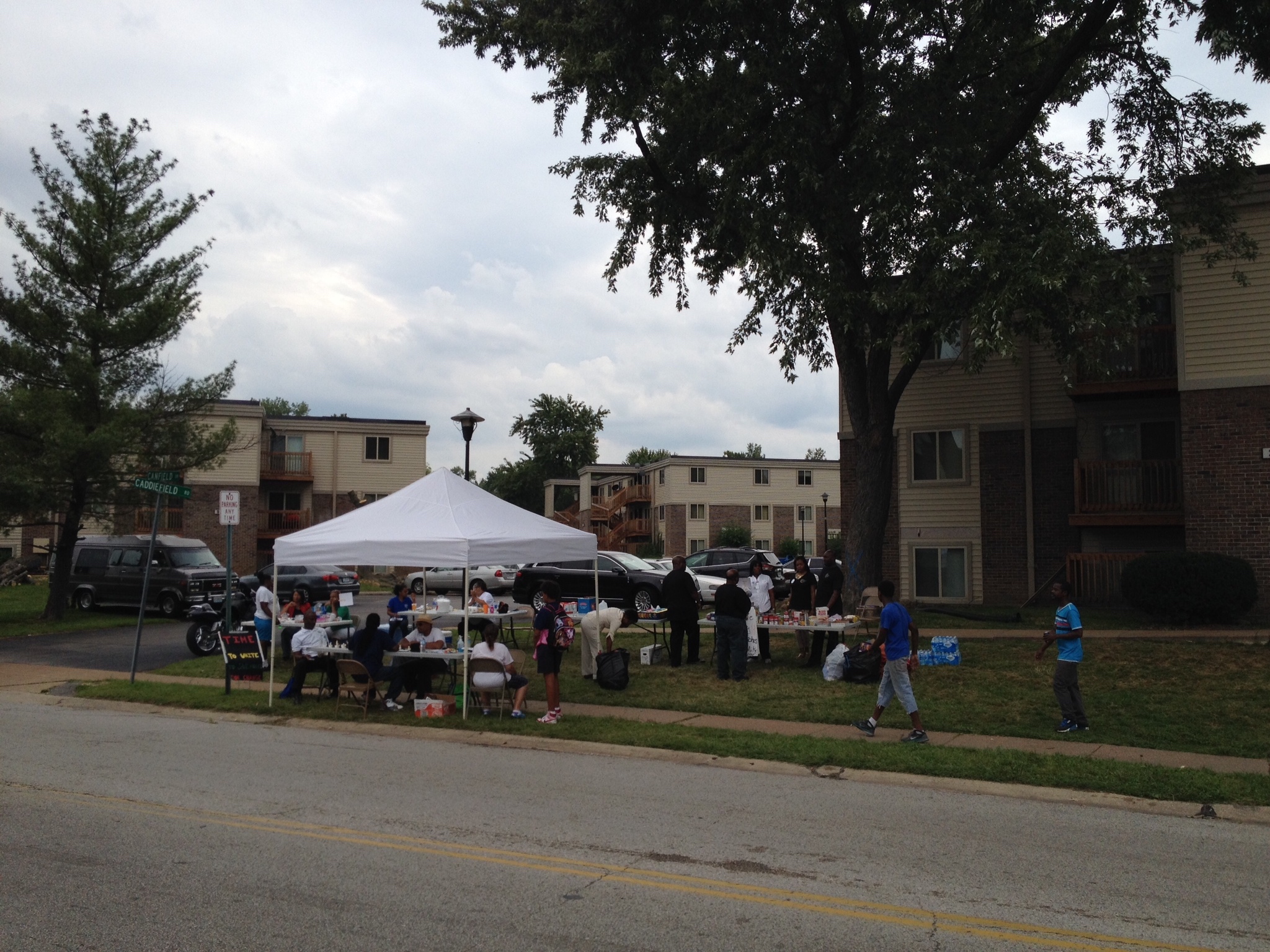 If there was a feeling of community at the QuikTrip, it was even more pronounced at the apartments. This was especially marked given that the scene of the shooting was mere yards away.

And the sign that has been so prominent in news images was still there, resting against a tree across from the memorials that had been placed. 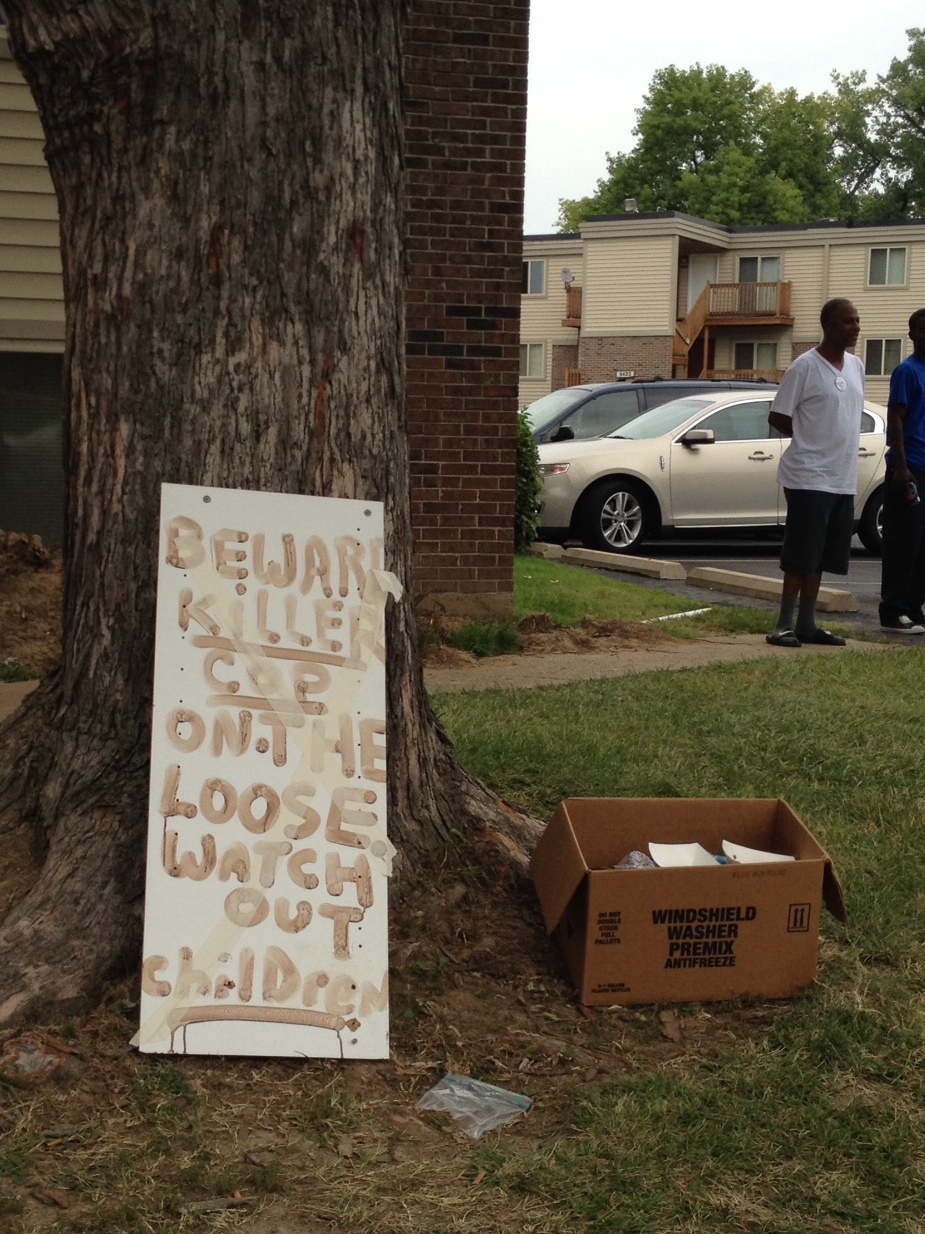