I realize that not everyone who reads may have an understanding of what Rock Band is and why it’s perhaps one of the greatest timesinks I’ve ever run across. I post often about it and will even throw up YouTube videos of note charts for songs I’m really interested in. For those of you who might need a small primer, I present to you this series of videos and explanations.

Rock Band is a “rhythm game”. What that means is that you are handed some music in the form of a track playing on your television courtesy of a video game system. You are also handed a plastic instrument. The first game to tackle this idea handed you a guitar. In Rock Band, there are four instruments: Guitar, Bass, Drums, and Vocals. Each plays slightly differently. The goal is to hit the right “notes” within a certain “window” of a graphic crossing your screen.

The game comes on a disc with about 80 songs, and there are weekly releases of downloadable songs you can purchase and play. The songs cost $2 each, which is a steal considering you’re not only hearing the music, but you’re also “playing” it.

To save those of you who might not want to load everything, I’ll put the rest behind a cut; please read on if you are interested.

To begin with, let’s take a look at Rush’s “YYZ” (the track that began this conversation in the first place). First, remember that it has no vocals, but those are simply accomplished with a microphone and a karaoke track across the top of the screen.

You can play Rock Band either by yourself or simultaneously (either in the same room or over the Internet) with up to four people—one for each instrument. The Guitar and Bass players each grab a plastic guitar controller, which looks somewhat like this: 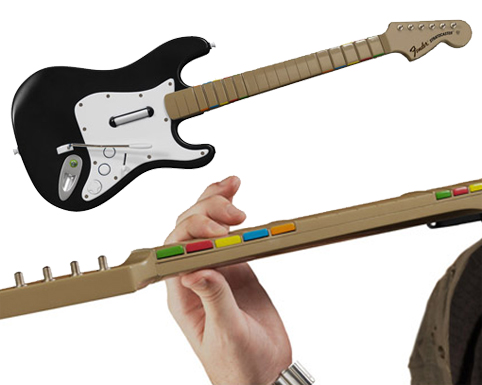 There are five “fret buttons”, each with a color. There’s also the “strum bar”, which is located where you’d think, and a whammy bar that you can use to build a power-up meter during sustained notes. When you play, a series of “notes” moves down the screen towards a line. When the notes hit the line, you are supposed to hold the fret button indicated and strum the bar. Sustained notes are held by keeping the fret button depressed, and you can even hit chords by holding more than one button at once.

(The smaller, square-shaped notes are “HOPOs”, or hammer-ons and pull-offs, which don’t require you to strum, only to be on the correct fret button at the correct time. And you have to have hit the previous note.)

Bass works much the same, but rarely has any solo sections (denoted by a blue background on the note chart and a percentage meter as you play it). Here’s the Bass chart for the same song:

(YYZ has a better Bass track than most songs.)

Drums are slightly different. They have only four colors in their “note track”, but an orange line that cuts across the whole path sometimes. The four colors correspond to four drum pads—which you strike with real drumsticks—and the orange line stands for the kick pedal. The drums look like this: 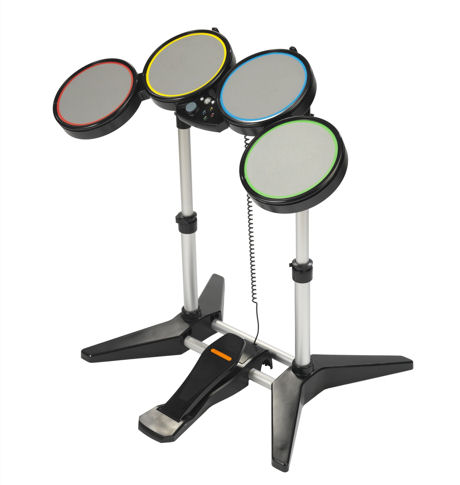 Drums are much more difficult to pick up in general. While decent video game skills can get you by with the guitar stuff for a while, you’d better have some honest rhythm skills if you want to pick up the drums. Here’s the drum chart for YYZ on Expert (which is kind of unfair, really—and the guy in this video is using a “pro” drum set that costs about 400 bones):

This guy even hits the fills really well. (You can freestyle on the fill sections, which have broad bars across the note chart.)

If you want to get really meta, here’s Rush playing Tom Sawyer in Rock Band (backstage on the Colbert Report):

I was looking for a full band video to show you as well, but as I can’t find one of a decent quality on YouTube, instead, I leave you with one of my favorite difficult guitar tracks: