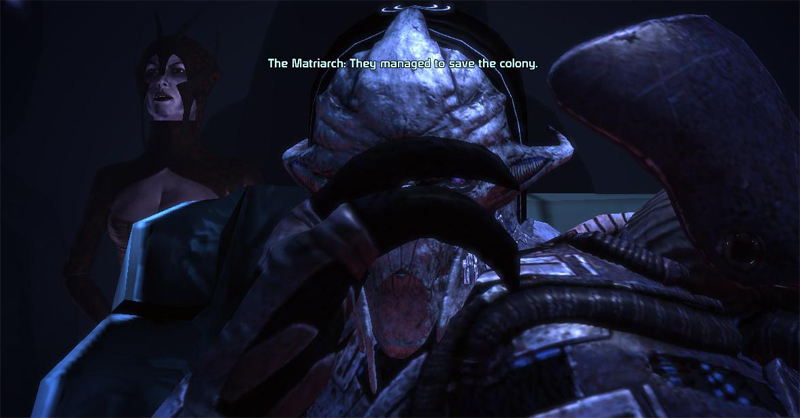 You may or may not have heard, but a little game called Mass Effect 3 came out a couple of weeks ago. It has an ending that has proven to be quite the topic of conversation. I should know this because I posted a few thousand words on that ending myself.

But the conversation surrounding it has just become ridiculous and it’s getting harder to discover the signal amidst the noise. It’s become a conversation of extremes. And I think that calmer and saner discussion regarding the merits of such an impactful and significant series is being overshadowed by sniping and overreaction.

Please stop with all this nonsense about asking (in your words, “demanding”) a new ending to the game, either though a change or a tack-on DLC. What you have is—for better or worse—the experience that Bioware crafted over a very long time and with years of hard work. It’s how they chose to end things. Like it or don’t, say that it was a good ending or don’t, but don’t get all crazy and start expecting that a developer is going to make a huge change just because you got angry.

What you are doing is limiting Bioware’s options for the future of the franchise, not creating more of them.

(Aside: whoever decided to turn everyone’s internet-rage into a force for good by raising money for Child’s Play, good for you. Well done.)

Stop accusing reviewers and the enthusiast press of being bribed or otherwise coerced into defending Bioware’s decision or giving the game a good review. These people are professionals (most of them, anyway) and they played the same game you did. Maybe they came to different conclusions. Maybe they are defending Bioware’s right to having ultimate authority over the creative process of the game. It’s ludicrous to think that they are just a loyal dog being walked by EA PR.

If you don’t like what’s being written about the game, write about it yourself. A good blogging service is free. Words are free. Sit down and write about it in an intelligent fashion. Encourage discussion without being a jackass.

To the Enthusiast Press/Game Journalists:

Please stop sniping at people who are getting upset about the ending and say something about it. Your intense defense of the situation is only perpetuating the poor discussion and contributing to the zeal of those who are trying to demand an ending. Write about the situation without descending into telling people that they are being dumb for speaking their minds. Rise above the trolling.

Did you like the ending and think that it has merit? Write about that. Write about your reaction to the ending and why you think it was fitting as closure for a series that’s been around for nearly an entire console generation. Do it without assuming that people who are railing about the ending and requesting a new one are idiots.

Do you think this is a question of creative license and about how a developer or studio should not be afraid of fan reaction when crafting the end to the story that they created? Write about that.

There are deeper and more interesting stories at play here. Find them.

I should probably sit down and write my thoughts on Mass Effect 3 at some point as I view it as one of the high points of the console generation and think it’s a great game despite my misgivings about the ending and how it was handled. I have sympathy both for people who found the ending ultimately unsatisfying and the people who invested large amounts of time and sweat into creating such an experience.

But such a thing deserves better discussion than what is currently dominant.

I’m interested in seeing where they go from here, and you should be, too.