Chris Anderson is the editor-in-chief of Wired.

I don’t expect that to draw you in for a very exciting post. What I do want to share with you is that he believes that the future of commerce and business, especially over the Internet, is in giving things away for free. An article about this very subject was the cover story in Wired about a year ago, and Anderson is writing a book that will be out in July called, simply, Free.

Pay attention to this one, because it’s possibly very revolutionary and is likely to turn some heads. He thinks you should be giving stuff away in order to make money.

He’s not necessarily talking about the Gilette model, either:

Thanks to Gillette, the idea that you can make money by giving something away is no longer radical. But until recently, practically everything “free” was really just the result of what economists would call a cross-subsidy: You’d get one thing free if you bought another, or you’d get a product free only if you paid for a service.

As examples, he mentions that after experimenting with paid content, both The New York Times and The Wall Street Journal are now free to read on the Web (excepting some information in WSJ). At the time of this writing, I can even browse NYT on my iPod touch, using an application they wrote that is also free to download.

Anderson is speaking chiefly about digital goods and how they are distributed and sold. He references six categories of “free” in the marketplace:

The challenge in an increasingly technological and digital marketplace is that so much of economics has been based around real-world scarcity. There were only so many books that could be printed, or so many televisions that could be made, or so many copies of the newspaper. Now, in many business sectors, the only scarcity that exists is artificial in nature. Digital copies and on-demand services mean that scarcity doesn’t matter anymore, because products and even some services never go out of stock or have to be re-manufactured to meet demand.

Anderson argues that the decrease in the cost it takes to market or distribute something means that another, new business model is on its way—something we haven’t even quite invented yet. Before you discount his argument, let’s remind each other that Chris Anderson is also the guy who wrote The Long Tail, which is a book very nearly taken as gospel truth in the business world. I think it’s safe to say he knows what he’s talking about.

He’s also willing to put his money where is mouth is. He spoke in front of a live audience with Guy Kawasaki at SXSW this year, and he had this to say:

On July 6, you will all have a free copy of Free under your … mouse button.

He goes on to say how he believes this book is going to make its money:

“I will give you a hypothetical scenario by which a book could be free,” he said Tuesday during the SXSWi panel. Describing sponsored paperbacks with company logos printed on the front that are distributed at conferences, or audio books distributed as MP3 downloads, Anderson pointed out that the marginal cost for some forms of distribution approaches zero — therefore, he said, the cost to the consumer should be zero.

With printed books, the cost is not zero. Anderson says that he would bank on some percentage of readers deciding to upgrade to the traditional printed book version.

This isn’t an entirely new idea. Seth Godin did this before with Unleashing the Ideavirus, which was given away as an eBook for the price of zero dollars and zero cents, and ended up becoming a very successful book in print sales. Godin even worked actively to encourage people to email, upload, and otherwise share that free eBook with as many people as they thought would be interested in it—and it paid off. It’s one of the things that has catapulted him to Internet superstardom.

Anderson’s argument for delivering at least some content for free is that it has untold secondary benefits, in terms of goodwill, notoriety, and reputation. He says that giving away some of your stuff for free is what can create even more demand for the products you already have that can make you that money. 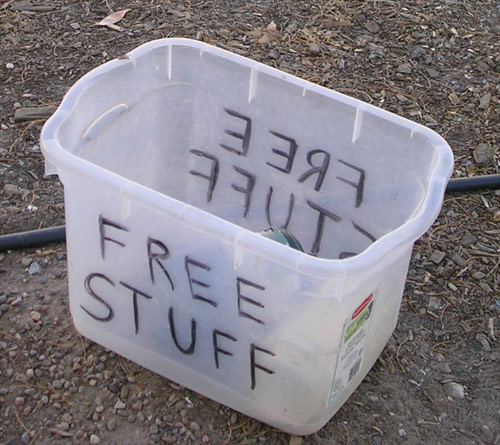 We’re already seeing the beginnings of this approach in the publishing realm—and very recently, the Christian publishing realm. Crossway is giving customers a free PDF download of any print book purchased through their Web site in a completely unencrypted and un-DRM’d format. They are also delivering the basic ESV Bible text on Amazon Kindle for no charge. They offer their Bible translation for free on their Web site and even allow bloggers and other Web users to access an API that lets them insert the text on their own Web sites at no charge.

What’s the potential benefit of this to Crossway? Why give away one of your primary products for free? Why give someone a free eBook with the purchase of a real one? Giving away your basic Bible translation creates demand for your study Bible—a product that is not free, even online (and to boot, if you buy the print study version, you receive access to the Web version for free!). You’re also much more willing to read the translation and give it a try if you didn’t have to pay for it. This opens the door to additional titles by the same publisher that are based on the text, such as daily devotionals or other materials. Giving a customer a free eBook with the purchase of a print book gives them added flexibility in their use of the book they bought. It also encourages them to share the book, and even though Crossway specifically mentions on their site that doing so is a violation of copyright, and your order number is placed as a watermark at the bottom of each page of that PDF, it is difficult to believe that they have made this move without knowing and even desiring that people might “share” their eBooks with one or two trusted friends in the hope that those friends would then want a paper copy of their own—something Crossway does indeed make money from.

Thomas Nelson has also entered into the economy of free. Take a look at the Nelsonfree program, in which the purchase of a paper book also grants you access to three unencrypted eBook formats of the same title and one non-DRM mp3 download of an audio recording of the same book—for no additional cost! All this just for following some instructions on the back cover. This is made possible for exactly the reasons that Anderson posits—the creation of the eBook formats is at negligible cost for the publisher once a print book has been made, and audio files aren’t difficult to make, especially if an audiobook is already on the schedule and is sold separately.

TN’s Book Review Bloggers program exchanges a free copy of a printed book—in many cases a $25 or more value—for a review on a major retailer’s site (usually Amazon) and a review on a personal blog. The customer receives a free copy of a book, likely one that they were interested in anyway, as the reviewer is the one who selects the book they will receive. Thomas Nelson receives some authentic, personal publicity from a reader, sometimes even pre-release, and already has a critical mass of reviews on retailer Web sites, which has been proven to increase conversion rates, as I’ve spoken of here before. The risk to Thomas Nelson is minimal: no more than a handful of gratis copies of a book. The potential benefits to this approach are staggering in terms of things like blog readers and Amazon/BN customers buying on account of almost-always positive reviews, Google PageRank increases due to increased mentions on blogs, and goodwill created among those who are reviewing the materials.

Major publishers are turning to services like Scribd to get eyeballs on their books. They’re placing excerpts up on services other than their own Web sites, and in some cases you can read the entire thing for free or download an unlocked PDF if you’re willing to sit in front of a computer. They’re thinking you might become interested and then purchase a copy when you get a chance—which is likely to happen. Some publishers have their entire catalogs on Google Books, free to search and to page through, because on the same page is a link to the publisher and to retail sources for buying that same title. Everything is built around converting free digital views on computers to paid eBooks on reading devices or purchased print editions of the same title.

Offering book excerpts to entice readers is nothing new – Amazon and Google have been doing this for years, and Amazon’s Kindle allows readers to download book samples to their devices for free. But these options aren’t conducive to sharing content that you’ve discovered on the web, as they don’t allow your to embed them in your blogs and websites. Scribd’s iPaper Flash document viewer is built to do exactly this, so inserting a book excerpt into a blog or even an author’s site is easy.

Authors also benefit from increased exposure on Scribd itself, which sees a monthly readership totaling as high as 50 million.

Some might write these moves off as some kind of grand experiment, but I think the writing’s on the wall: the free economy is here. Even the big publishers—the ones so often resistant to change and full of inertia—are moving in a new direction.

What do you think? Would getting something for nothing encourage you to purchase something else? Would being able to browse the entire text of a book at your leisure or hearing a review from a trusted friend or colleague be a positive influencer on you to purchase that material?