Look, I’m not going to link to much that’s Penny-Arcade very often. I might never again. And I might eat my hat later for doing this when something untoward happens at Pax at some point. But it can only be a good sign to read this:

You can’t threaten people with death, and I resent very strongly being made to type that out.  Not only can you not do that because you can’t fucking do it, it has the power to obliterate everything else you say.  In fact, it obliterates everything the people around you are trying to say.  That’s what has happened now.

Then again, even a stopped clock and such.

Of course, it wouldn’t be Penny-Arcade without getting at least one thing wrong about it, and here it is:

I know that this situation is more complex than anyone is willing to enunciate.

No. No, it’s not. There’s nothing “complex” about this situation. It has nothing to do with anything other than people being detestably mean to other people for no other reason than they dared state their opinion.

And there’s also this:

When your media doesn’t represent you, or actively attacks you as it has here, it’s not your media.

Hate to break it to you, but “attacking” from the media isn’t what’s happening here, either. What they are doing (though not the games media, really) is shining some light on the real problem.

I can’t disagree with this, though:

You’ll have to make your own, and it’s not impossible.  It’s more possible now than it has ever been in human history, and you’re reading an example of it at this moment.  Go your own way.

The problem with arguing this to the GamerGate crowd is that they are fighting against people who are doing exactly this.

I was going to link to this article from Business Insider about the whole GamerGate nonsense (and I have a link dump post on it coming soon), but this comment on that article pretty much sums up the attitude of a lot of the pro-GG community: 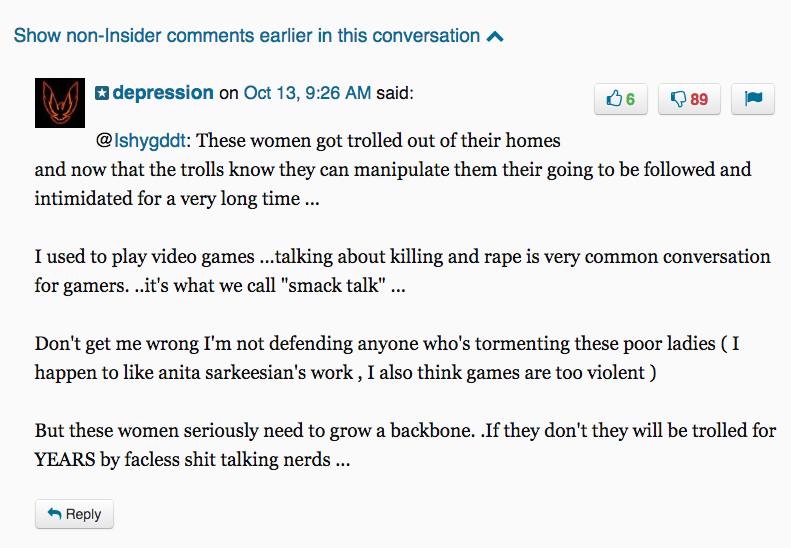