“With the first link, the chain is forged. The first speech censured… the first thought forbidden… the first freedom denied–chains us all irrevocably.”

–Jeri Taylor, writing for the character of Captain Picard in TNG S4E21, “The Drumhead”

Take two minutes and watch this video. See how the lead rider bails so early in the race and ends up so far away from his bike that most people would just give up and ride it out for third.

Not this dude. He’s in it all the way.

Charles Randall is someone I consider to be an internet friend. He is making this game. I am very excited by it and you should be, too.

Oh, and he said this:

Below has no text, no dialogue, no hints, and no hand-holding. 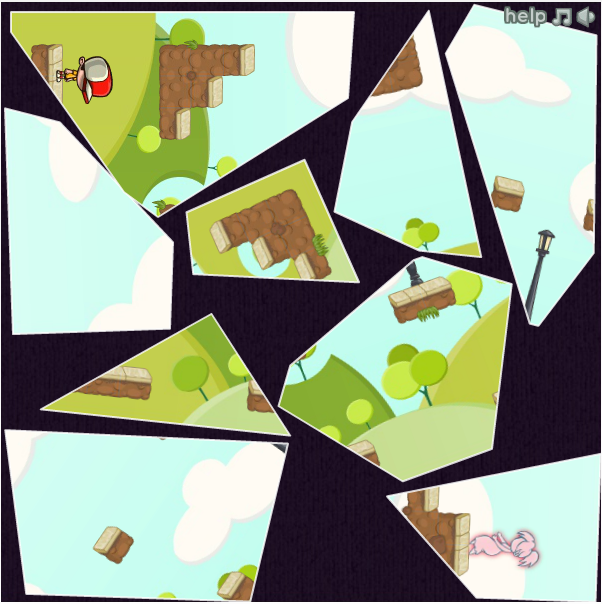 In going through my Instapaper reading for the day/week/month/quarter (the backlog is really that long at this point) I ran across a quick blurb about a short Flash game called Fractured over at Kill Screen Daily:

It’s a simple platformer, with a clever caveat – the 2D screen is arranged in a jumble – the whole is divided into mismatched slices and strewn across the screen. Each level presents a new maze to power through, allowing the player to naturally connect the screen shards in his/her mind until it’s obvious how to muddle through.

I decided to give it a shot and see if it was as good as it sounded while I was sitting and supervising the kids’ game time this morning. Just a bit later, I had cleared both the normal set of levels and the challenge set of levels. It’s an interesting concept for a 2D platformer; instead of messing with time or other such mechanics, it plays with your sense of location by jumbling around the display of the level and making you figure out how things are connected.

The story feels like it needs some explanation or insight—it appears to basically exist for purposes if giving you a goal, but it feels like it has some intent behind it—but it was a pleasant diversion for the morning and a neat concept.

It would be interesting to see a larger game that, à la Braid, takes this first concept and then twists it in different spatial ways to create other experiences.

Fractured is game 2 out of 52 completed for the year (more on what I’m working on playing later), and if you’re looking for a quick and satisfying diversion, I would urge you to give it a shot.

So it turns out that Frog Fractions will work just fine so long as you aren’t using Safari (coincidentally the finest browser on earth). I switched to Chrome and it worked great.

If you never played games in the 80’s on, say, an Apple ][, it won’t make as much sense to you I don’t think, but there’s a little something for everyone in the game.

The first game I’ve finished in 2013, and definitely not the last. It’s not often that you run into something that riffs on MECC software, Star Fox, text adventures, bullet hell shooters, and a frog becoming President over a bunch of bugs all in the same night.

As a game, it’s a bit uneven (I had a hard time with the bullet hell stuff), but as an experience and a joyride through my gaming nostalgia, it was a lot of fun.

(And thanks to Jim Crawford—the game’s developer—for not getting too pissed when this Dvorak snob bitched at him on Twitter about what ended up being Safari’s problem.)